Vacheron Constantin, confident in its own future


Vacheron Constantin, confident in its own future

At the beginning of October 2011, Vacheron Constantin announced a plan for investing CHF 100 million between now and 2020. On the menu are: a 5,400-square-metre facility in Le Brassus, in the Vallée de Joux, at a cost of CHF 30 million; an extension of the Geneva headquarters, designed by the famous architect Bernard Tschumi and inaugurated only in 2004, which will be completed in two stages, a first step of 50 per cent from between now and 2014-2015, plus a second step for another 50 per cent by 2020 at a cost of CHF 40 to 50 million; and the remaining CHF 20 to 30 million earmarked for the purchase of equipment, production tools, and training. With these new facilities, Vacheron Constantin is planning on doubling its workforce to 1,300 employees, which is twenty times more than it had 30 years ago when its current CEO, Juan-Carlos Torres (whom everyone calls Charly Torres), joined the venerable watch house located on the Ile, in the heart of Geneva. In time, this major investment will allow the Geneva manufacture to increase production from its level of 17,000 to 18,000 watches this year to 27,000 to 30,000 timepieces. Charly Torres thus has great confidence in the future of Vacheron Constantin and enjoys the trust of the brand’s owner, the Richemont Group. Yet, he does not seem to be as confident in the global future of Swiss watchmaking in general, even predicting a slowdown in the sector in 2012 based on a remark he made to Bastien Buss in an article in the Swiss newspaper, Le Temps. This was subsequently taken up by Bloomberg under the title: Not so confident for the future of watchmaking. Is this then a contradiction?

Charly Torres: It is the job of the agencies to synthesise and to simplify. However, it is true that, while I am more than confident about Vacheron Constantin, I have certain doubts about the overall industrial and artisanal fabric of the watch industry as a whole. I am going to be a bit provocative here in declaring that the crisis of 2008 was not serious enough to really shake up the current comfort level. Very quickly, things took off again as if nothing had happened. Watchmaking only advances when it is under pressure. Now, today, we are again moving back along the “easy roads”.

ES: What do you mean by “easy roads”?

CT: Oh, there are many. Betting on China is perhaps the most dangerously travelled of the “easy roads”. Today, we can sell 100 per cent of our production in China, including Hong Kong—maybe even more. But we don’t. Other “easy roads” are the dependence on traditional retail as the only way to distribute the product, or counting on an empty avant-gardism in terms of content. Other “easy roads” involve forgetting about the product in a brand’s communication and marketing, or flouting a certain sense of responsibility, or neglecting training, etc.

ES: In light of the future, you say that we need to do away with the current comfort levels, but how?

CT: Let’s take the ridiculous arguments surrounding the Swiss Made at 50 per cent or at 60 per cent, for example. If the requirement were 100 per cent, we would be forced to think differently. In this case, we would be obliged to re-think the entire industrial fabric of watchmaking if we really wanted to keep the industry in Switzerland. In its day, Swatch was very successful in producing the Swatch timepiece, at the lowest cost possible but with the highest level of image at that time. Switzerland has many advantages—avant-garde engineering, advanced technology in all domains and materials, etc., as well as highly skilled artisans. We have to be careful not to think short term, not to launch into a sort of production tourism, always moving to wherever wages are cheapest. In a world adrift, with no reference points, it is reassuring to know the origin of a product. A luxury brand should mark its territory very clearly.

ES: Speaking of origin, you have stated that you want to have 100 per cent of your production meet the criteria of the Poinçon de Genève (Geneva Seal) compared with approximately 70 per cent today…

CT: This is one of the major reasons for the major investments that we have announced. Certifying all our movements, whose production will increase in parallel, with the Geneva Seal means making investments in equipment, of course, but, very importantly, it means investing in people. Because this is about excellence, it is necessary to perpetuate our labour force and keep our craftsmanship more alive than ever. This also means organising our production into sectors—adjusting, decoration, assembly, etc. Why? Because this is the essence of the early craftsmen, the cabinotiers, in which Vacheron Constantin has its origins. It is emulation by career, sharing savoir-faire and secrets... If we industrialise, we do so around the human element. We industrialise the process so that it allows the human element to be deployed in its full creativity. Quality of environment, flexibility, the speed of the processes and the relevance of quality control are the key elements in the ensemble. And, I want to emphasise, this investment is 100 per cent self-financing. But, it must also be recognised that we benefit fully from the expertise of the Group, which is very large, and from certain centralised services, such as, for example, a distribution platform with incredible logistics. This is an immense advantage.

ES: You mentioned distribution, and you have told us that one of today’s “easy roads” is to use only one type of distribution. What exactly do you mean by that?

CT: I am convinced that to expand, a brand must work in close cooperation with retailers but also be very attentive to the balance between its own stores and multi-brand retailers. We have grown with these retailers and we must share the profit with them. This is also a form of respect. This balance varies from one country to another and each time it is necessary to fine tune it. It is true that certain retailers are also asleep in their own comfort zone, but others have understood in time that they were real partners in the brand’s development. Contrary to what we sometimes hear, the large groups, or at least a group like ours, have a genuine long-term strategy. As proof of this, the CHF 100 million investment that we just announced was planned already in 2006.

ES: If we may, let’s return to the topic of distribution. You say that today you are in a “suffocation” situation...

CT: Yes, not only because we could sell more watches than we produce, but also because our growth potential is very high: there are many markets that are still underdeveloped or not developed at all, such as the Middle East, for example. But in Europe, we also must work at strengthening our presence. In Germany we almost have a shortage. The USA is a market that is now more mature for us, but we still have a lot of work to do there. This does not even count the countries where we are simply not present at all, such as Brazil and India where we are going to open our own subsidiaries.

ES: Let’s talk about the product. Don’t you feel that the watchmaking rigour and classicism evoked by Vacheron Constantin is in your favour in the current context? And in this respect, I am thinking again about China, a nation, it is often said, with classic tastes?

CT: I don’t know whether the Chinese have classic tastes or whether it was the large classic brands—who were the first to establish a foothold in the nation when it opened to foreigners—that formed the tastes of the Chinese. Whichever is the case, we can say that Vacheron Constantin has been a trendsetter in China and has imposed, along with others, a certain level of classicism. Following this, it has been the rest of the world that has returned to classicism. And, there is also the question of anteriority that counts for a lot. As the Chinese market opened up, we saw families come in with old Vacheron Constantin timepieces that they had kept like hidden treasures for many years. We were able to restore them and this created an enormous amount of buzz. Such are the virtues of classicism!

ES: How do you divide your collections?

CT: The current collection is arranged around three main axes—the barrel-shaped Malta, which will celebrate its hundredth anniversary in 2012; the round Patrimony timepiece; and the cushion-shaped Quai de l’Ile watch. To these three major divisions can be added the Métiers d’Art collection, which expresses the quintessence of our savoir-faire in the arts applied to watchmaking, and the Atelier Cabinotiers, which only produces bespoke timepieces. The latter is incredibly successful since this atelier alone employs 40 people. A new axis will be added at the beginning of 2015, which is made up of a family of rectangular watches. We must also add two lines with variable geometries: the ladies’ timepieces and the Overseas sports watch.Finally, we are continuing with the re-editions of the Historiques collection by re-introducing into the marketplace icons that disappeared many years ago. All this will be done, and this is a very important point, by respecting a growth rate that is perfectly mastered and totally controlled. We use the word “growth” as if it were a magic mantra. In reality, there is growth, and there is growth. Vacheron Constantin has been in great condition since 1755, so we are not about to start building on sand. 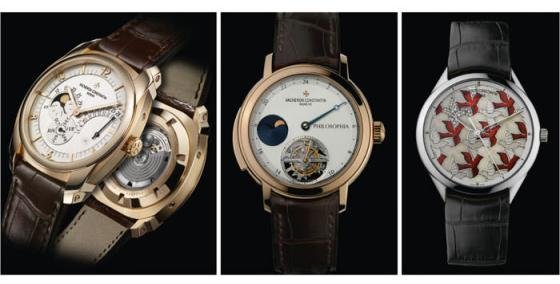