Eva Leube can claim to be Australia’s first bespoke watchmaker but she certainly enjoys a special honour as she appears to be the first to have arrived of her own free will. Thus she is a far cry from the English convict James Oatley who arrived on a transportation ship Marquis of Wellington on 27 January 1815.

The extant records are unclear why he was transported but it may have been as simple as taking possession of a few olives from which to extract his clock oil or some simple bed linen. Regardless, he quickly became the Keeper of the Sydney Town Hall Clock and was commissioned by Governor Macquarie to install the turret clock in the pediment of the Hyde Park Barracks which clock functions to this very day. His work soon included making long case clocks for the colony’s leading citizens. Notwith-standing this dubious colonial start James Oatley is now remembered by a Sydney suburb named after him, a railway station and some roads and parks.

Eva Leube working with the superb Aciera F1 universal precision milling machine. All the table and head movements can be by screw or lever feed and the machine, together with its wide range of accessories, is designed to enable the small workshop to cope with as wide a variety of super-precision work as possible. Eva’s workshop equipment includes a high-speed Swiss precision Schaublin 70 lathe with overhead milling capability. This legendary equipment is a mainstay of the atelier of bespoke makers across the industry.

Far removed from this, Eva Leube was born in Berlin, Germany in 1972. When she was 16 years old she began to study watchmaking and she recalls “it is a beautiful old handcraft in which I had a keen interest”.

Having a keen interest is one thing but converting this to a successful career of making bespoke watches is a very lofty aspiration re-quiring a solid gold determination to succeed.

This historical retrospective is the way Eva went about this:

Eva has gained her experience, working amongst some of the world’s best watchmakers in Germany, Switzerland, South Africa, the USA and Australia and over these years, she has restored countless wristwatches, pocket watches and clocks to an active and in many cases, a beautiful life. But now in Australia, sourcing services, materials and equipment creates a new adventure and in the meantime anything she doesn’t already have is available by mail from European supply houses. 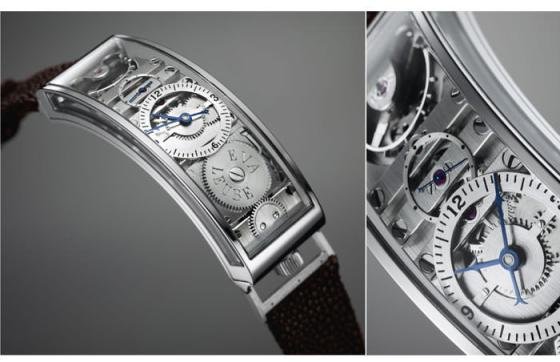 The curved forms of both the case and the movement present special problems of angular engagement of the various moving parts of the watch and requires special relieved angular milling to the wheel teeth. Note that the winding crown sits neatly between the horns allowing clean lines along the sapphire sides of the case revealing all the internal details including the free-sprung balance.

Eva set up her own workshop following the birth of her son Ari and named her first watch after him. Making a curved mechanical movement has its own particular problems and perhaps from a horological viewpoint this is one of the most technically challenging aspects of the “Ari” watch. All the parts must accommodate an angular engagement with the next functional part – wheels to pinions, escape wheel to the pallets and the pallets to the balance wheel. But the form of the case is also a major element of the shape and function of the watch and requires machining case parts from the solid block of casing metal – gold or platinum, a time-consuming and difficult process.

Eva Leube’s “Ari” introduction timepiece is unique for quite a number of reasons. The long contoured case fits snugly on the curve of the wrist much as a bracelet and it feels good and comfortable to wear. The case with clear sapphire windows allows a view of all its intricate movement parts and gives entertaining wonderment to its owner. She says she “always wanted a watch that curved to fit my wrist, and one where you could really see the movement. Many big watches lie awkwardly on the wrist – and a lot of beautiful watches, particularly traditional Swiss watches of the late 20th century, hide the mechanisms from the owner’s eyes.”

She exhibited the “Ari” watch at the 2011 BaselWorld Fair as part of the Académie Horlogère des Créateurs Indépendants (AHCI) and is an applicant for membership of this prestigious academy.

Eva has now joined the rarefied ranks of independent watchmakers and her exclusive company specialises in the manufacture of unique handmade watches and the development of new and unusual mechanisms. She will shortly give birth to her second child and perhaps we may then hear what will be the name of the second series of Eva Leube watches. The “Ari” watch is priced at €76,000 in gold and €93,000 in platinum.

Ariel Adams (aBlogtoRead.com) makes the very astute comment that “If you haven’t yet realised it, the allure of independent watchmakers is the watchmaker themselves. If the same watches came from large established brands they would not have the same effect. Some of the watches might actually sell better if they came from the larger brands, but they would not be as memorable and our emotional connection to them would not be as great. The allure of the little guy (or girl) is as much in their personality as it is in their craft.”

This perceptive comment says much about the makers of individually conceived watches such as those of Eva Leube.

Like James Oatley she will certainly make an enduring mark in the Australian horological profession and she is the more especially welcome as she chose to come to Sydney of her own accord.