430 million Swiss francs for the new building by star architects Herzog & de Meuron, 1,000 new stands constructed by 20,000 people, 3,500 accredited journalists, of which 500 were Chinese! More BabelWorld than ever, BaselWorld this year reached new heights in luxury and power. But while the exhibition surface increased, reaching 141,000m2, of which 83,000m2 allowed the construction of stands several storeys high, the number of exhibitors reduced, from 1,892 in 2012 to 1,450 this year. “We prefer quality over quantity”, explained Jacques Duchêne, the irremovable president of the exhibitors’ committee, adding that since 1999, when Hall 1 first opened, “everything has changed: mentalities, products, communication, not to mention the concentration and consolidation” which have radically transformed the watchmaking sector (and the jewellery sector, but to a lesser extent) over the past 15 years. Four of us – Pierre Maillard, Paul O’Neil, Malcolm Lakin, Keith Strandberg – will try here to summarise the most important things that were shown and said (or not said) there, to draw some conclusions and give a general stock-take covering most aspects of the world watchmaking industry. (It’s an impossible task to cover everything so we apologise to those who are not mentioned—your time will come).

Seen from the outside, the new architectural cloak of BaselWorld, with its shape reminiscent of a long metallic ship with two bridges, is quite a loyal reflection of a certain arrogance within the industry. Beyond its intrinsic shape and the architectural accomplishment, with a spectacular light well of tens of metres in the part of the building that seems to have been thrown like a bridge across the main exhibition square and its tram interchange, the new building cuts off, without any consideration for urban planning, the long perspective along an avenue that used to terminate in the very pure, very geometrical “highest tower in Switzerland”, which now looks like it is truncated. It is as if, symbolically at least, the watchmaking industry is “above ground”, above all else and doing as it pleases (the building also hosts the famous ArtBasel exhibition and we could say the same of the world of modern art).

But it is only once you enter this horizontally suspended metallic temple that you see the real size – or excess – of the luxury that the watchmaking industry likes to show off. Each brand present took the opportunity to invest heavily in its own image. We therefore pass by the foot of the stands reading their architecture as a series of vibrant statements. The majority of brands tried to give above all an impression of strength, solidity, power and richness. With this as their brief, the majority of architects, irrespective of their formal differences, logically opted for solid and luxurious cubes, often enclosed, with material indications of the brand on the outside: logos, iconic emblems such as Bulgari’s Serpenti, which was used as the structure for the entire façade, luxury materials, screens in abundance, giant photos. But paradoxically it was the lightest and most open structures that were the most noticed, from the poetic jungle of watch movements falling like rain inside the Citizen stand, the immaculate and vibrant ball of light at Swarovski, the total and modernist transparency of the newcomer Shinola or, evidently, the emblematic wooden “cabin” designed by Toyo Ito for Hermès.

Hermès, “it’s the essence that counts”

By proposing a semi-open space in the shape of a wave, which was light, seemingly fragile and looked as if it was temporary rather than put there for eternity, the recent recipient of the 2013 Pritzker Prize (the “Nobel prize” for architecture) gave Hermès an image that set the brand totally apart. For Pierre-Alexis Dumas, creative director at Hermès and son of the late Jean-Louis Dumas, “this pavilion corresponds with the particular philosophy of Hermès: it is not appearances that count but the essence. Far from being just another sales machine, it is a house to be shared, a place to chat in transparency and calm. The aesthetic of violence and aggressivity is not Hermès.” Not to be outdone, Toyo Ito says from the outset that he “looked for a form of humanity that was at odds with our times, which are focussed completely on business and profit.”Sitting in one of the meeting rooms in the “cabin”, bathed in soft light and with acoustics that allow a hushed conversation (something that is not always easy at “BabelWorld”), glimpsing the throngs of visitors passing by through the mesh of wood and green plants surrounding the entire structure, you feel a welcome sense of well-being. It’s a feeling similar to that which, no doubt, the wearer of an Arceau Le Temps suspendu watch feels when he stops the hands of his watch turning. Because it is also this great coherence between the Hermès pavilion and the brand’s products that justify the authenticity of this architectural direction. The same word keeps cropping up, from Pierre-Alexis Dumas and Toyo Ito alike: the word “dialogue”. Just as the Arceau Le temps suspendu creates a dialogue between the watch and its wearer, the pavilion’s architecture is the fruit of a profound dialogue between the architect and his sponsor, a dialogue that went into great detail. “Dialogue is at the heart of everything we do,” explains Pierre-Alexis Dumas. “The same is true for what we call design. Design is not the creation of a demiurge; it’s a process of joint reflexion led by exchange.”A tautology? Yes and no. Because given the number of products presented at BaselWorld, we sometimes get the impression that this necessary dialogue has not always been taken to its conclusion between the different partners on a common adventure. Whether we like it or not, watchmaking remains a collective art. 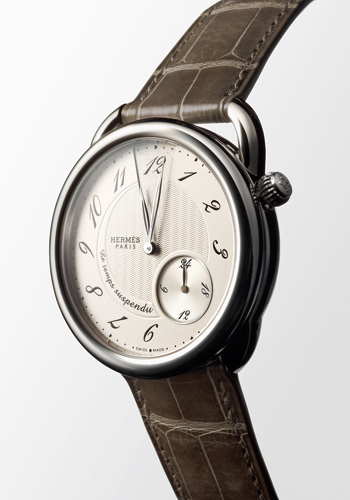 ARCEAU LE TEMPS SUSPENDU by Hermès
The new Arceau Le temps suspendu 38 mm in steel, aimed at ladies, was not easy to produce. Given its smaller size, it was not possible to include the retrograde date from the original 43mm version. The base used here is the Vaucher H1912 movement, to which a retrograde module has been added, allowing the display of the hours and minutes to be “suspended” and returned to on demand. But there was still the problem of the seconds hand. What can we do with it, the conceptors asked themselves. The solution: the seconds have been transformed into an operating indicator (which shows that the movement continues to function even when the hands remain fixed) that moves backwards, so that it cannot be confused with a small seconds display and makes one revolution in 24 seconds. An ingenious and poetic invention.

THE WATCH FILE Baselworld as we knew it is over. Its main pillars have collapsed. Patek Philippe, Rolex, Tudor, Chopard and Chanel leave Basel and join Geneva, the FHH (...)