Manœuvres are continuing and intensifying as far as production is concerned. Far from offshoring, as many other industries do, the Swiss watch industry is on the contrary developing new production centres on its own soil. Three recent developments are good examples of this trend: TAG Heuer has opened a new “Avant-Garde Manufacture” for production of its in-house chronographs; Omega now has another dedicated co-axial assembly line for its chronograph calibre; and Vacheron Constantin has inaugurated a new site for producing and decorating components for mechanical movements.

Manœuvres are continuing and intensifying as far as production is concerned. Far from offshoring, as many other industries do, the Swiss watch industry is on the contrary developing new production centres on its own soil. Three recent developments are good examples of this trend: TAG Heuer has opened a new “Avant-Garde Manufacture” for production of its in-house chronographs; Omega now has another dedicated co-axial assembly line for its chronograph calibre; and Vacheron Constantin has inaugurated a new site for producing and decorating components for mechanical movements.

The first phase of the ambitious project to reshape the site of the headquarters of Omega is already under way, with the former Swatch headquarters demolished and ready to make way for the future Omega manufacture next to the company’s existing head office, which is a listed building. Until this ambitious new project is completed in the summer of 2015, however, some 500,000 Omega co-axial movements are produced for the brand on assembly lines at various facilities of the Swatch Group’s ETA division. Europa Star had the opportunity to visit the dedicated assembly line for the most recent of these co-axial movements, the Calibre 9300 co-axial chronograph at one of ETA’s six factories in its home town of Grenchen, a 15-minute drive from the Omega headquarters in Biel. 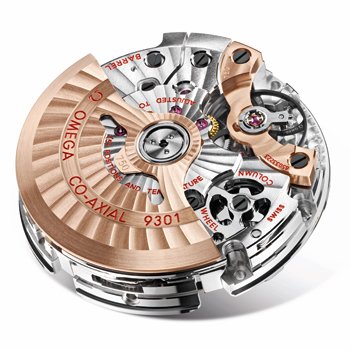 Here, the movement blanks are produced in the basement and their jewels set in the same building before they arrive in the clean room that is the assembly line proper, where 124 of the 337 components are assembled on them, mostly by hand. The “line” itself is a model of lean manufacturing and a far cry from the more familiar scenes of rows of watchmakers working alongside each other.

The movement blanks are loaded into special transport trays, each with its own identification chip, that automatically route the movement blank to a free workstation for the relevant assembly stage to be carried out. A myriad of traffic lights in red, green and blue show the operators at a glance where work needs to be done and where there are bottlenecks. 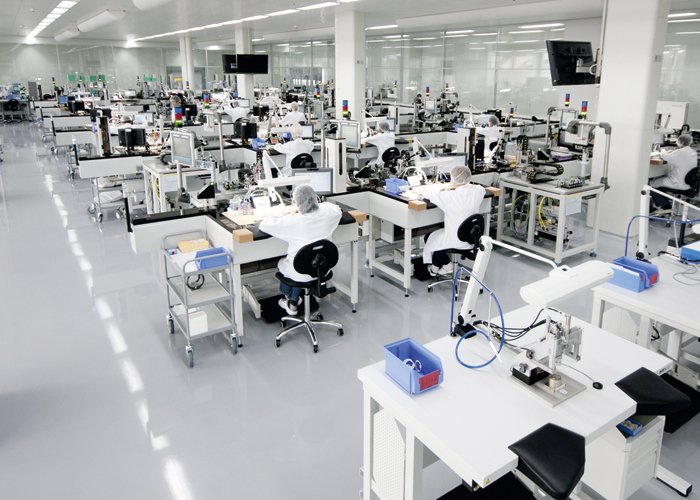 The assembly line for the Calibre 9300 in a separate clean room at ETA.

(WO)MAN AND MACHINE - THE DIVISION OF LABOUR

Each time a bridge is added to an assembly, a single screw is inserted manually, using a torque-sensing screwdriver, purely to secure the movement during its transport. The remaining screws are then selected and screwed in automatically by a special robot.

Together with the lubrication and testing of the movements, this is the only operation that is carried out fully automatically on the assembly line. The main manual operations are the assembly of the chronograph bridge and the assortment, which consists of a silicon balance spring and co-axial escapement that are supplied pre-assembled by Nivarox. Each of these phases is followed by a test: the clearance of the balance is tested by machine in two positions (0° and 45°) and the chronograph functions of start, stop and reset are also checked. Because of the particularity of the co-axial escapement, the penetration of the pallet on the escape wheel is also checked under the microscope, using a special support to stop the movement and move the teeth of the escape wheel very slowly by turning the rim of the balance wheel by hand.

At the end of the assembly line, the working dial for the COSC test is fitted and the height of the hands checked before the movement is cleared for rating and then sent off for COSC certification without its oscillating mass. Only once the movement returns with its COSC certificate is the oscillating mass added and the finishing touch applied: That distinctive red colour on all the text and number inscriptions is applied by hand using a pedal-operated syringe filled with red paint. But since the ultra-fine needle of the syringe cannot touch the metal for fear of scratching, the paint has to be “dropped” into the recesses from just the right height. Strangely, this delicate operation is the only one carried out in splendid isolation outside the confines of the clean room. Nevertheless, the attention to detail given to this operation alone, and the visible trace it leaves, is symbolic of that which goes into the entire production of Omega’s Calibre 9300.

TOWARDS A CO-AXIAL QUALITY CERTIFICATE

The principal benefit of the co-axial escapement is the reduction in friction from the contact between the ruby pallets and the escape wheel, which is both shorter than in the Swiss lever escapement and takes place at a lower angle of incidence. This means that the escapement is less dependent on lubrication and therefore less affected by the ageing of lubricants, which ensures better isochronism over a longer period. It has only been possible to prove this, of course, after several years of experience with the brand’s first “in-house” co-axial calibres, which have been developed from scratch around the co-axial escapement.

“The aim is for all co-axial movements to have our 15,000 Gauss anti-magnetic technology within three to five years.” Stephen Urquhart, President, Omega.

Ever since it launched the first co-axial calibre in 1999, Omega has been keen to extol the virtues of the co-axial escapement. Better isochronism and longer service intervals remain difficult to prove, however, given that the co-axial calibres are “merely” certified as chronometers along with a million other timepieces each year. Omega lay down the gauntlet by introducing a four-year warranty for its co-axial watches, at a stroke doubling the term of the warranties offered by most of its competitors. More recently, the brand’s award-winning 2013 advertising campaign, which is based around the precision mechanics of the co-axial movement, goes as far as to claim that it is “the most perfect mechanical watch movement in the world.”

With turnover estimated to be in excess of two billion Swiss francs per year, Omega’s initial gamble on co-axial technology has clearly paid off. Although Omega’s president Stephen Urquhart has dismissed the idea of setting up Omega’s own quality standard as proof of the co-axial escapement’s superiority, on the day of our visit he did reveal that “the aim is for all co-axial movements to have our 15,000 Gauss anti-magnetic technology within three to five years. We are working with an independent institution towards officially certifying that it is better in terms of chronometry and anti-magnetism.”