PRE-BASEL - PILO & CO, the journey of an independent brand


PRE-BASEL - PILO & CO, the journey of an independent brand

Media coverage of the watchmaking industry is overwhelmingly dominated by the big global luxury brands on the one hand and the independent brands of über mechanical watchmaking on the other. It is these two poles (whose respective economic clout is nevertheless completely different) that provide the image of the Swiss watchmaking industry. Far from the media spotlight, there is however an entire sector of the industry – let’s call it the “mid range” or simply “affordable” – that gets hardly any opportunity for press coverage.

The mid-range sector is suffering, caught between the hammer of the big brands, whose might has multiplied over the past decade, and the anvil of markets and distribution, which have increasingly been locked up. Pilo is one such small independent brand in the mid-range segment. In order to understand better how these “affordable” brands manage to survive in the current climate, Europa Star met up with the brand’s founder, Amarildo Pilo.

THE BEGINNINGS After almost ten years of experience as a distributor (from 1991 to 2000 at Dalinter SA, in Geneva, which at the time distributed brands such as Raymond Weil, Doxa, Favre Leuba, Baume & Mercier and Revue Thommen mainly in the eastern European markets, in particular Poland (with 400 stores)), Amarildo Pilo set up on his own account and opened his first store in Geneva, from where he managed the Swiss distribution for a handful of mid-range brands. At the same time, he set up his own watch brand, under the name Pilo & Co. 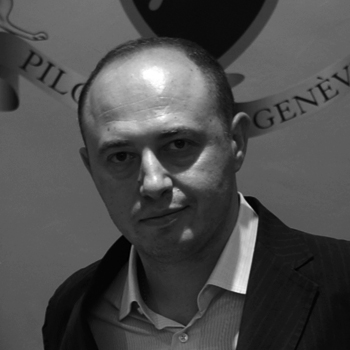 His first collection was entirely mechanical (as a reminder, we are talking about the year 2001 when mechanical watches were not as predominant as they are today). It consisted of small, elegant watches with a diameter of 39mm and a very classic design, in steel or PVD, with an opening in the dial to allow a glimpse of the balance in the manually wound movement – a novel idea at the time. The movement was a simple and reliable three-hand calibre that was made in Asia. At an unbeatable price of 200 Swiss francs, he sold 4,000 in Switzerland in one year. The brand was born. But access to international markets proved to be very complicated.

REMAIN AFFORDABLE Today, over 12 years after it was established, Pilo & Co offers 11 different collections, which now cover a variety of styles and, little by little, have acquired their own particular “style” in which colour often plays an important role – which no doubt explains why women account for 65 per cent of sales. Although the prices for the range remain affordable (the 180 references go from 360 Swiss francs for a sumptuous small quartz ladies’ watch up to 2,860 Swiss francs for an “exceptional piece”, an annual calendar based on the self-winding ETA 2832 calibre, excluding the gem-set models that can reach 11,000 Swiss francs), the gradual move up range became inevitable, primarily because of “the vital need to have the Swiss Made label on international markets,” as Amarildo Pilo explains.

Pilo & Co’s flagship collection is the Tempo. With a very classic look, it consists of self-winding mechanical watches (ETA 2846, ETA 2824) with a diameter of 43mm, in steel or PVD, fitted with a screw-in case back, a screw-in crown and a sapphire crystal. The tonneau-shaped Tempo models have a large opening at 12 o’clock – a distinctive design code of the brand – that shows off the partially engraved movement (or fully skeletonised in the case of the round Tempo models). The average price of this collection: a surprising 1,170 Swiss francs.

But the best-selling collection and the one which Amarildo Pilo says “best encapsulates the spirit of the brand” is the Doppio Orario collection. This highly original line displays two different times, “My Time” and “His Time” (or “Her Time” depending on whether it is a gents’ or ladies’ model), which are shown on two separate dials applied to a coloured mother-of-pearl base. The two times are provided by two Ronda quartz movements, one of which has been modified to display the seconds common to both movements, which are encased side-by-side in a kind of cage. This original watch sells for the very competitive price of 630 Swiss francs.

THE INTERPLAY OF COLOURS AND SHAPES Among all the other collections, the main stylistic features of which are the range of colours available – in a palette ranging from dark greens to blues, reds, orange and smoked tones, the variety of shapes – different sizes of tonneau shapes, rectangle or rounded squares, cambered shapes and facetted crystals, and the “vintage” touches to the dials, we would like to highlight the tonneau-cushion shaped Invidia collection, with a very retro look and a guilloché dial (from 420 to 5,600 Swiss francs for a version with a bezel set with almost three carats of blue or pink sapphires), the Illusione collection, which offers pretty quartz chronographs for ladies with mother-of-pearl dials available in five colours (630 Swiss francs) and the original gents’ chronograph collection, whose imposing tonneau case sports a very thick bevelled crystal that is almost one centimetre thick on the sides and gives a diffracted look to the vibrant colours on the dial (790 Swiss francs with a Ronda movement).

The provocatively named Corleone collection, which was launched in 2012 (and takes its name from a village in Sicily and the Godfather played by Marlon Brando in the eponymous film), consists of bold watches in black or pink PVD equipped with the ETA 2846 self-winding calibre (1460 Swiss francs).

FRANCHISE AND STORES Nevertheless, despite this diversity, this originality and this competitive price policy, distribution has, over the years, become a major stumbling block for all “median” brands. The greatest achievement of Pilo & Co., which sells around 8,000 watches per year, is to have opened forty points of sale in Switzerland, which is one of the most competitive markets in the world. Beyond this, Pilo & Co. is present in China (with nine franchises), Japan, Vietnam, in the Middle East and, more recently, in Turkey. In addition to this traditional distribution model, Pilo & Co. has also done something that you would think is reserved solely for big brands: invest in its own stores. It is thanks to the brand’s experience in Geneva, where Pilo & Co. has had two stores in its own name for a number of years (one of which is in the heart of the Saint-Gervais quarter, the historical home of Geneva’s cabinotiers), that it has recently opened two of its own stores in Italy, strategically located in less important tourist towns that are more affordable for a mid-range brand. This is a strategy that Amarildo Pilo aims to develop in further in 2014 – a year that could therefore be decisive for the brand. 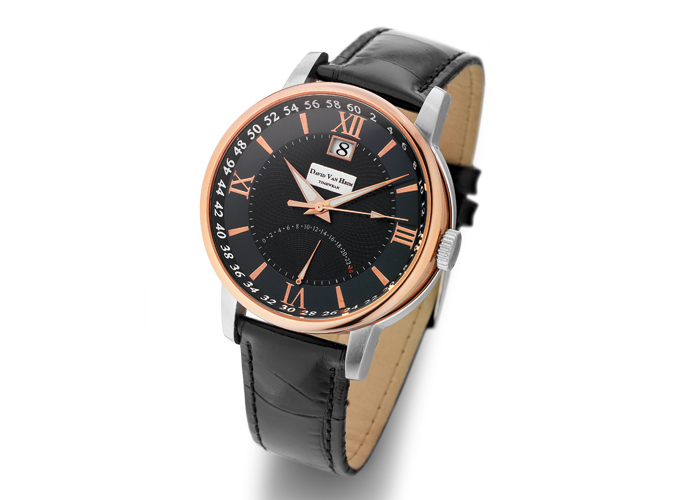 Alongside Pilo & Co, Amarildo Pilo has set up a second brand, under the name David Van Heim. As its name suggests, the watches are designed in Geneva but made in the Netherlands. The product range is mainly mid-range but very technical watches. For example the Etika collection, which has an original construction: the watch consists of a case back with lugs on to which the case proper is inserted. The case can be round, tonneau-shaped or square. You can see the David Van Heim collection at BaselWorld, where the brand will be presenting a number of new products.