If 2013 was in many respects the “year of the métiers d’art”, the SIHH 2014 placed the coming year under the auspices of astronomy. What could be more natural, after all, as an exhibition entitled “Horology, a child of astronomy”, presented by the Fondation de la Haute Horlogerie and curated by the historians Dominique Fléchon and Grégory Gardinetti reminds us. 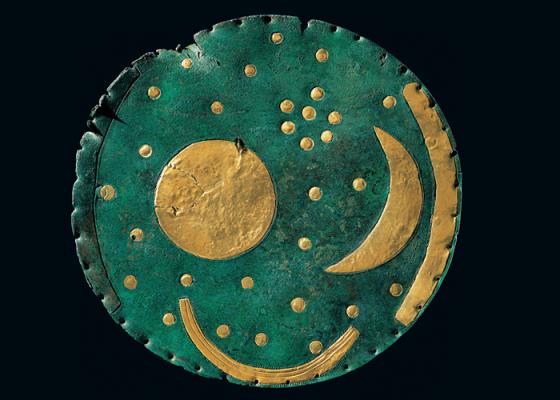 Here, we could discover with great emotion the famous Nebra disc, from around 1600 BC, which depicts 32 heavenly bodies in gold leaf on a bronze disc 32 centimetres in diameter, including the crescents of the sun and the moon as well as the constellation Pleiades. A work of art, of religious observance, a tool (according to some researchers it allows certain astronomical calculations to be made, in particular the prediction of the summer and winter solstices)… it effuses beauty, mystery and magic.

A mere stone’s throw from the exhibition we found the piece that was without doubt one of the most remarkable and most talked about at this year’s SIHH: the Midnight Planentarium Poetic Complication by Van Cleef & Arpels. As far as we know, this is the first time that a planetarium in relief has been reduced to the size of a wristwatch. From a technical point of view, the movement was produced in collaboration with the watchmaker Christiaan van der Klaauw, a specialist for over 40 years in watches with astronomical indications. We don’t need to explain the complicated calculations required to convert the orbits of the different planets into the subtle interplay between the gear trains of a watch (the additional module alone that drives this complication has 396 components).

Because each of the six planets that are featured on this watch move in line with the genuine time it takes them to move around the fixed central sun in red gold. Saturn therefore takes over 29 years to make a full revolution on the dial, Jupiter close to 12 years, Mars 687 days, Earth 365 days, Venus 224 days and Mercury 88 days. Each of these planets is a sphere of hard stone that has been cut by hand – turquoise for Earth, serpentine for Mercury, chloromelanite for Venus, red jasper for Mars, blue agate for Jupiter, sugilite for Saturn – whose dimensions are in proportion to the mass of the planets. Each planet is attached to the end of a small stem that revolves around one of seven aventurine discs that make up the magnificent dial of this wrist planetarium. An eighth aventurine disc, embossed with a 24-hour scale and the months of the year, completes the dial. The time is read only approximately (to the nearest 10 minutes or quarter of an hour) off a shooting-star hand in pink gold that makes one revolution of the dial in 24 hours. Since the cosmic machinations are both a science and a symbolic reflection of our own destiny, the rotating bezel allows the wearer to choose their “lucky date” by positioning a red triangle alongside the graduated calendar. On this chosen date, the Earth appears under a star engraved on the sapphire crystal.

Powered by a self-winding movement with an annual calendar, this superb piece takes pride of place at the centre of the Van Cleef & Arpels Poetic Astronomy™ collection, whose ambition, as Nicolas Bos, Chairman and CEO of the brand, reminds us, is “to invite people to dream” (but it is a costly dream at close to 150,000 euros). 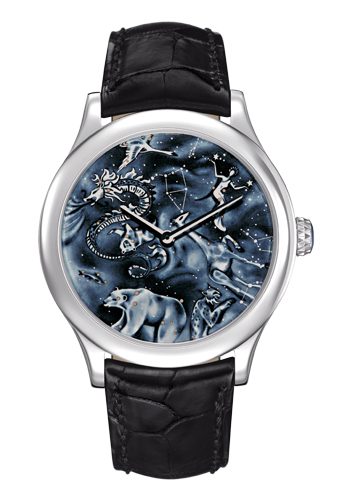 But Van Cleef & Arpels does not stop there: with the same astronomical inspiration the brand presents two new Extraordinary Dials, the Midnight Nuit Boréale and the Midnight Nuit Australe. Two fine chiaroscuro interpretations in grisaille enamel with tiny drops of yellow gold. Yet another reason to dream.

Greubel Forsey proposes a much more scientific approach to astronomy – or rather astronomical calculations – with a quite astonishing piece: the QP à Equation. This watch signals the start of a second phase in the duo’s work on “fundamental inventions” in watchmaking. After tackling inclined tourbillons with their characteristic rigour, they now revisit the perpetual calendar with the aim of making it as easy to read as possible. But to achieve this “simplicity” – the perpetual calendar indications are arranged side by side in three windows showing the day, big date and month – they had to start by making things more complex.

Looking back to the very origins of the perpetual calendar, the medieval “computus” that was used to determine the dates of religious festivals, they developed a genuine mechanical computer that allowed them to incorporate the equation of time within the perpetual calendar mechanism (it is not, therefore, an additional module but a fully integrated movement consisting of 570 components). At the heart of this mechanism is a “coding wheel” (three patents) that consists of a stack of cams with fingers that coordinate the displays on both sides of the watch: the month disc displays the month in the window on the dial but at the same time moves the equation of time scale on the back of the watch. The year disc actions the leap-year indicator on the dial and the season indicator on the back. 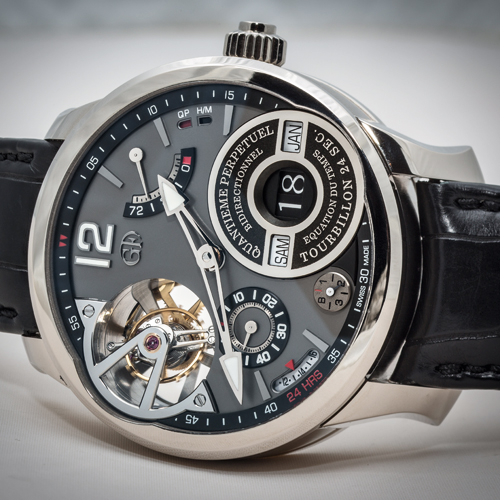 It is on the back of the watch that we find the equation of time, which shows the continuously changing difference between mean solar time (one day = 24 hours) and true solar time. This difference, which is due to the elliptical trajectory of the Earth’s orbit around the sun, and which can vary from a few seconds up to more than 16 minutes, is displayed graphically on a sapphire disc by a “manta ray” shape with lines cut into four sections, two red and two blue. The red line indicates a positive difference between mean solar time and true solar time, the blue line a negative difference. A second sapphire disc, linked to the month wheel, has a scale graduated in minutes. The intersection between this scale in minutes and the red or blue lines on the other disc shows the equation of time at a glance. This new presentation of the equation of time apparently also has some educational value because, according to the watchmakers, when reading graphically “you understand better the Earth’s elliptical orbit around the sun and the arrival of the equinoxes and solstices”.

QP à Equation by Greubel Forsey and the equation of time

This technical and astronomical piece is 43.5mm in diameter and 16mm thick and driven by a movement with a 24-second tourbillon inclined at 25° and a large, variable-inertia balance beating at 21,600 vibrations per hour. This is powered by two co-axial, fast-rotating barrels with a slipping spring to avoid excess tension, which give a power reserve of 74 hours. It is also a work of art. It bears the excellence of finish pushed to the extreme that is characteristic of all Greubel Forsey timepieces. A rare piece with a genuinely astronomical price of 670,000 euros.

The same graphical evidence at A. LANGE & SOHNE

Astronomy certainly has an important virtue: in order to represent in the most precise and clear way the complex planetary, solar, lunar and stellar movements and interactions you need to be able to think as much like a mathematician as a mechanical engineer or even a graphic designer or a poet. A. Lange & Söhne demonstrates this with brio with its new Richard Lange Perpetual Calendar “Terraluna”. On the dial side, this perpetual calendar with big date has a regulator display that is harmoniously divided into a large minute circle that is intersected by the seconds circle on the left-hand side of the dial and the hour circle on the right. The day and the month appear in two separate windows, at 8.30 and 3.30 and the leap year can be seen in a small circular window at 2.30. The power reserve (an exceptional 14 days) is displayed in a blade-shaped window at 6 o’clock. 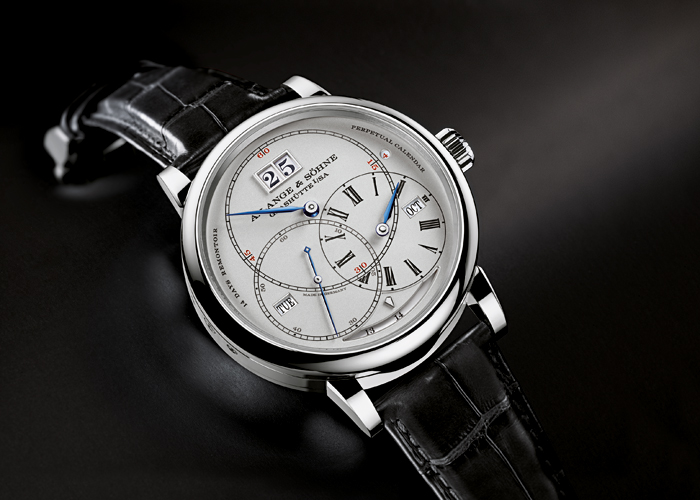 Graphically, these harmoniously arranged indications allow easy and structured reading of the different time and date information. But it is on the back of this magnificent perpetual calendar that we discover the “Terraluna” that lends its name to this timepiece. This patent-pending orbital display of the moon phases presents, “for the first time on a wristwatch”, the position of the moon with respect to the Earth and the sun. The sun is represented by the balance, which is located on the same axis as the Earth, which itself is represented by a disc that completes one revolution in 24 hours, which is at the centre of a larger disc that features a thousand stars. The moon appears in a round aperture in this stellar disc and rotates anti-clockwise around the Earth in exactly 29 days, 12 hours, 44 minutes and 3 seconds. This ultra-precise mechanism would only need correcting after 1,058 years if the watch functions continuously. One of the great things about this display is that you understand intuitively and immediately the position of the moon in relation to the Earth and the sun-balance, and thus its appearance: the new moon, which is invisible when it is aligned with the Earth-sun axis, then waxing as it progressively moves away from this axis, full moon when it is on the opposite side to the sun and finally waning when it gradually returns to the axis of the sun. 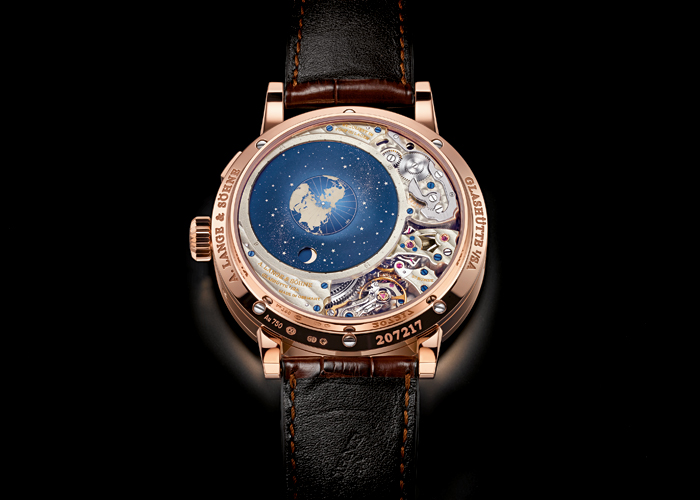 The beautiful Calibre L096.1 hand-wound movement that powers this celestial machinery with a double barrel is equipped with a constant force mechanism that transmits an invariable torque to the balance throughout the 14 days of power reserve. You will need to set aside 185,000 euros for this very beautiful piece with a pink or white-gold 45.5mm case.

CARTIER the moon on demand

The same Earth and moon vocabulary is found in the new Rotonde de Cartier Earth and Moon, but the principle behind the moonphase display is totally different. Aesthetically, where A. Lange & Söhne opts for hyper-precision in its indications and an astronomical pedagogy, Cartier chooses a more baroque and playful interpretation. The main innovation in this watch is that the moon phase indication is produced on demand. You press the pusher at 4 o’clock and a circular cover in lapis lazuli in the same position moves over the tourbillon at 6 o’clock to cover the cage, creating a crescent that reflects the “exact” position of the moon in the sky.

Above this is a stylised terrestrial globe (hence the name of the watch) with the hour and minute hands at its centre. A disc bearing the 24 hours of a second time zone revolves around this globe. Driven by the calibre 9440 MC hand-wound movement, whose semi-skeletonised finish creates a lattice of stars on the back of the watch, the Rotonde de Cartier Earth and Moon has a power reserve of around three days and is available as a limited edition of 50 pieces.