In a mere two days after the official programme of the SIHH had finished I was able to marvel at the range of creativity that continues to pervade the watch industry at all levels beyond the confines of Geneva’s Palexpo exhibition centre, from some of the craziest “innovations” to the very pinnacle of the traditional art of watchmaking. My horological journey spirited me from Switzerland’s watchmaking valleys to its alps, then on to an Icelandic volcano, a Caribbean island and a British motor racing circuit – all for the price of a day ticket on Geneva’s public transport system.

One of the biggest surprises I saw this year was from a brand tucked away discreetly in a small conference room in the Starling Hotel, just behind the hive of activity that was the Palexpo in Geneva. Like all the traditional watch brands, it is named after a renowned watchmaker, James C. Pellaton, a specialist in tourbillons who had supplied movements to the big names in the industry, such as Patek Philippe, Ulysse Nardin and Girard-Perregaux.

Michel Dawalibi, a relation of Pellaton on his wife’s side, realised his dream of paying tribute to the legacy of this master watchmaker when he revived the name in 2009, launching a first collection of highly limited production. “The watches are either unique pieces or very limited series of four to twelve pieces,” he explains. “We deal directly with customers and collectors, or sometimes with intermediaries who are looking for something different, but we have no representation in stores.” This is understandable, given that the customer can personalise the case and movement of their watch to suit their own tastes, although it means that a watch can take over a year to complete, with four to five months spent on the skeletonisation of the movement alone. The stunning results are seen in the two singular pieces offered by the brand: a 65mm pocket marine chronometer with tourbillon and a 44mm “Royal Marine” wrist chronometer. Both these pieces have movements with a distinctive architecture with bridges that sweep elegantly around the tourbillon at 6 o’clock and have a sober sand-blasted finish with hand-bevelled edges. The time is indicated by gold hands against Roman numerals that have been metallised on to the sapphire crystal in three layers: a red-gold base, followed by white gold and finally the blue layer visible on the dial side.

The marine chronometer pocket watch is equipped with the JCP 1895 MD calibre, which at 53mm in diameter is one of the largest tourbillon calibres on the market and offers seven days of power reserve. It is available as a limited edition of 12 pieces with four each in yellow, red or white gold and comes with an elegant case with gimbals for use as a marine chronometer. The Royal Marine model, which is fitted with the manually-wound JCP 1898 MD calibre, offers 72 hours of power reserve with a power reserve indicator on the dial and a retrograde date between 8 o’clock and 2 o’clock. It is available in a slightly more generous limited edition of 36, with 12 pieces each in the noble materials of red gold, white gold and platinum.

AND HIGH-END INNOVATION If measured by complexity alone, the Amadeo® Fleurier Tourbillon Virtuoso III is undoubtedly the highlight among the eight new models presented by Bovet at the start of the year. The most important aspect of the design remit for this new perpetual calendar piece was that the tourbillon cage should remain clearly visible at all times. The day and month indications are therefore accommodated on either side of a central dial, inscribed in black or white (depending on the model) on sapphire discs that are read against a contrasting white or black background instead of the usual window, which ensures that as much of the magnificent movement (656 components, five days power reserve) as possible is visible. 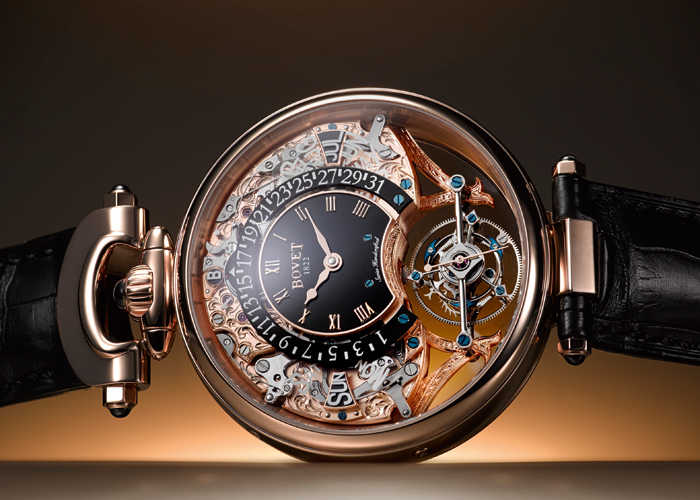 To power the retrograde date around the dial, which must operate within quite a small arc on an already small dial, the watchmakers at the brand’s Dimier 1738 workshops even developed a millimetric rack that has been registered as an international patent. The new movement follows the highly domed contours of the sapphire crystal, with the result that the dial of the timepiece is actually at a higher level than the bezel, which offers a much better view of the movement’s decoration. 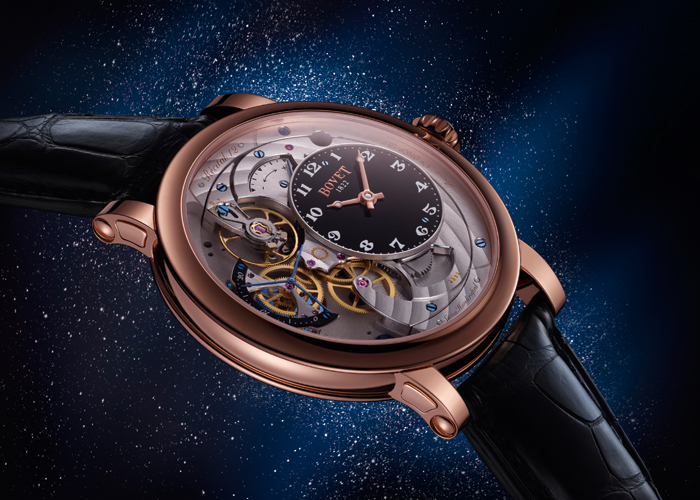 Bovet’s most important launch of the year, however, was presented discreetly with the Recital 12 model, inside which beats a new manual-winding movement that has taken eight years to develop. It is the brand’s first non-tourbillon calibre and forms the basis for a strategy that will see it fitted with integrated complications over the coming years, which can easily be powered thanks to a seven-day power reserve coming from just one mainspring barrel.

Self-styled “Anglo-Swiss” brand Graham likes to emphasise its British heritage, which it claims from a loose connection with renowned British watchmaker George Graham (1673-1751). Although the Swiss-registered company itself dates back only to 1995, Graham remains true to its roots with a faithful adherence to British style. 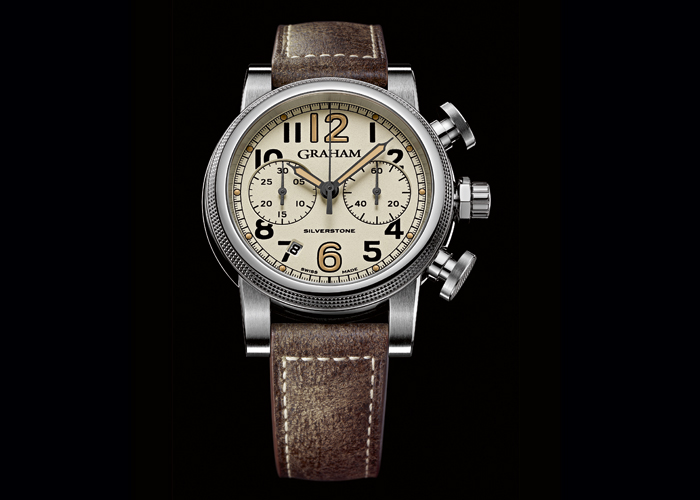 This is exemplified in the brand’s Silverstone collection, which runs the gamut of different epochs in motor racing, from the vintage to the high-tech world of today. The Silverstone Vintage 44, for example, recalls the era of the gentleman driver, when racing was a social activity and the taking part was more important than winning. Ivory and brown dials, a knurled bezel and leather straps with an authentic-looking patina evoke the vintage spirit, while Graham’s G1702 calibre self-winding chronograph movement keeps the watch running. 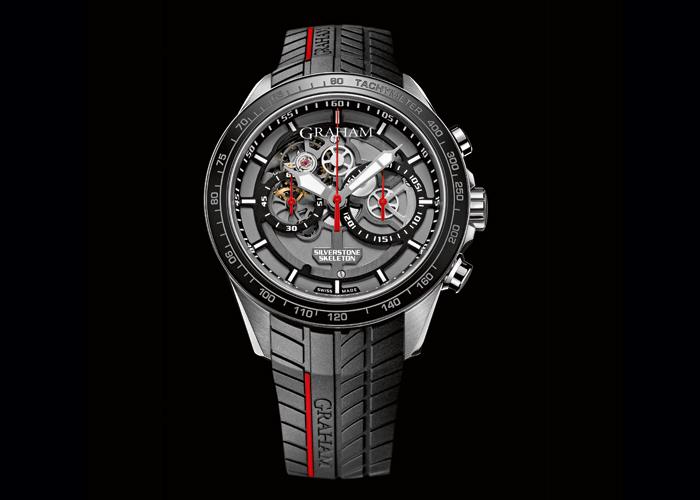 Disregarding the fact that the “RS” in Graham’s limited-edition Silverstone RS Skeleton collection derives paradoxically from the German “Rennsport”, the watches do an admirable job of embodying the modern motor racing spirit, with its high-tech materials and sleek silhouettes. Its 46mm stainless-steel case is crowned with a black ceramic bezel with tachymeter scale, underneath which a coloured, knurled aluminium ring in red, green or blue adds an accent of colour that continues along the grooved rubber strap and is also used for the chronograph hands. Only 250 models are available in each colour, powered by the G1790 skeletonised self-winding chronograph movement.

MANIPULATING A WATCH’S DNA With its “DNA” models, Romain Jerome has made a name for itself by incorporating a physical trace of objects that are significant either from a historical or contemporary point of view, from moon dust to bits of the Statue of Liberty, the Titanic, the iconic yet ill-fated DeLorean motor car and fallout from the Eyjafjallajökull volcano in Iceland. Other collections pay tribute to cultural icons such as the Space Invaders® watches and, more recently, a tribute to tattoo artists produced as a collaboration with renowned London tattoo artist Mo Coppoletta.

It is therefore refreshing to see that the latest models presented by the brand have a wonderfully understated design that nevertheless manages to show off unusual materials. On the four new 1969 “Heavy Metal” models, the eye is allowed to marvel at the random structure of the crystals of silicon that make up the dial. Three models with a blue, brown or silver PVD coating to the silicon are all the more surprising when seen next to a model with a dial made out of meteorite, the structure of which is uncannily similar to that of the silicon. The absence of a date or any other figures, as well as the discreet chapter ring and small seconds counter at 9 o’clock, ensure the minimum of distraction from the fascinating glint of these unusual dials.

The people at “hydromechanical horologists” HYT, headed up by the irrepressible Vincent Perriard, have also been experimenting with manipulating the DNA of their timepieces. Mr Perriard spoke candidly to Europa Star about problems with the brand’s pioneering liquid display technology. Since the system works on the basis of pressure pushing two immiscible liquids around the hour ring, some variations in temperature had caused problems. This has now been solved with a thermal compensator in the movement and the brand offers a retrofit to any watches already sold.

Since this problem was solved, the brand has ramped up production to 50 watches per month since September 2013 and aims to sell 600 watches in 2014, which will be its first full year of operation. Aside from developing new colours of liquids for use in the H2 model, which has been developed together with APRP, the brand has also been working on new prototypes for its cases that incorporate unusual materials. After infusing polyexpoxide with sand from Saint-Barthélemy in the Caribbean, the boffins at HYT have experimented with materials as diverse as cactus needles, grass and even champagne. Expect more weird and wonderful additions to the collection of 19 references this year, but you will have to wait another couple of years for the first models with luminescent liquid, which are slated for 2016.

MOUNTAINS ARE GOOD FOR YOU! Young luxury watch brand Breva wants to encourage us to take to the mountains (preferably wearing one of their timepieces) to enjoy the positive health effects of the greater concentration of negative ions in mountain air. After presenting its first timepiece, the Genie 01 last year, the logically named successor model, the Genie 02, was launched during this year’s Geneva show week. 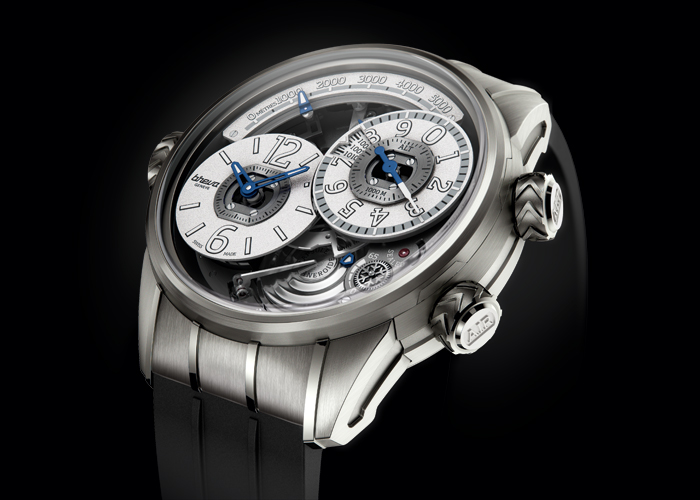 Genie 02 by Breva
44.7mm case in grade 5 titanium, dials in grained and galvanically-treated nickel silver with three-dimensional SuperLuminova numerals and hour markers, altitude scales in metric or imperial measurements. Air enters the movement through a moisture-resistant Teflon osmosis membrane and the air pressure is converted into altitude read-outs by two aneroid capsules. Powered by Breva’s proprietary movement with 65 hours of power reserve.

The 44.7mm brushed grade 5 titanium case of this limited edition of 55 frames a dial that is not dissimilar to the first Genie 01. But while both feature an altimeter display around the upper edge of the dial, the Genie 02 swaps the weather forecasting subdial of its predecessor for a precision altimeter dial with an aperture that displays the barometric pressure. Although the principles for operating both displays are similar, the aneroid capsules used in the new Genie 02 were developed specifically for displaying altitude, rather than barometric pressure, and are different to those used in the first model. A case-back engraved with the world’s famous ski resorts and their altitudes show who this watch is really aimed at. Timekeeping is provided by Breva’s proprietary movement, developed by Jean-François Mojon of Chronode, which offers 65 hours of power reserve.

BACK DOWN TO EARTH If all the masterpieces and technological innovations of the high-end, not to mention your virtual trip to the mountains with Breva, have left you with your head in the clouds, then allow Chaumet to bring you back down to earth with some simple, classic and above all affordable new models in its Liens collection. 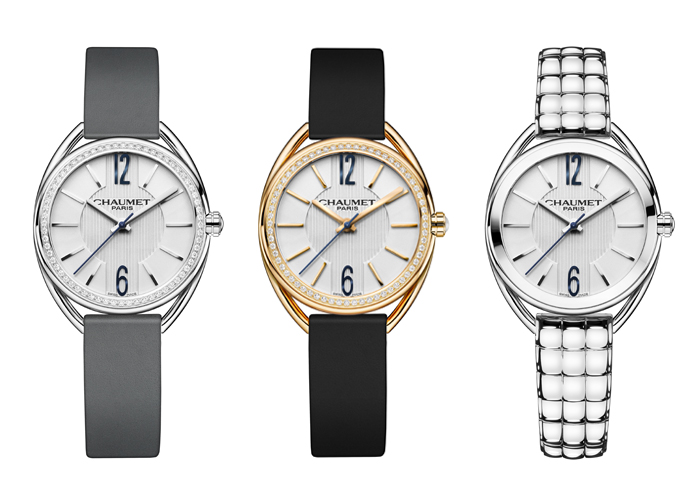 Launched only last year with a 33mm round case, it is now available in a smaller 27mm diameter in steel or 18-carat red gold with the distinctive link that encircles the case and attaches the bracelet. The new models are available with or without a circle of diamonds on the bezel and are powered by the ETA 256.111 quartz movement. Prices start at a down-to-earth 2,400 euros.