One of the first major synergies resulting from Bulgari’s integration into the LVMH group was seen at this year’s BaselWorld with the launch of the chronograph models in the brand’s Octo collection for gents. As Guido Terreni, the head of Bulgari’s watch division, told Europa Star, “the objective is to make the Octo a complete line and we had to have a larger offer for men”. As well as the chronograph, this larger offer includes a new, smaller Octo model with a 38mm case. 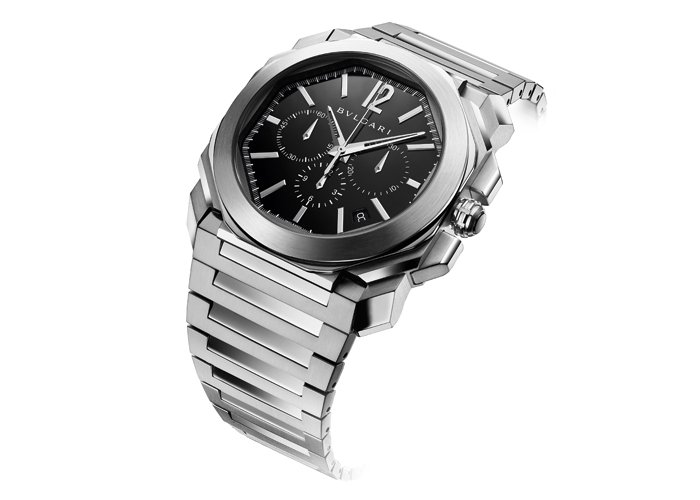 The new Octo chronograph is a marriage between Bulgari’s super-complicated 41mm Octo case, which consists of an astonishing 110 alternately polished and satin-finished surfaces and is produced in-house, and the high-frequency Zenith El Primero chronograph movement, which has a column wheel, silicon escapement and a skeletonised oscillating mass that is personalised for Bulgari. The new chronograph is initially available in three versions, two in steel (with steel bracelet or alligator leather strap) and one in 18-carat red gold with an alligator leather strap. Mr Terreni also admits that “there was a demand for a smaller size Octo. Although the 41mm diameter case is not big itself, it looks bigger because the diagonal length is longer.” New 38mm versions were therefore presented at BaselWorld fitted with Bulgari’s proprietary base calibre, the BVL191 (named after the number of components) “solotempo” with hours, minutes, central seconds and date. In its entry-level stainless-steel guise, this new model will sell for 6,300 Swiss francs, which seems reasonable for a watch with a manufacture movement and compares favourably with the 41mm model, which starts at 7,900 Swiss francs.

The brand’s gents’ collection, which now accounts for around one-third of Bulgari’s watch sales, has come a long way since the Bulgari family first decided to offer men’s watches, as Guido Terreni explains, “When the Bulgari family decided to start making watches in the 1970s it was because men were coming to shop with their partners simply to pay for the woman’s purchases. The brothers therefore decided to offer watches as a gift to the men – free of charge.”

Lest we forget, however, Bulgari is “above all a jewellery brand” according to Terreni and “women will always have priority”. So in line with the important developments in gents’ watches the brand offered a completely new collection for ladies at BaselWorld this year, called Diva. 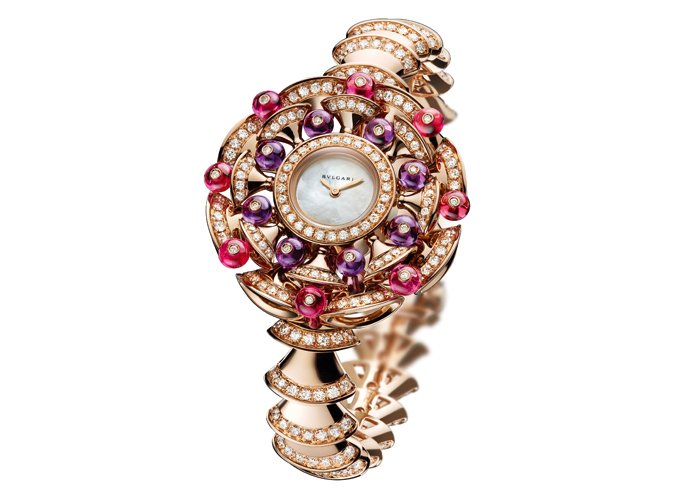 The watches in this collection admirably portray the image – and all its connotations – that this name conjures up. Like the modern-day divas it is a watch that exudes glamour and is clamouring to be seen. Hundreds of brilliant-cut diamonds on each of the four models are sure to catch the attention and are dotted around the case and bracelet to contrast with precious stones such as emeralds, tourmalines, rubellites and amethysts. The ultimate version is fully paved with 394 brilliant-cut diamonds, 302 baguette-cut diamonds and 16 round-cut diamonds for a total of approximately 22.62 carats of diamonds, as well as a case that uses 95.2 grammes of 18-carat white gold. These models can be yours, if you have around 100,000 Swiss francs to spare.

The tiny dials of the Diva collection dictate that a quartz movement (which has been personalised for Bulgari) must be used. But the complexity in these timepieces lies as much in the construction of the case as in its intricate stone-setting. To produce the airy design of the case, with elements that appear to float around the circumference of the watch case, the gold is poured into a wax mould where it solidifies, leaving behind the gaps that give the Diva its distinctive design.

At the opposite end of the spectrum, Bulgari also presented some new, more accessible models in its Serpenti collection at BaselWorld, using onyx, as well as a new full-gold version. Prices for these models will start from a more palatable 5,000 Swiss francs.

If you didn’t get chance to see these new models at BaselWorld, try one of Bulgari’s 300-plus monobrand stores around the world. According to Guido Terreni, this distribution model is extremely important for the brand. “Women are more used to shopping like that,” he says, “It is popular in ‘hard’ luxury and in multibrand stores you have more work to do, because you have a different type of customer.” It would appear that, for Bulgari at least, there is unlikely to be any let-up in the trend towards vertical integration in retail.