“As a shareholder I’m happy; as a creator, disappointed” 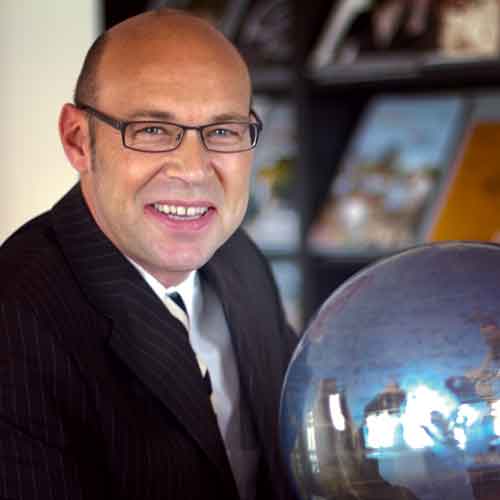 In 2002, a little over twelve years ago, Michael Vogt, a marketing executive who had previously worked alongside Christian Viros at TAG Heuer, launched his own brand: Vogard.

With the help of the extremely talented young master watchmaker Thomas Prescher he designed, perfected and patented a unique way of setting the time zone simply by rotating the crown. It was a first for mechanical watchmaking, and it made him the envy of many major brands. His watch is beautiful, exquisitely designed and highly recognisable. It is ridiculously easy to use, and it is the first watch capable of displaying half-hour time zones (as in Nepal, for instance) and Daylight Saving Time.

It is easily customisable to meet specific requirements (for example, pilots can display major international airports, or golfers can consult the time at the world’s greatest golf courses); it is available in steel or precious metals, with or without subtle gemstone inlays, and will eventually be produced in several models: Datezoner, the only watch in the world that can coordinate time and date changes via the rotating bezel, and Chronozoner, which combines time zones with a chronograph function.

An aficionado of what he calls ‘useful luxury’, Michael Vogt offers watches at modest and eminently reasonable prices: around CHF 7,000 for the basic model in steel, CHF 12,500 for his Chronozoner and CHF 15,000 for the Datezoner. Over ten years he expects to sell 5,000 units, an entirely respectable figure for a small niche brand such as his. The company’s development was completely self-financed, without any bank assistance, although a minority investor helped to the tune of 10%.

Despite this relative success, Michael Vogt has decided to throw in the towel. At the end of November 2014, he announced he had sold his patents to IWC.Everything points to his having hit the notorious ‘glass ceiling’. “As a niche manufacturer and modest watchmaking workshop, we no longer have the financial or structural resources to continue to develop and exploit the full potential of our Timezoner technology,” he told Europa Star. “I really had no choice. We sold well in the Middle East and the USA as, in both these regions, consumers and retailers alike are much more open to new ideas than they are elsewhere. Asia, a crucial market today for all brands, is much more difficult. It is very hard to find distributors who are genuine partners; they all dream of just one thing: working with the big, established brands. The Chinese, for example, don’t buy a product, they buy a brand. Initially, Vogard attracted a great deal of curiosity and interest from retailers, who all privately rail against the big brands, and complain that their margins are being eroded. But when it comes to putting their money where their mouth is, they balk; they’re afraid of taking the risk of developing a brand over the long term when it is still relatively unknown to the general public. For example, I wanted to open a boutique in Shanghai, but when I saw the conditions of the ten-year lease, which stipulated that everything had to be imported from Switzerland – furniture, POS materials, etc. – I realised I was about to jeopardise everything for a single sales outlet.”

While distribution is the biggest stumbling block for a small brand such as Vogard, which has never sold its watches on a consignment basis, other factors have also played a part. “It has become extremely difficult, with just our own resources, to continue to develop distribution, open our own-brand stores or shop-in-shops, and diversify our range as we need to. To give just one example, R&D costs have rocketed over the last ten years. In 2003 one hour cost CHF 150; today we pay CHF 450! Another concern is that over time I have seen several major brands sniffing around my patent, analysing it in detail and trying to get around it. Some even went right out and copied it anyway, but even though I won in court (editor’s note: against Villemont, which subsequently went bankrupt), I didn’t get anything out of it.Quite the opposite, in fact. It was time to come to a decision! And IWC, which was one of the three firms I had identified as possibly being interested in my patents, was very keen. As a shareholder, I am happy. As a creator, I’m disappointed.” So what are his plans now? “Vogard will continue to provide after-sales services for all the watches we have sold, but on the creative side I am going to take some time out. And personally, I admit, I’m looking for a new, bigger adventure!” he acknowledges, as if worn out by all the recent struggles.