AN INFORMAL CHAT WITH TWO STANDARD BEARERS OF INDEPENDENT WATCHMAKING


One is the figurehead of independent watchmakers. His strategy is simple: do everything yourself, and do it with panache! The other is the wunderkind of the new wave of independents. He creates his ‘unidentified horological objects’ with the support of a broad circle of ‘friends’. No prizes for guessing that they are Philippe Dufour and Max Büsser.

AN INFORMAL CHAT WITH TWO STANDARD BEARERS OF INDEPENDENT WATCHMAKING

One is the figurehead of independent watchmakers. His strategy is simple: do everything yourself, and do it with panache! The other is the wunderkind of the new wave of independents. He creates his ‘unidentified horological objects’ with the support of a broad circle of ‘friends’. No prizes for guessing that they are Philippe Dufour and Max Büsser.
A

esthetically, their watchmaking styles could not be farther apart. And yet, as staunch champions of the joys and challenges of independence, in the fullest sense of the word, they are firmly on the same page.

• Europa Star brought them together over a leisurely lunch (*) to hear their thoughts and impressions on the subject. Here are some excerpts from our fascinating discussion.

IS INDEPENDENCE EASIER OR MORE DIFFICULT THAN IT WAS 15 YEARS AGO?

Max Büsser: I joined the business 24 years ago. At that time, there wasn’t so much money about, and watches were not considered particularly glamorous. The clients of fine watchmaking were connoisseurs, well-informed collectors. Today, watchmaking is in fashion, but 80 to 90% of buyers these days know next to nothing about it, and have no interest in learning. However, in my particular case, with MB&F, which made 279 pieces in 2014, and which hopes to produce the same number in 2015, I am targeting a well-informed clientele, as is Philippe. The majority of our buyers are educated collectors.

Philippe Dufour: Yes, it’s a paradox. I recently spoke with retailers in Singapore. It’s more difficult now than it was 15 years ago; your well-informed clients turn up with their jeweller’s loupe, they’ve already read up on the internet, and they just want to check that what they have been told is true. It doesn’t bother me because I know that what I deliver is of the highest standard, but it can be daunting for some.

MB: Independents that make mistakes or who deliver unreliable products do the rest of us no favours at all. Retailers need to be very brave to take on an independent brand. So when one of them screws up, when they lose that trust, we all suffer.

PHD: Independents are not allowed to make mistakes. The big players can afford to bring to market pieces that are not absolutely perfect. They believe that the well can never run dry. After all, they can always hang on to the piece in after-sales for six months or more, if necessary. But not us.

MB: It’s hard to find sellers and retailers that really love the product. To sell an independent brand you have to work at it; you have to set up your network of clients, explain, demonstrate. For the big brands, 80% of that work is already taken care of.

PHD: With the brands, the designers are no longer the decision-makers. Finance and marketing have the biggest say, and they make sure they get the biggest bang for their buck. 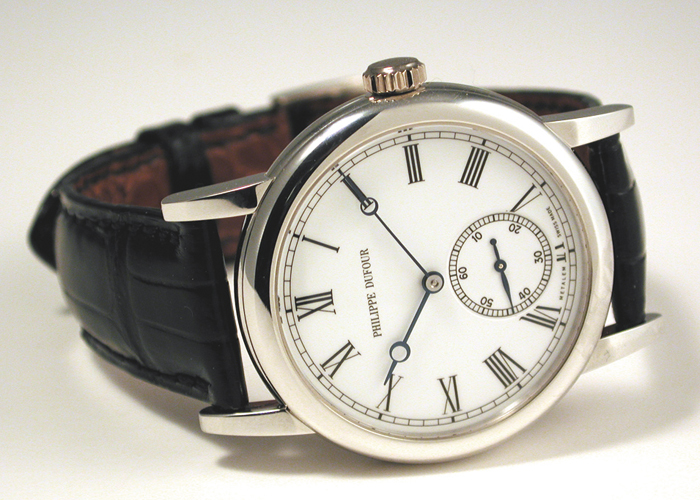 MB: Marketing has taken the pre-eminent role. These days, your average client looks at the brand more than the product. The brand has become all-powerful, we’re witnessing a Louis-Vuittonisation across the whole of watchmaking. I’ve been to some huge retail outlets whose sales staff know next to nothing. The business has grown exponentially, communication budgets have rocketed, so why make the effort? In fact, direct sales are the best thing for cutting-edge independents.

PHD: I sold my first watches in 1992–1993. My first four pieces, I sold through Hour Glass in Singapore. After that I made a lot of direct sales. But in certain countries, such as Japan, you’re obliged to go through a distributor; you have to respect the system that’s in place.

MB: Watchmaking clientele is like an estuary: on one side, you have the broad channel, the immense crowd that is targeted by the big brands, and on the other there are some little streams, those few thousand individuals who are prepared to buy the products of independent manufacturers.

PHD: Our relationship with our clients goes far beyond the purely commercial. In Japan, for instance, (Editor’s note: where Philippe Dufour is practically a god in watchmaking circles) it is very important to meet the person who designed the watch. They don’t need George Clooney to act as middle man. True celebrity is in the product itself, nestled inside the case.

MB: Porsche, for example, couldn’t care less about the anonymous customers who buy all the 190,000 models they produce each year. The person who buys a Pagani, on the other hand, of which there are only a hundred or so in existence, is helping the brand to survive; he’s participating in a creative process. The same goes for us: our clients are part of our creative adventure. The concept of critical mass is key: one of the reasons we remain independent is to have the luxury of staying small. In 2013 I took an executive decision that we wouldn’t grow any more. When you get too big it becomes less of a pleasure, management takes over. Yes, you make money, but what’s the point? Creating and remaining creative takes huge amounts of energy and costs a fortune. Designing one calibre per year, as we do, is all well and good, but it requires a substantial cash flow. We can’t afford to hoard our money, we have to reinvest constantly if we are to retain our independence.

DOES WATCHMAKING HAVE A SOUL?

MB: The soul of watchmaking is the soul of its creator. If the creative impulse is strong and if it’s personal, the object will have a soul. If it’s made by a faceless corporation, it will have no soul. When I wear an Urwerk, for example, I think about Félix Baumgartner and Martin Frei, who worked like Trojans to make it a success. They put their heart and soul into it, and you can feel that.

PHD: We are selling emotion. All the marketing people use the same formula, but for us it’s real.

MB: Your watch is your novel.

PHD: Yes, I’ve written three and a half now, nearly four. And I wrote them all by myself!

MB: If the message put across in order to sell a watch is about social status, the watch automatically loses any soul it had. Watchmaking is a technically obsolete art, and this, paradoxically, is our saving grace. In 1989, as a young engineer just out of the EPFL (Editor’s note: Swiss Federal Institute of Technology in Lausanne), I paid some watchmakers a visit. They told me: “We don’t care how much you know. What we do is pointless.” That’s when I knew I wanted to be a watchmaker.

MB: MB&F would not be here today without the six retailers who first placed their trust in me, and therefore financed me. I was only able to do it because, before creating my company, I was CEO of Harry Winston, and consequently had a solid address book. You can’t put a price on that. Or on the editorial support of the press, which immediately picked up on our original approach. Without this support I would never have succeeded. But what do we hear today? No one wants to take the smallest risk any more. “Come back in a couple of years, if you’re still here!” they say. All the independents that are successful today were self-financed. All those that relied on outside investors are now on life support. You need to have an entrepreneurial spirit, and that comes through in the product.

PHD: It’s like bringing up children; it’s harder if you need to use crutches. For instance, for my Grande Sonnerie, I put out a call for someone to make gear trains. I would have had to put half a million Swiss francs on the table. If I’d had a crutch, I would have leaned on that, and I would made that investment. But as I didn’t have the money I did it myself; I cut all my own wheels. It took me two and half years without a break. In 1992 I sold the piece for CHF 600,000 (Editor’s note: at today’s rates the price would be closer to two million). I didn’t make any profit on the first six. With the 7th and 8th, money finally started coming in. Solitude was a necessary ‘good’. 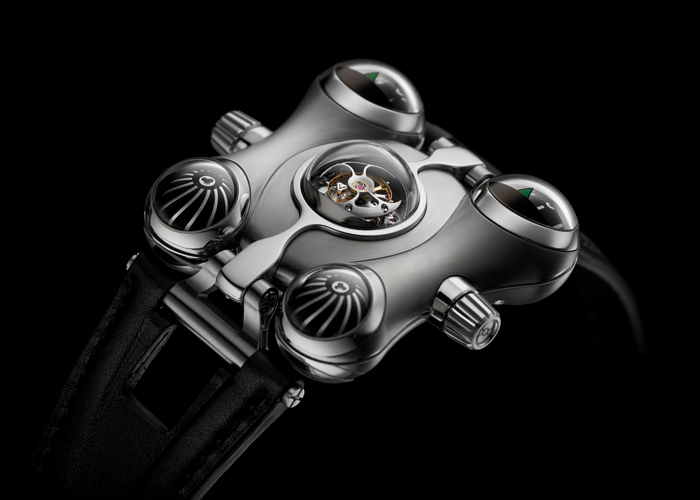 MB: It bears repeating: having an external shareholder is the biggest mistake. Your motivation changes: you have to grow at all costs, rather than being content to find the best way to express yourself.

PHD: In the beginning everything is fine, all investors are ‘patrons’. Six months down the line, the same people are only interested in the return on their investment.

MB: Having said that, the entry price is far higher than it was fifteen years ago. But, on the other hand, we have tools that didn’t even exist back then: the internet, social networks. However, it’s also true that all the brands are using these channels to shout their message as loudly as they can. Those who prefer to whisper have trouble making themselves heard. Independents sometimes feel like the dwarf at the bar.

PHD: And you also need some financial muscle. I started out in 1978. In the beginning I did restoration work and made watches for other people. I submitted the patent for my Grande Sonnerie in 1992, but it wasn’t until 2003 that I finally managed to balance my books.

PHD: One of the great qualities of independence is the community spirit that binds us together, the open exchanges, the positive contact, friendships even, and perhaps most of all, the transfer of knowledge. That’s our role: to pass on our expertise, and to reach out, in all senses of the word. Why not work with Chinese enamellers, or Japanese master watchmakers? Why not work with external artists? We have to globalise the phenomenon, open up, share. That’s also what independence is about.

MB: Independents do a lot of things together. We’re mates, we work together, we exchange information, we exhibit our products in the same places. Of course there are always opportunists, but they aren’t hard to spot.