“Digital can also equate with luxury”

Slyde presents itself as a ‘luxury digital manufacturer’. Launched in 2012, the Swiss brand proposes an original concept: transforming movements and complications such as tourbillons into a virtual reproduction, and displaying them on the watch’s digital dial. Average price: 8,500 francs. “We give access to complications at an affordable price,” points out Nicolas Courcoux, Slyde’s sales director. The first watches were delivered at the start of 2012. At the time, no one had heard of smartwatches. Mr Courcoux instinctively rejects the comparison, however inevitable it may be. “We do not offer any kind of connection to a mobile phone. There are no buttons, everything is tactile. But if you want to draw a parallel, I’d point out that the mobile phone did not replace the Leica. What is more, our power reserve is between three days and three weeks, depending on use, which is far more than a smartwatch. The main challenge for the smartwatch remains the very short battery life.”

The result of a partnership between famous watch designer Jörg Hysek and investor Alain Nicod, who specialises in new technology, Slyde navigates the waters between two worlds. The product was in development for three and a half years, and required significant investment, of the order of 10 million francs. The bottom line? “We are almost in the black. But in watchmaking, profitability is a long-term undertaking. Paradoxically, the crises have helped us. Consumers in China and Russia are looking for Swiss made Haute Horlogerie at a cheaper price point, which is what we are offering. Also, we don’t need to source dials, hands or movements, which are bottlenecks in the watchmaking market.” 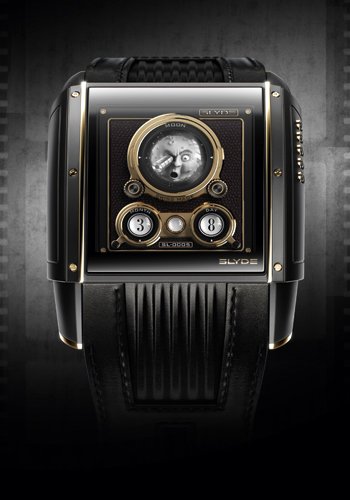 The fall of the ruble is nevertheless having a negative effect on the brand’s sales, almost 50% of which come from Eastern European clients. “But we have a solid base in Japan, Dubai, Paris and the United States. And unlike other brands, we are fortunate to have two sources of revenue: watches and digital movements. The latter are solely for Slyde models.”

The company has a presence in around a hundred multi-brand stores around the world. “It’s not easy to convince retailers to take a chance on a new brand. These days, some watchmaking groups and large independents are monopolising the storefronts. In our case, we also have to convince retailers that digital technology can be considered a luxury, that we are complementary to the top brands.”

Today, Courcoux sees three possible escape routes for small independent brands: focus on the high-end market, have access to significant capital, or develop a truly revolutionary product. “Or, even better, all three.” In his opinion, many small independent brands are under imminent threat.“Many of them were able to survive thanks to China and Russia. Russians in particular are keen on unconventional brands. The fact that both these markets are falling off at the same time represents a serious problem for the industry. Not all of them have had enough time to develop the more mature markets.”

“Sooner or later, you end up being bought out by a group; it’s inevitable,” opines Nicolas Courcoux, pointing to the recent example of Ulysse Nardin (now a subsidiary of Kering). “A number of independent brands, even some quite large ones, are currently looking for a buyer. A lot of them are unprofitable. In a group, the profitable brands can cover the losses of those that are not.”