A beacon of hope amid the difficulties that are assailing the independent brands today, Louis Erard proves that, with time, it is possible to break through, even if you’re small (the company has 28 employees), and provided that you are flexible and responsive to all the challenges that may arise. It’s not pretty: Director General Alain Spinedi says he has been “on a war footing since 2003”.

That year marked a turning point for the brand, then apparently at death’s door. Entrepreneur Alain Spinedi took over, and made the decision to focus solely on mechanical movements. Hence the brand’s motto ‘Swiss Mechanical Watches’, which has stuck, despite the fact that many Louis Erard watches now run on quartz. “When there are 800 brands worldwide, it’s not easy to turn up with the 801st. In the beginning, no one needs you, in theory. In 2003 we adopted an original position, for an independent brand, producing models that cost between 600 and 2,000 francs, equipped with ETA movements.”

What happened then? A series of crises, during which the brand managed to keep its head above water. The first occurred in 2007–2008, when ETA announced that it was unable to increase deliveries of mechanical movements. “We were obliged to raise the price bracket up to 3,000 francs. In parallel, we launched our first ladies’ watch collection. Up until then we had only offered men’s mechanical watches.” 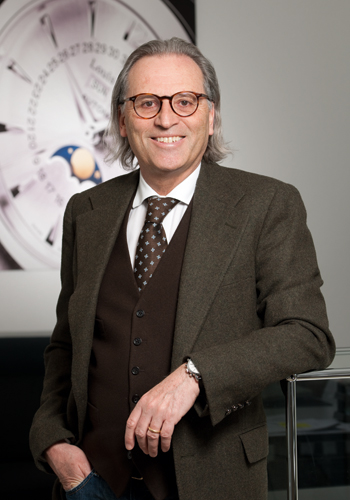 The second crisis fell in 2009, and affected the entire watchmaking industry, which lost 25% of its turnover. Here too, Louis Erard managed to limit the damage, recording a drop in sales of ‘only’ 6%. But the third crisis would be the most challenging: the strong franc. And with the recent decision of the Swiss National Bank to abandon the ceiling on the Swiss franc / euro exchange rate, the short-term prospects are far from encouraging. “In Italy, for example, because of the strong franc the price of our watches has virtually doubled. And over the same period, Italians’ buying power and salaries have certainly not increased. Quite the opposite, in fact. And this is a big challenge for us.” Hence the decision to abandon mechanical purity and include some quartz movements, in a bid to retain the starting price of 600 francs.

Alain Spinedi is trying to remain optimistic. “Wherever there’s a crisis, there’s an opportunity.” His brand recently proved this adage with a particularly adroit move: further to Swatch Group’s decision to desert Swiss retailer Gübelin, Louis Erard will now be represented by the powerful watchmaking shop network. “Through these crises we have grown from a niche brand to a more complete company. Our image has strengthened.” Starting from zero in 2003, Louis Erard today has a turnover of almost 12 million Swiss francs, and is approaching 20,000 units sold. Nevertheless, the threats remain: alongside the increasingly strong franc, there are geopolitical upheavals in the Middle East, Ukraine and Turkey. “These days many markets have become unpredictable.” Switzerland still accounts for one third of the brand’s sales, ahead of Russia, whose economy has taken a turn for the worse. The brand is now looking to open new markets, including in China.

Twelve years on, would Alain Spinedi do the same again, if he had to start over? “At the time it was possible to launch a mid-range brand, but not any more. It’s no longer a particularly profitable niche for a newcomer. Anyone starting out today would have to bring some new ideas to the table.”Alain Spinedi is disappointed by the current lack of diversity in the watchmaking landscape: “There’s been a kind of lockdown, particularly in terms of distribution. Not so many years ago, watchmaking was a rich source of imagination and inspiration for many designers and entrepreneurs. Today we see the same stereotypical brands in shopping centres all over the world.”