On 1 November 2013, 35-year-old Aurélie Picaud was appointed head of Fabergé watches. Her brief was to resuscitate the watchmaking branch of the celebrated Russian jeweller. Scarcely a year and a half later, at Baselworld 2015, a rumour spread through the aisles: go and have a look at Fabergé, some amazing things are happening! This is the story of an incredible journey.

It all started with LinkedIn. While product manager of ladies’ watches and Royal Oak for Audemars Piguet, she was invited for an interview with Sean Gilbertson, Fabergé’s CEO (see sidebar). The interview was fascinating, but the actual job on offer was not particularly well defined. And also, they thought she was probably a bit young. But Aurélie Picaud was hooked; ideas started bubbling to the surface and she persisted. After making a convincing case she was eventually offered a contract, and an incredible journey began.

Since 2013 Fabergé has belonged to Gemfields, a mining group that is the world leader in responsible sourcing of coloured gemstones, mainly emeralds and amethysts from Zambia and rubies from Mozambique. It bought Fabergé from the mining investment company Pallinghurst Resources, which valued the jeweller at 142 million dollars. Pallinghurst Resources, whose chairman is Brian Gilbertson of South Africa, retains a stake of 49.3%. His son Sean Gilbertson is now CEO of Fabergé, after taking over from restructuring specialist Robert Benvenuto, who left in June 2015. “His departure has not affected Gemfields’ commitment – obsession, even – with Fabergé,” confirms Aurélie Picaud. “The owners came to Baselworld this year and they were really quite flabbergasted. They discovered a world they knew nothing about, and in which they are determined to become major players.” They have certainly made a convincing start.

Splitting her time between London and Geneva, Aurélie Picaud began to formulate her plan. She delved into the rich and somewhat madcap history of the wildly inventive and versatile Russian jeweller known all over the world for its imperial eggs. She decided to launch four strong lines in parallel: a women’s complication, a ‘conversation piece’ for men, a jewellery watch and a classic collection of seven models. Her superiors wanted fast results. But how was she to achieve this, from a standing start? She devised an original, decentralised strategy: for each line she went in search of a different team, chosen from among the best in the country, who would master every stage of each individual project. 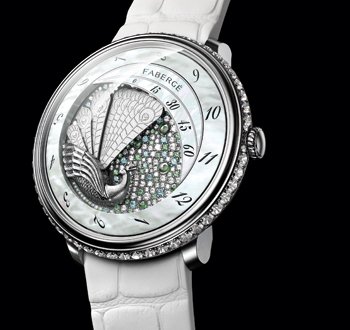 LADY COMPLIQUÉE PEACOCK 38MM BY FABERGÉ
The peacock’s golden, bejewelled tail gradually opens to indicate the minutes shown on a mother-of-pearl scale that slowly progresses around the dial, while another mother-of-pearl ring indicates the hours read off against the crown wheel.

For the ladies’ complication her thoughts immediately turned to Jean-Marc Wiederrecht. The poetic and creative boss of Agenhor (Van Cleef & Arpels, Harry Winston Opus, etc.), an expert in retrograde animations, was the obvious choice to create a foundation piece unlike any other. But Aurélie did not want just any old module, she had her heart set on a movement designed exclusively for Fabergé. Jean-Marc Wiederrecht declined. But she continued to press, and was finally granted an audience with the master watchmaker. She explained her idea: she wanted to draw inspiration from two famous Imperial Eggs – the Peacock Egg and the Winter Egg. She wanted mystery and surprise, but they also needed a story. By the end of the meeting the watchmaker was more than convinced; he was enthusiastic. And he even had an idea; it had been suggested to him by journalist Louis Nardin on his return from a lengthy trip to Asia. Mr Nardin had come up with the idea of a fan that could be turned into a beautiful watchmaking complication.

While the Lady Compliquée Peacock and Winter Time were incubating, Aurélie Picaud met an entirely different team to start the ball rolling for the men’s ‘conversation piece’. Here too she banked on excellence, by entrusting the project to Giulio Papi of Renaud Papi, the complications arm of Audemars Piguet. She wanted a flying tourbillon, but insisted that the manufacture of the timepiece be driven by the design, which should be dynamic with a hint of mystery, not giving everything away all at once. The Visionnaire I was on its way. 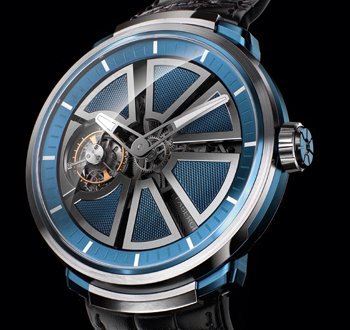 VISIONNAIRE I BY FABERGÉ
The face of the Visionnaire I conceals as much as it reveals under a sublime dial cut into seven curved trapeziums, like an open egg shell. The design recalls Fabergé’s speciality and reveals its mechanical heart, the handwound calibre TOF14 flying tourbillon movement.

A different watch, a different team: Dick Steenman, a master engraver specialising in fine jewellery, was given the task of producing a high-end piece entitled Summer in Provence, which pays tribute to the unbridled baroque inventiveness of Peter Carl Fabergé.

Finally, for her core collection, Aurélie Picaud went to talk to Vaucher Manufacture. The result was the Lady Fabergé, an understated, elegant and sleek automatic in 18- or 22-karat gold. The course was set. This young woman, travelling back and forth between London and Switzerland, personally coordinated all the different divisions and métiers involved. Wisely choosing not to put all her eggs in one basket, she entrusted the cases for each watch to different producers.

Baselworld 2015: all the timepieces were ready and the buzz was everything she could have hoped for. A particular tone and style were evident from the outset. “I want to move towards the objet d’art,” says Aurélie Picaud. “I want to break certain codes, I want our watches to be mischievous. I want to blend innovative techniques with a unique appearance that is not afraid of extravagance or the baroque, that perhaps veers towards the kitsch on occasion, but nevertheless remains the height of refinement.” When a comparison is drawn with Van Cleef & Arpels, she is quick to counter: “Our timepieces are far less figurative, more abstract, more crazy at times, and that is how they will remain. We play around with combinations of techniques, materials and colours: engraving, guilloché, gem-setting, gold, platinum, titanium, tourmaline, enamel, flowers sculpted in mother-of-pearl.” Many retailers present in Basel were keen to take a look. In addition to Fabergé’s own boutiques (in Geneva, New York and Harrods in London), some thirty wholesale partners will be selling its watches beginning this autumn, in the Middle East, Germany and the USA. At the end of September the company opened a workshop in Geneva, “in order to control the entire supply chain, assembly and after-sales service, which will be brought on board gradually.”

Fasten your seatbelts, it’s going to be quite a ride! Bravo, Mademoiselle Picaud.