MCT changed hands just a few years after its launch, but its buyer, who has now been at the helm for four years, has shown evidence of some joined-up thinking. MCT is forging ahead and adapting, while remaining true to its founding spirit.

MCT (which stands for Manufacture Contemporaine du Temps) was founded by Denis Giguet in 2007 – frankly not the best year, on the eve of the financial crisis, to launch a new, independent, innovative, complex and expensive watch brand. It could easily have foundered when its creator jumped ship in 2011. But then, happily, a purchaser, Cage Holding SA, came on the scene. This company, according to its own PR, is the “consolidation of a group of Russian, Belarusian and Swiss companies involved in banking, finance, brokerage, manufacturing, retail and real estate in several countries of Europe and Asia.”

The purchase of MCT was Cage Holding’s first venture into watchmaking, one it saw as a “long-term investment” that would give it a unique opportunity to expand its activities in Switzerland.

More than three years after the purchase, Cage Holding seems to be keeping its promises. MCT, currently chaired by Kristina- Ripsimé Ambartsumian and managed by François Candolfi, has not only continued on the radical path set by its creator, by developing new products in complete coherence with the company’s founding spirit, but it has also visibly committed to integrating its creative and manufacturing capabilities.

MCT’s operational division, based in Neuchâtel, now includes several units: STM is responsible for developing MCT’s in-house calibres; Digitale performs assembly, acts as a high-quality laboratory and develops complications (including for third parties); and MCH, which was bought in 2013, mainly does assembly work for other watch groups. Although, for the time being, components are made in cooperation with other companies in the Jurassic Arc, an integration programme has been developed with a view to eventually achieving complete control over the production chain. 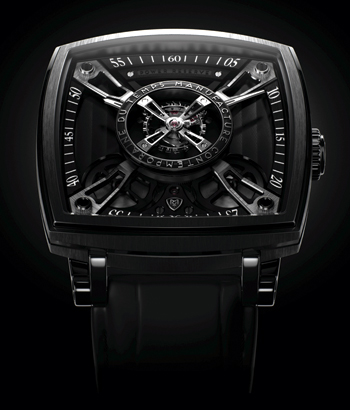 SEQUENTIAL ONE AND TWO

The Sequential One (or S100), released in 2008, caused a stir for both its refined and sensuous cushion shape (by designer Eric Giroud) and its radically different way of digitally telling the time. The hour is displayed on four modules, each comprising five pivoting triangular prisms. The minutes are indicated by a central C-shaped 270° disc that turns 90° to the left at the top of each hour, revealing the hour on the next module. Although the mechanism is difficult to describe, once on the wrist telling the time proves surprisingly easy, although somewhat counterintuitive. This manually-wound watch with its 471-piece movement and its special system for accumulating the energy required to rotate the minutes disc and prisms, immediately earned MCT a place in the group of ‘new watchmakers’ looking for unusual ways of telling the time, alongside MB&F, Urwerk, Hautlence and Cabestan.

The new team brought on board in 2013 put their initial efforts into perfecting this pioneering product and improving its reliability, before branching out into different materials and giving the watch a more ‘urban’ design makeover.

One year later, in 2014, the first breakaway model appeared: the Sequential Two (S200). The watch retains the iconic hour modules, but the shape is radically different. Now round, it has a single hand for the minutes, mounted on a central C-shaped disc that pivots 90° every hour. But because the minutes take a more traditional 360° trajectory around the dial, the S200 is easier and more intuitive to read. Its movement, developed in-house, was entirely redesigned and modified to become self-winding thanks to a micro-rotor.

SAYING GOODBYE TO THE PRISMS

The next step, which will no doubt prove decisive for the brand’s growth potential and its ability to extend its range, was to say goodbye to the prism-based hour indicators, which had become MCT’s signature. This was not an easy move for the brand, as it had to nevertheless remain “totally MCT”. This crucial task was entrusted to the Frequential One (F110). Why ‘Frequential’? Simply because this watch gives centre stage, both literally and figuratively, to its balance wheel. [After MB&F’s Legacy Machine, and Manufacture Royale with its 1770 Voltige, this focus on the balance wheel is becoming something of a steampunk trend.] Placed regally in the centre of the dial, it beats at a stately 18,000 vph. The balance wheel becomes the primary focus, the central star around which the hours and minutes orbit, indicated by two hands that appear to float above the dial. Yes, two hands: a first for MCT. The challenge is a mechanical one, because in order to place the escapement in the centre, the drive train has to fit beneath the movement. The hands are held inside barrels, guided along by ball-bearings and mounted on ruby spindles.

The hand-wound movement that drives it was entirely developed and assembled in MCT’s Neuchâtel workshop. What makes the Frequential One still unmistakeably ‘MCT’ is probably its return to the cushion-shaped case, this time slightly reduced in size and softened, paired with the sombre aesthetic that defines the brand’s DNA. The first Frequential will be the foundation of an entire line, with a central tourbillon due to make its appearance in 2016.

Nevertheless, the characteristic prism display will not vanish forever from MCT’s range. Quite the opposite. The aim is to anchor it even more firmly, by adding ‘classical’ complications; a minute repeater, large date, perpetual calendar and column wheel chronograph are all part of the brand’s long-term vision. The brand currently has a presence throughout Asia, in India and Russia, but partnerships are “difficult”, we are told. Available in Switzerland in the Kirchhofer and Les Ambassadeurs stores, MCT is launching into the USA and developing exclusive collections in partnership with its retailers there.