He is known as the White Wolf. Feared by some, admired by many, hated by a few, Yvan Arpa, the founder of ArtyA, one of the most ground-breaking watch brands of the decade, leaves no one indifferent. 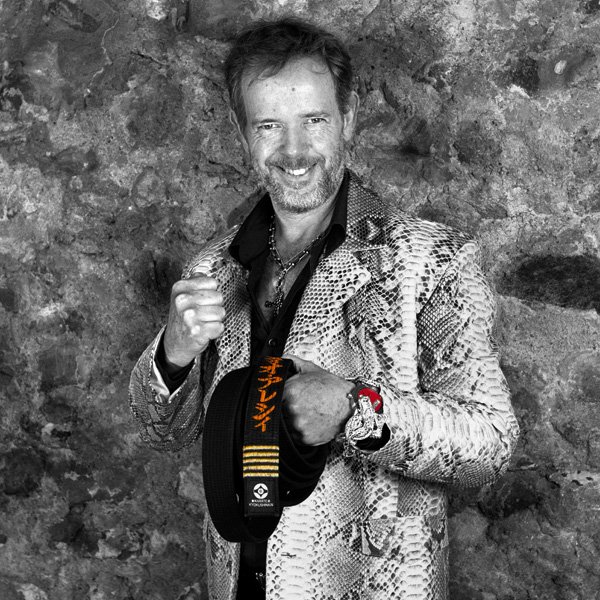 Yvan Arpa
Object: BLACK BELT
“Before ArtyA I launched a watch brand aimed at martial arts enthusiasts, called Black Belt Watch. What I liked about this concept was that money alone was not sufficient to buy the product: you had to show your black belt. At the same time, the market was huge: there are 17 million black belts around the world! There was just one basic model, but I didn’t want to exclude people, as long as they liked the product. Now, to buy a Black Belt Watch you ‘simply’ have to pledge to respect the code of bushido. It’s about ethics and personal growth: if you feel you embody these values, the watch is for you! If you don’t, that’s a matter for you and your conscience...” (Yvan Arpa)

How did you end up in watchmaking?

My journey has been an unusual one. I started out as a maths teacher. After a while I quit teaching and went to Thailand, where I was able to indulge my passion for martial arts, fighting in a discipline that you could call the precursor to MMA. At the time there were very few foreigners practising this discipline in Asia. I then decided to cross Papua New Guinea on foot, which took some time. I experienced a creative epiphany there: there are hundreds of different ethnic groups, art forms and language groups on the island. On my return to Switzerland I decided to devote myself to an ‘indigenous’ Swiss industry. Banking didn’t appeal to me, so I chose watchmaking.

Where did you start out?

I began in analytical marketing with the Italian brand Sector, which is associated with extreme sports. I worked on the ‘No limits’ concept, which became emblematic of the brand. Richemont then asked me to join their group, and that brought me closer to the products – watches remain central to the industry, after all! At Baume & Mercier we tightened up the number of references and launched successful lines including the Catwalk and the Hampton. I moved to Hublot during the Big Bang era. I had great respect for the owner’s values and activities – he donated part of his profits to an orphanage in India. I remained four or five years with each of these companies, on average. But emotions always win out in the end; even with a rational approach and ambitions, the boss will make decisions according to his instincts. In a group, just when you think everything is under control, you can be sure that it isn’t!

In 2006 you embarked upon the Romain Jerome adventure.

The owners of this young brand, which at the time specialised in golfing watches, initially contacted me about an audit. This turned into a bold relaunch of the brand. My condition for joining them was that I had to have real creative freedom. The first watch I launched was the Titanic, a provocative piece containing some fragments of the ship. Because the brand name wasn’t very well known, it was important to link it with an icon, and also some ‘antimatter’ - which in this case was rust! In the absence of a distinguished history the product had to be the star of the show. People think I’m a crackpot, but I have a rational approach and my ideas are serious. To start with, everyone was on my case, apart from a few enlightened journalists who took the time to hear me out. And in the end, my creative approach was fully vindicated. What may shock the more sensitive souls is that I don’t make compromises. My philosophy rests on the values of bushido, the conceptual basis of the martial arts.

What does that imply?

Respect, courage, compassion and loyalty. I’m very up-front. I’m not afraid to say what I think, and I’ll say it to your face. I don’t beat about the bush. That’s what helped me to bounce back and keep going, when the adventure with Romain Jerome came to an abrupt end. I could have gone into a downward spiral, both financially and psychologically. It took iron discipline. In my life I have been involved in 34 court cases. I have never initiated any myself, and when I’m attacked I hit back. I won them all. That’s what enabled me to launch ArtyA in 2010. You need to be brave to launch an independent brand, with no compromises, and also no money... One of the only people who supported me was Jacob Arabo: I helped him to relaunch his brand.

People sometimes find ArtyA hard to define as a brand. Can you give us a few pointers?

As an independent family firm we didn’t have the visibility or hitting power of the watchmaking giants. Our aim is to do things that have never been done before in innovative and creative high-end watchmaking. I work with my wife, Dominique, who pioneered the Butterfly dials – before Harry Winston, I should point out! Where we are different is that we cover every price range, with watches that cost from CHF 3,000 up to CHF 800,000. This is completely unheard-of for a new, independent brand. Other newcomers have either targeted the entry level with high volumes, or they focus on the high-end. Our first models were struck by lightning using a special process. That’s how we made our name. Then I launched the ‘Son of ...’ series. The brand’s DNA is creativity. This year I have two aims: to launch some grand complications and to promote the new Race collection, which has come explosively out of the starting blocks.

What is your client demographic?

I attract people who are looking for a little bit of soul. At the end of the day, buying a watch is a tribal thing. I don’t target people who feel proud about owning a branded watch, but clients who are looking for a more highly-developed product, something out of the ordinary, clients who are tired of seeing the same old conventional models on their friends’ wrists. I could have chosen to remain in a gilded cage, bringing out variations of the Russian Roulette model, for example, which has sold very well, but that wouldn’t satisfy me on a creative level. On a financial level, maybe. But creation is my outlet, my catharsis, it’s what drives me!