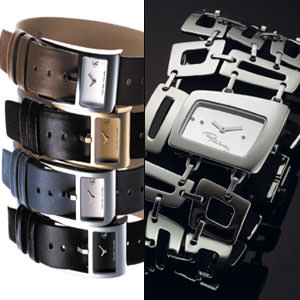 Calvin Klein
Created in 1997, the Calvin Klein and cK watches represented the incursion of the very large Swatch Group into the world of the fashion watch. By associating itself with a fashion phenomenon, famous for the emblematic and anaemic young people of the 1990s, the Swatch Group launched the first wave of the 'fashionization' of the watch industry. The success of this operation has been due primarily to the unusual alliance between the industrial and commercial power of the largest watch group in the world and the marketing and communication strength of the New York fashion designer. Volume joined forces with image. This success is also due to the keen fashion sense of Arlette Emch who co-managed the operation. All the watch collections were updated in 2002 and are present in more than 50 countries. The brand was also introduced into China in June of 2002. Opting for a minimalism derived from studying the designers of the 1980s, Calvin Klein is among the world's most important fashion watch brands. However, its hard and pure design, very 'end of the 20th Century', runs the risk of being supplanted by the new 'baroque' that is gaining in popularity. On the other hand, the rapid reactivity of the Swatch Group, such as was demonstrated with its Swatch watches, means that opportunities still abound for this brand.

Cavalli
It was in 2001 that Roberto Cavalli concluded a watch licencing agreement with the Sector Group. This was precisely at the time when the brand's products literally 'exploded' in the international marketplace, especially in the United States. The luxurious extravagance and conscious ostentation of the clothes and accessories signed Roberto Cavalli found their logical extension in his watch collection. These timepieces are functionally simple yet very sophisticated in terms of design and style. From this point of view, Roberto Cavalli is situated in the avant-garde of a trend that is becoming increasingly popular - Baroque. The styling of the cases and the perfectly unusual lines of the bracelets follow a design that is completely foreign to the dominant traditional appearance of today's timekeepers. In this vein, Roberto Cavalli is a pioneer. Will he set a new baroque trend or will he disappear in the shifting sands of luxury?