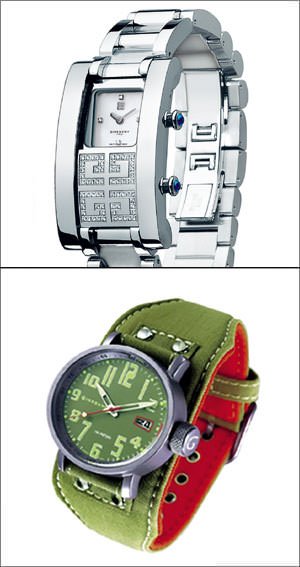 Givenchy
Givenchy watches have been manufactured by Jacques Bénédict since 1981 - which along with Gucci makes them the oldest of the so-called 'Fashion' or 'Designer' brands. The style of the Givenchy watches has remained true to its original concept and form of the square and the rectangle (the basis of the Givenchy logo) - although round watches are in the collection.
“Givenchy watches are a part of the genuine world of horology,” Jacques Fontaine underlines. "If our watches were taken over by, for example, Longines, they would fit in perfectly to their collection because from the outset we made quality watches. Today, we have fast food and now we have 'Fast Watches' that are made and sold in the manner of T-shirts. The watches are produced and sold cheaply and because of that everyone wants a so-called fashion or designer watch for a few dollars. The basic problem is not one of style, its the consumer who compares prices and can find inexpensive fashion/designer watches. This short-term approach is in fact ruining the business for the genuine 'designer' brands like Gucci, Chanel, Dior and ourselves. If you add to that the economic problems in Central and South America and the penchant for cheap watches in the United States, I have to say that business this year is not what it used to be. In addition, the flooding of the watch market in 2002 means that we now have to wait for the pipeline to clear.
I'm not going to quote figures at you, I'm offering you an analysis of the fashion/designer watch market today. Our business is being dragged down by the manufacturers of 'Fast Watches', we are being betrayed by their business strategy and I don't see the situation changing for at least three and probably up to five years.
Fortunately, we are still selling well in the Asian and Middle Eastern markets!"

Giordano
Giordano, a trendy clothing retailer, was founded in Hong Kong by Jimmy Lai in 1980 and today operates or franchises in around 1,100 stores in Mainland China (its primary market), Taiwan, Singapore, South Korea, Australia and the Middle East. Sales figures for 2002 were US$ 460 million.
Giordano watches, which were introduced onto the market in June of 2000, are manufactured by Solar Time of Hong Kong, the watch licensee of Giordano International. A conservative estimate for annual sales is 150,000 watches and growing.