Since the arrival of Frédéric de Narp as the company’s CEO in January 2010, Harry Winston seems to have doubled its efforts in the watch division. It employs some 120 people, out of a total of 450 at the jeweller, whose prestigious reputation far exceeds its sales: US$114 million in 2009—a difficult year—for ‘only’ (we might be tempted to say) 19 boutiques.
Frédéric de Narp seems quite determined to give a strong impulsion to Harry Winston timekeeping, and in all domains: development of a production tool by the gradual integration of new metiers (recently, the brand sold its shares in the Cadraniers de Genève enterprise to François-Paul Journe in order to develop this activity in-house); opening of new points of sale, 15 this year, as well as new stores; the launch of new collections, first at BaselWorld, followed in June with the announcement of the highly anticipated new Sport collection, said to be more “affordable” and “wearable throughout the day”.
The year 2010 has served Frédéric de Narp well in his intentions, since it allowed him to remind everyone with panache that the brand has acquired real watchmaking legitimacy thanks to the tenth anniversary of the Opus. Launched in 2001 by Max Büsser, who was then at the head of Harry Winston’s watch division, this collection of ten watches—the eleventh will be unveiled at BaselWorld—has been a veritable pioneer in the birth of the ‘new mechanical timekeeping’. Its creative laboratory has brought together the world’s most avant-garde watchmakers who have all had their hand in creating an Opus: François-Paul Journe, Antoine Preziuso, Vianney Halter, Christophe Claret, Félix Baumgartner (Urwerk), Robert Greubel & Stephen Forsey, Andreas Strehler, Frédéric Garinaud, Jean-Marc Wiederrecht & Eric Giroud, and Jean-François Mojon. What an amazing list!

Now, it’s all about the tourbillon
In order to heighten its accomplishments in the land of Haute Mechanics even more, Harry Winston has launched a second collection of prestige mechanical timekeepers, which could be considered as the second family of the Opus line. This second collection, however, is devoted exclusively to the tourbillon and is called ‘Histoire de Tourbillon’.
The difference between these watches and the Opus timepieces, whose design was entrusted to a different master watchmaker for each piece, is that the Histoire de Tourbillon is realized in collaboration with CompliTime, the company belonging to Robert Greubel and Stephen Forsey, who work for third parties upon request. In the same vein, Antoine Tschumi has been entrusted to come up with the design of the new watches.
After the ‘Histoire de Tourbillon 1’ presented in 2009, 2011 is the year of the ‘Histoire de Tourbillon 2’. Very striking from a visual point of view, this piece was created to showcase, in the most spectacular manner possible, the bi-axial flying tourbillon, combining two concentric carriages that drive it in a multi-dimensional rotational movement, in all positions. The tourbillon also occupies the largest surface of the watch. Devoid of an upper bridge and inclined at 10 degrees, it is only fixed on the side of the movement and thus seems to be suspended in air, as “if released from the mechanism driving it,” says the brand.
The internal carriage, holding the balance, balance spring and escapement, makes one complete rotation in 40 seconds. It is housed within the outer flying carriage, made of titanium, which makes one rotation in 120 seconds, or two minutes. The edge of the outer carriage is graduated, thus displaying the seconds. The other time functions are off-centred, and separated into their own respective dials. The minutes are read on a disc at 6 o’clock, while the hours are read by a hand in a dial at 2 o’clock. Each of these dials is compartmentalized like a small case of its own, thus evoking a multi-dimensional architecture, off-centred and located on different levels. With eight different sapphire crystals (five on the dial side, three on the case back), the Histoire de Tourbillon 2 features a 48.5-mm case in polished, satin-finished and shot peened white gold (“a monumental white gold structure,” according to the brand). 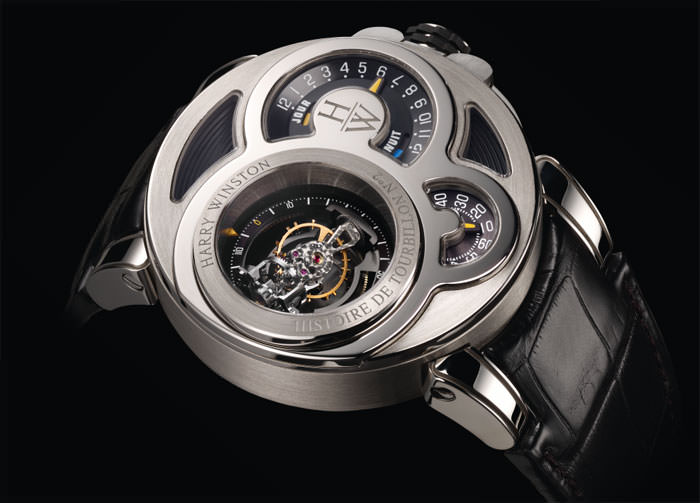 From a design point of view, the timepiece has no relation to the ‘neo-classic’ trend that is currently blowing across the watchmaking landscape. On the contrary, it is a very imposing and ultra-contemporary timepiece, with great attention to detail such as the straight-line guilloché motif on its dial that can be seen through two openings, the choice of letters and the orange and blue touches of its hands and the day/night indicator shown in the hour dial. The brand is producing this exceptional tourbillon in a limited series of 20 pieces, whose price is as high as its size is large: CHF 520,000.