The very innovative Calibre Royal by Pequignet is here!


The very innovative Calibre Royal by Pequignet is here!

The French brand Pequignet is now realizing its goal of creating a revolutionary calibre that combines reliability, torque, precision, symmetry, space, elegance and the integration of complications directly into the original main plate—the Calibre Royal.
Every watchmaker will tell you the same thing —to design and create a calibre that is produced only in a few hundred pieces is one thing, but to produce it on an industrial scale is quite another. Pequignet’s accomplishment is so important because, in terms of innovative calibres, we have seen many over the last few years, but innovative calibres that could be produced on an industrial scale are few and far between.
For Pequignet to achieve its goal required the elaboration of 270 industrial plans, the creation of 120 stamps for just the gears, the machining of all the parts—some 300 realized according to Pequignet’s original plans out of a total of 302, with the other two being the palettes wheel and the palettes made by Nivarox, of the Swatch Group. This has certainly been a colossal effort carried out by a small team under the direction of Didier Leibundgut, who took over the French brand in 2004 with the firm intention of creating his “dream calibre”, as he likes to say, from scratch. 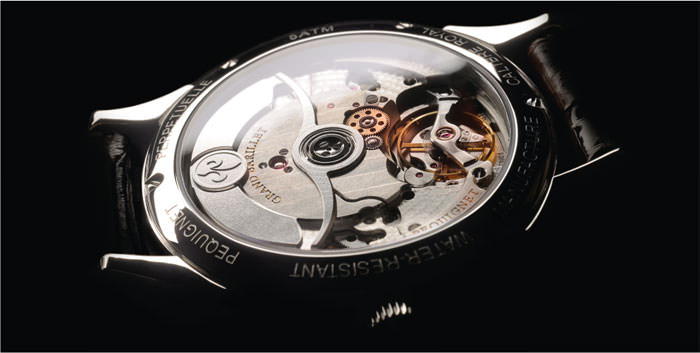 Overcoming a few central watchmaking problems
We will not return in any great detail here on the many technical aspects of this movement since you can find more information in the small table presented here or read our previous articles on the subject at: http://www.europastar.com/magazine/features/1003949671-pequignet-the-strength-of-a-dream.html
In passing, we will simply outline a few central points of this calibre that has been ticking for one year already and has fully demonstrated its exceptional reliability. This 13 ¾’’’ calibre, 31mm in diameter and 5.88mm in height, seems remarkably modest given its high degree of complexity. A large and precise lunar phase display has been integrated into its plate, as has an 88-hour power reserve indicator and a triple instantaneous jumping date and day in a double window. On top of all these remarkable additions, we must mention an integrated GMT that will come on board in 2012, then a tourbillon, followed by a column-wheel chronograph.
These developments have been made possible by the way the Calibre Royal has overcome a few central problems in timekeeping. The first one touches upon the relationship between the torque and wear and tear. The calibre is thus equipped with a system that, during the alternating stops and starts of the escapement, releases the inertial weight of the large barrel and its spring from the gear train. The calibre thus has not only a long working reserve but also the necessary torque for the addition of watch complications without premature wear and tear on the inner back of the watch.
The second problem involves the relationship between all the components in the space and reliability. By integrating all the complications on the main plate, plus the large 88-hour barrel, and forgoing any additional plates—often the source of problems in transmitting the force—the Calibre Royal, with its 5.88mm height, offers the ideal compromise between the amount of space needed and the reliability.
A third problem is the after-sales service, which has been greatly facilitated by the perfect alignment between the axis of the large barrel, the large bridge and the escapement. This allows the watchmaker to intervene separately as needed on the barrel, gear train, the large bridge or the escapement.

Industrial challenges
The industrialization of this very promising Calibre Royal, which took more than a year, required the considerable efforts of the three main managers involved in this project—the conceptor and watchmaker Ludovic Perez and Huy Van Tran and the head of the industrialization process, Philippe Blanchot. The best Swiss suppliers were part of this demanding industrial adventure (in this regard, and only as one example, the plate with its 88 holes, notably lateral, plus its 140 levels, realized by the specialist Precitram, is certainly one of the most complex they have ever done).
Everything in this movement was designed from scratch and the details of its mechanical operation have resulted in a number of remarkable innovations (among many others, the force of the date is spread over 24 hours to avoid the least loss of amplitude and a patented regulating system was developed to avoid all discrepancies in the date display indications).
Another rarity, the component parts of the movement were all made in stainless steel, including the shafts, sliding pinions and winding mechanism, among others, testifying to its high level of industrial prowess. 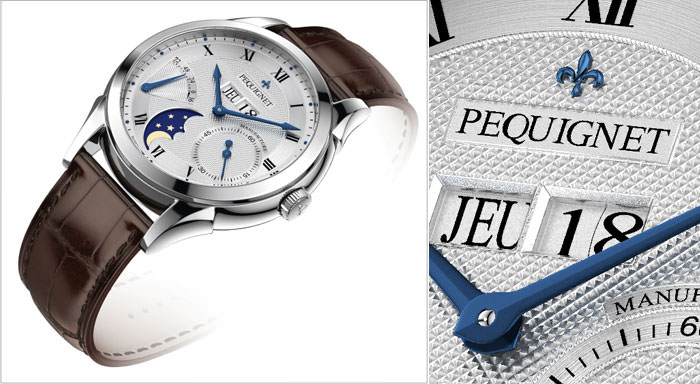 Birth of a manufacture
The design of the movement using sub-sections greatly facilitates its assembly. To ensure the assembly—and encasing—of the Calibre Royal, Pequignet is now operating in full swing. The current production rate is around 300 pieces per month, 3,000 per year, but its complete industrialization could theoretically allow a much higher rate for the French ‘manufacture’ (a name it now richly deserves).
An entire floor of the facility has been devoted to the new Calibre Royal. Employees have been hired and trained. New assembly rooms have been created that are luminous, spacious, well-lit and equipped with a sophisticated air filtering system. All are endowed with the latest equipment, large workbenches with their own individual vacuum and compressed air systems and the most sophisticated testing and measuring tools.

Superb collection
So what about the watches, you may ask? The cases of these elegant timepieces are up to the exceptional level of the movement. They are all very well finished: circular-graining, hand chamfering, hand-drawn strokes and Côtes de Genève design. The proportions of the case are perfectly designed and the dials have been the subject of particular care—gold appliqués and high-level treatments such as subtle snail patterns, fine guilloché designs or, on the more sporty models, black brushed with a depth that is rarely seen. With amazing readability, all the symmetrically and harmoniously placed indications have been given a large space.
Placed under the emblem of a stylized fleur de lys, that is found on the packaging and window displays, the Calibre Royal is divided into three families: Paris Royal, displaying hours, minutes, small seconds, date, day of the week and power reserve; Rue Royale, more classic, with a precision and integrated large lunar phases indicator (that can be placed horizontally or vertically); and the more sporty Moorea Royal Triomphe collection, with carbon fibre dial, mounted on black rubber.

One central question remains. What is the price of the Calibre Royal? The response will surprise more than one person. For a steel model, it is priced at €4,950. For those models whose dial is a bit more complex, they sell for €5,500, while the sporty Moorea timepieces are €6,500. In 18-carat gold, the Calibre Royal will cost €15,400.
Given all this, we can predict a brilliant future for this calibre that, we reiterate, is one of the most interesting on the market today. And, in a year or two, an integrated chronograph will certainly add to this remarkable family.