A first glance at Seiko’s 2012 collections


A first glance at Seiko’s 2012 collections

In its turn, Seiko has moved to the high frequencies that are, decidedly, one of the musts of the watch year (Zenith comes to mind, of course, but so do Montblanc, de Bethune and TAG Heuer, the champion of the high frequency in all categories—see our article in this issue).What is at stake in this race to the heights? Answer: Mechanical chronometry that one can pursue in many ways.

The path chosen by Seiko for its new Grand Seiko Special Edition Hi-beat 36,000 model—named for its frequency of 36,000 vibrations per hour—involves an automatic movement introduced in 2009. The principle innovations and improvements in this movement were the barrel spring made of the in-house alloy called Spron, new pallets and a new escape wheel. This provides more force and better efficiency of the balance thus affording greater chronometric stability, plus a remarkable power reserve of 55 hours. The master watchmakers at Seiko, grouped together in the premises of the Shizukuishi Watch Studio, have concentrated their efforts on this movement in order to improve its performance even more. Each watch has been entrusted to a watchmaker who selects and tests the most suitable balance spring and then meticulously adjusts the timepiece. This has resulted in a gain of delta of two seconds—the Grande Seiko Special Edition achieves a -2 to +4 seconds variation per day, compared to a variation per day of -3 to +5 seconds for the current model.Stylistically, the Grand Seiko is very classic with its well-designed 38-mm case in rose, yellow, or white gold, mounted on a crocodile leather bracelet with a gold tongued buckle. 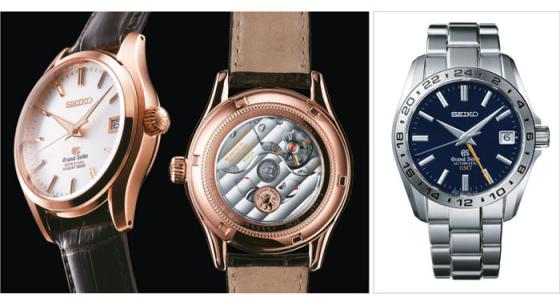 KumadoriIn the Ananta line, which draws from the codes and skills of Japanese artisanal traditions—the mastery of working in iron and steel as well as the secrets of lacquer—the new model is called Ananta ‘Kumadori’ Chronograph. The inspiration for this timepiece is both aesthetic and theatrical, since “Kumadori” is an extremely well-defined art form of make-up for the actors in traditional Kabuki theatre—a make-up that is very elaborate and dramatic, made up of strong lines and vibrant colours. We find these forms and colours—black and red—on the dials that have been individually hand-lacquered by Isshu Tamura, a master of the Kaga Makie style. On a background of intense black lacquer, the strong red lines that emphasise the counters are drawn and lacquered by a thin brush, forming an expressive relief effect. Driven by the well-known Calibre 8R28, a split-seconds chronograph featuring a column wheel and vertical clutch, the Ananta ‘Kumadori’ Chronograph comes in a blackened steel case, available in a limited series of only 800 numbered pieces. 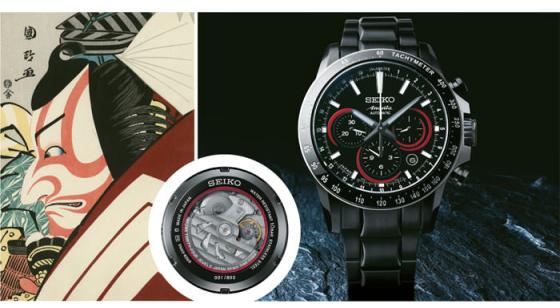 SporturaAs recent as it is, Seiko’s foray into the world of European soccer has been quite fruitful. The FC Barcelona team, of which Seiko is a watch partner, won almost everything in 2011—the Spanish national championship and the UEFA Champions League, plus a third Ballon d’Or awarded to one of its star players, the Argentine Lionel Messi. With hopes that 2012 will also be a good year for the club, Seiko has introduced a new model in its Sportura collection, the 2012 Sportura FC Barcelona Chronograph. This quartz chronograph offers high readability, easy manipulation on the wrist, and great comfort to the wearer, as well as a slightly retro appearance. Other new introductions in the same sporty line include the Sportura Aviation Chronograph, an attractive instrument drawing on a long history of aviator watches dating back to the 1970s, as well as a new collection of feminine sports timekeepers, among them a very nice chronograph that combines ceramic, diamonds, and mother-of-pearl. 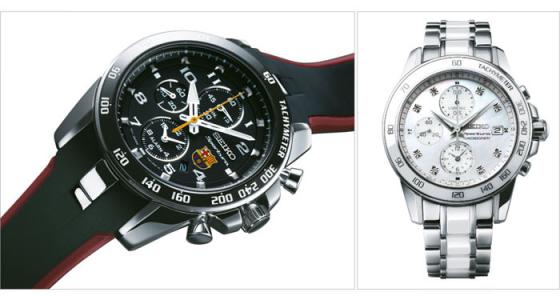