Between the years 1793 and 1795 Abraham-Louis Breguet fled Paris for Switzerland to avoid a particularly nasty period during the French Revolution known at the “Great Terror”. It was during his stay in Switzerland that Breguet devised his “subscription” watch, which customers could secure by paying a deposit.

Breguet’s aim was to get sufficient orders to be able to produce an affordable watch that nevertheless had a high level of quality and reliability. The relative simplicity of the movement’s design compared with Breguet’s other creations also meant that the watches could be serviced and repaired by any watchmaker. The subscription watch movement had a distinctive arrangement, with the barrel located in the centre and the going train arranged symmetrically. Like all other watches produced from the 16th to the 19th centuries it was also fitted with a fusee and chain transmission to ensure a constant force was delivered to the going train, regardless of the level of winding torque in the barrel. 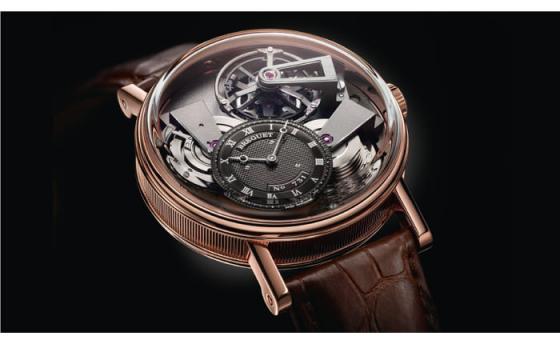 The fusee and chain’s elegantly simple design involves a chain (early examples used gut) winding around a spiral groove in the conical fusee. When the mainspring is fully wound, the chain is wrapped around the fusee from bottom to top and the reduced radius of the top of the cone reduces the torque acting on the barrel. As the mainspring unwinds, the chain moves towards the bottom of the fusee, with the increased radius increasing the torque on the barrel and therefore compensating for the reduced torque of the unwound mainspring.

Fusee and chain mechanisms proved themselves in pocket watches over a period of three hundred years but it was not until 1994 that the design was first incorporated into a wristwatch by A. Lange & Söhne. Breguet later incorporated the traditional technology into its Tradition line in 2010, with the platinum version of reference 7047, combining this nearly 500 year-old design with the brand’s pioneering advances in the use of silicon for watch components.

The latest incarnation of reference 7047, presented by Breguet at BaselWorld 2012, is the 18-carat rose-gold version using the Breguet calibre 569 with a silicon balance spring and escapement, as well as Breguet’s patented titanium balance. The off-centre dial at 7 o’clock in 18-carat gold, which has the traditional Breguet engine-turned decoration, is coated with a new black galvanic treatment. The 60-second tourbillon is visible opposite the dial in the 1 o’clock position, while the 50-hour power reserve can be read off Breguet’s patented power reserve indicator that is housed directly on the barrel drum and is connected to the barrel by a system of differential gears.

The rose-gold version of reference 7047 completes the materials available in the four references of the Tradition collection, which upholds the historical technologies of the company’s founder and continues his fervent quest for innovation.