“Tian Wang tells you the time” is a slogan that has been repeated thousands of times since 1990 just before the Central Chinese television news. You could say that everyone in China knows the brand. Now it’s our turn…

It may have sold a million watches last year, but Tian Wang remains a discreet, almost secret, brand without history or any discernible image. Its strengths lie elsewhere, in mastering its supply chain, from production to distribution. Without intermediaries, Tian Wang produces, assembles and sells all by itself. Europa Star visited the headquarters of the Tian Wang Watch Co, in Shenzhen, for a very instructive tour.

PositioningEuropa Star has already visited some of the big names in Chinese watchmaking. Sea-Gull is undoubtedly the biggest producer of self-winding movements in the world (4 million calibres per year) and its new factory in the industrial area of Tianjin is a match for that of Airbus, its neighbour. Fiyta is probably the most modern brand, since the “official timekeeper of the Chinese space programme” focuses hard on design and high-tech materials. But in China, one in every four watches sold bears the name Ebohr or Rossini, the most ambitious duo, helped by good production quality and a tentacular distribution network comprising 2,900 points of sale. These two brands are owned by the Hong Kong-based group China Haidian, which is also the most involved in Switzerland, having financed CodeX (2010) then later purchased Eterna and Porsche Design (2011). Nevertheless, the “Swissest” Chinese watch brand is undeniably the small Beijing Watch Factory, national pioneer of the tourbillon and enamel dials. The exception to the rule, its boss simply wants to produce manufacture watches that are almost custom made. And Tian Wang? Since 2008, it has doubled its sales, taking fourth place in the ranking of Chinese watch brands. 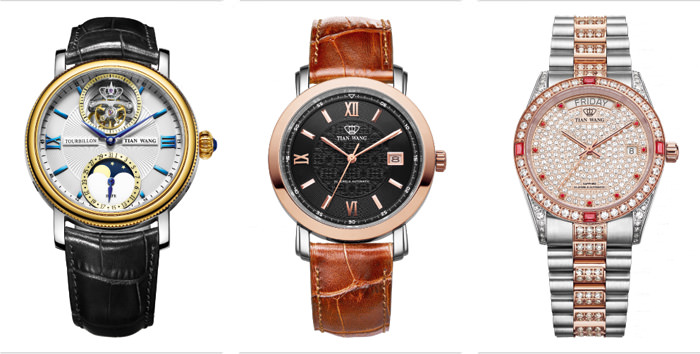 HistoryTian Wang means “emperor”—a name that indicates the company’s desire ultimately to become the number one in the Chinese market. “Note the logo in the shape of a crown,” says GuangLei Deng, marketing director and a member of the management team of the brand, which was established in 1988 in Shenzhen. But the origins of the company actually date back to 1980, when two entrepreneurs from Hong Kong created the Winning Metal Products Manufacturing Company Limited (WMP), specialised in the sale of watch movements and the distribution of well-known brands such as Seiko/Epson, Citizen/Miyota, Ricoh (Japan), Timex (USA), Ronda, ISA/Prestige Time and Swatch/ETA (Switzerland) and Epoch/Technotime (China/Switzerland). Opposite Hong Kong, on mainland China, a small fishing village called “深圳” (phonetically ShenZhen) is designated to become the first “Special Economic Zone” by Beijing. In other words, a capitalist paradise, formalising the new policy of “One country, two systems”. Never before in the industrial era had a city experienced such phenomenal growth over such a short period, rocketing from a few thousand villagers in 1979 to a megalopolis of 10.5 million inhabitants in the 2011 census. And this doesn’t even include the industrial suburbs…At the time, Chinese dreamed of having the “three that rotate”: a bicycle, a sewing machine and a watch. Hong Kong’s initial wariness slowly made way for an enthusiasm and its watchmaking component manufacturers invested en masse in OEM production in Shenzhen. Furthermore, although Hong Kong is the world’s biggest market for Swiss watchmaking products, Switzerland is also the biggest export market for watchmaking components from Hong Kong, in other words for components made in Shenzhen. It is in this context that Tian Wang was born, “established in the spirit of developing, over the long term, a genuine watchmaking brand,” Deng explains.

GrowthTwenty-four years later, Tian Wang has 1,200 of its own points of sale, mainly in the form of stands in shopping centres. “For 2012, we expect to sell 1.2 to 1.3 million watches,” adds the manager. The collection starts at 1,000 yuan (150 Swiss francs) and goes up to 10,000 yuan (1,500 Swiss francs) and Deng claims that the average price is 1,700 yuan (250 Swiss francs). But Mr Deng forgets the extremities because the tourbillon collection is priced at between 10,000 and 25,000 yuan (1,500 to 3,750 Swiss francs) and the entry-level models start at around 200 yuan (30 Swiss francs). Are Tian Wang’s customers different from others? Are they willing to pay a little extra for a national product with a patriotic fibre? “I don’t think so,” replies the manager, surprised by our question, “we are just meeting the customer’s needs in terms of service, style and culture.” The typical customer is a middle-class Chinese man, a white-collar worker or businessman, “because women are more fashion-oriented, which doesn’t really correspond with our style.” 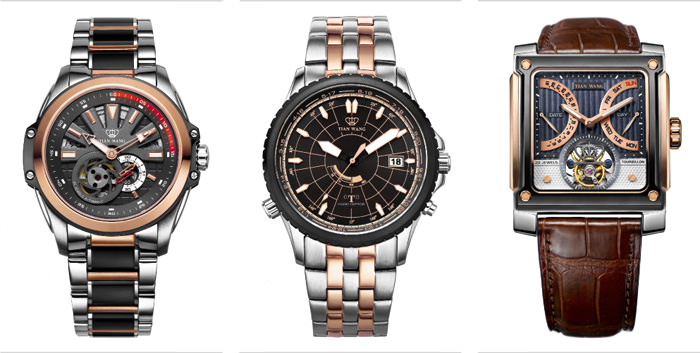 Made in JapanMore recently, following the initiative of other Chinese watch brands, Tian Wang has sensed an increasing interest for self-winding movements, to the detriment of quartz. “They now account for 45 per cent of our models,” confirms Deng. They are supplied by Citizen or Seiko, whereas the quartz movements are produced locally. As for the tourbillon, the manager refuses to reveal its origin to us: “This is a business secret!” An open secret, however, since we all know that it must be Chinese… Anyway, a Chinese tourbillon in a Chinese watch is coherent, so why not do the same with self-winding calibres, the production quality of which is increasing in China? This is not sufficient for Deng, “We don’t have enough experience at all the different levels: industrial planning, stimulating watchmaking talent, a pool of qualified personnel, high-quality training, the necessary tools and government support.” But the race for precision has already started: “As part of a cooperation agreement, we are fitting some models with Chinese movements that we are continually improving.”

The Swiss in their sightsLike the four or five other Chinese brands, Tian Wang fixed its objectives when it was founded: “Our Hong Kong boss at the time had a very clear vision of how the brand should develop and introduced the notion of ‘branding’ very early on,” Deng explains. The firm systematically reinvested a proportion of its profits in R&D and the brand image. “But you know, there is no rivalry among the Chinese brands, because we all have the same competitors—the Swiss brands who have extensive know-how and powerful marketing,” he insists.Tian Wang offers fourteen collections, each quite distinct from each other in terms of style and technology, from quartz to tourbillon via self-winding and radio-controlled. “The development of our country is leading to changes in taste towards more individualism. Our classic collections are now complemented by new, more daring ranges.”With such changes, is “The Emperor” preparing to conquer international markets? “We would like to, but we need to prepare for this scrupulously by asking ourselves one fundamental question: would foreigners accept our brand? To answer this we need to do some in-depth studies to find out how we would need to adapt,” our guide wisely concludes. 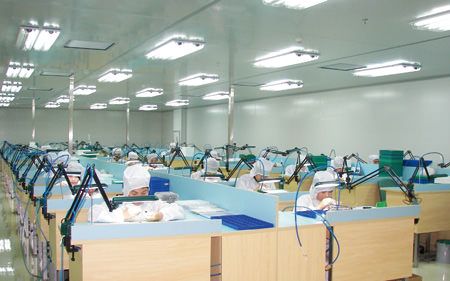 Tian Wang, from Hong Kong to Singapore via Switzerland!

Watch collecting is often synonymous with men; yet there is an array of female collectors actively involved in horology. This is the case of Lung Lung (...)

HIGHLIGHTS MING, which was recognised with the Revelation prize at last year’s GPHG, is a creative collective of six watch enthusiasts from around the world, under the (...)