For journalists, the fair starts with an entire day of listening to conferences. While the speakers may change each year, the theme is always the same: how to understand and reproduce the success of “Swiss Made”. Because what is the point of producing 771 million watches for an average price of 4.40 Swiss francs when you know that, in reality, all the companies are subsidised by the State in some form or other? Not to mention that half of this production (365 million) is fitted with imported movements! So, to become genuinely competitive on a global scale, Chinese brands are forced to go upmarket. But few of them make a genuine effort to do so, by investing in research and development and reviving the Chinese creative spirit.We believe there are only three brands with this potential: Sea-Gull, Fiyta and Beijing Watch Factory. But where are Ebohr and Rossini, two brands of the China Haidian group, the market leader? They are absent because of a dispute about their allotted space, “but they will be here in 2014,” the embarrassed organisers assure us. 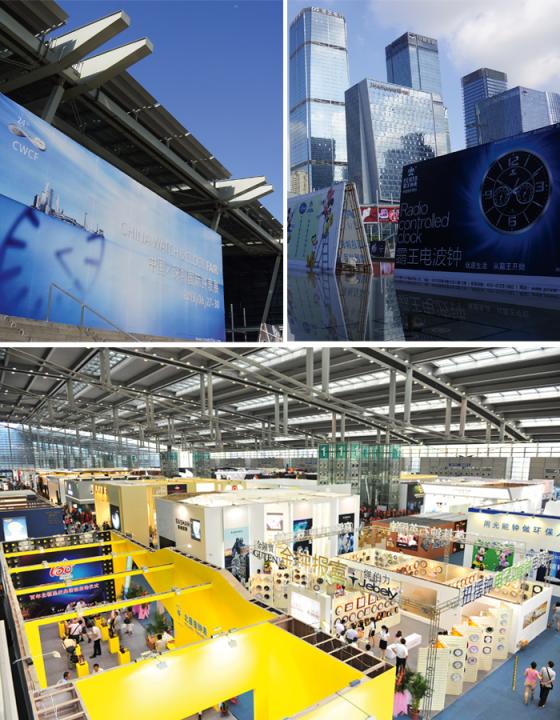 A BIT OF A JOKE

Walking through the aisles of the Shenzhen fair you risk spraining your jaw trying to pronounce the names of some of the brands, like “Runosd”, “Tierxda” or “Aeeme”. Or laughing at the rare presumptuousness of names such as “Starking”, “Van Gogh Watch”, “Berze, Castle of time”, “Royal Crown”, “Olympic Star”, “Princess Windsor” and “Elegangs”. A more subtle game for the 1,500 foreign visitors was guessing the real Chinese name of “Binli” (宾利 – the characters and pronunciation are identical to “Bentley”), “LeiNuo” (雷诺– Renault) and “Tophill” (陀翡利迩, pronounced “TuoFeiLiEr”, in other words “tourbillon”). This industrial parody does indeed represent the large majority of Chinese production, managed with an inflated ambition but an empty culture. An example? “Aha, you’ve never seen that in Switzerland?” the manager of Zhongshi Watch asks me as he shows me his wooden watches from the Bewell brand. When I told him that the idea was centuries old and that Tissot reinterpreted it on an industrial scale in 1988 with the Wood Watch, it was as if he had just discovered that the world was round… Things aren’t as jovial among the movement suppliers. Like Shanghai Watch Factory, Hangzhou Watch Factory produces tourbillons, and also like the former, its manager avoids the press like the plague, because he wants to keep the names of his customers secret. I bet that with a “Business” badge we would have been invited to drink tea with him! The coffee served at the Swiss Pavilion, on the other hand, is excellent. But Amarildo Pilo is disappointed that there are fewer exhibitors, which he believes is because of this year’s late BaselWorld and its relative success. “In Basel people were talking about a record year and triumph. Yes, but only for big groups, not for small brands! Some new exhibitors expressed an interest, but it was too late”. The organisers would like the Swiss Pavilion to become a show-window for Swiss culture in the broader sense. Maybe we will have some chocolate to go with the coffee in 2014!

Given that only 4.4 per cent of the 771 million Chinese watches have a mechanical movement, but that they represent 13 per cent of the value and that customers are asking for more of them, we can understand why Sea-Gull has completely abandoned quartz movements. The star on their stand was the pre-series ST8520 model, a “multi-axial” tourbillon, which can be seen at 9 o’clock behind its own domed bezel. The tourbillon, which performs one revolution in 60 seconds, is pivoted on a co-axial arbour that performs its revolution over one week. This in turn revolves around a third axis that rotates in 2 minutes 30 seconds. The 33.8mm diameter movement is 6.35mm thick and consists of 144 components. Operating at a frequency of 21,600 vibrations per hour, it has a power reserve of 55 hours.

Beijing Watch Factory (BWF) launched its second bi-axial tourbillon model at BaselWorld 2013, with a movement developed by the self-taught genius Xushu Ma, who is a member of the Academy of Independent Watchmakers. Unlike Sea-Gull and BWF, Fiyta is not a genuine manufacture because it uses Japanese, Swiss and Chinese tourbillon movements. It is, however, the most active in terms of design and marketing. 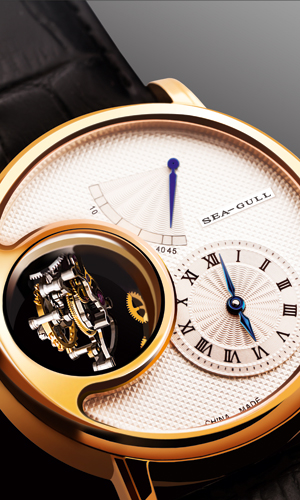 The proof is the model launched by the Shenzhen brand to celebrate the tenth anniversary of China’s first manned space mission, with a highly original silver dial that depicts the surface of the moon. Bruce Du, the company’s general manager, is enthusiastic: “It is limited to 100 pieces and we already sold 83 on the first day of the fair!” Our eyes are also drawn to a black and green model whose dial in two dimensions allows the time to be read with the hand on a steering wheel. “This is a prototype,” the boss points out.We conclude with an “old” brand for China (established in 1982), which we have never mentioned before: Tianba. Its magnificent ladies’ and gents’ models with cases in green jade finally honour Chinese culture. It’s almost a pity that its movement is Swiss…