It’s the end of June 2011 and one announcement rocks the small world of watch design and construction companies: La Fabrique du Temps has been bought by Louis Vuitton.

La Fabrique du Temps is essentially two men, Enrico Barbasini and Michel Navas, two of the best specialists in horological complications. They both went to the best schools: Gérald Genta, at its height, when the master designer was still at the helm, Patek Philippe, for many years, Audemars Piguet also, for Michel Navas, then Franck Muller for both of them. They cannot stop talking about their time in Genthod, where they worked alongside Michel Golay. At the time, Franck Muller was booming. Everything seemed possible and he wanted to produce more crazy complications, like the Crazy Hours, an idea that came off the cuff from Franck Muller himself, which they took on board and brought to fruition. 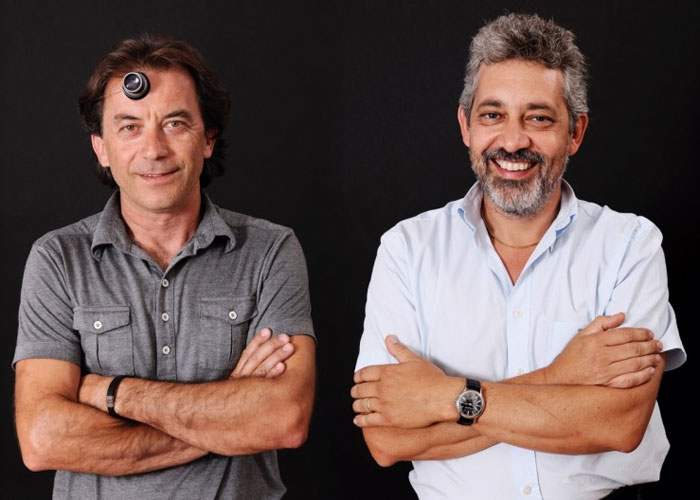 Working in their own workshop in Franck Muller’s chateau, they were able to give free reign to their mechanical dreams. But then the bickering between Franck Muller and Vartan Sirmakes started and the two men went looking elsewhere. They set up BNB with their colleague Mathias Buttet, but quickly distanced themselves from it. “We set up this company to work, not to make money,” they candidly explain. When the crisis came, like a great revealer, and this ambitious company, which was mismanaged and had grown too quickly, got into trouble and was engulfed in the storm, the two men were already gone. They set up independently, under the name La Fabrique du Temps, aiming to keep a modest size at all costs, “twelve people maximum”. But their excellence got the better of them. “Little by little, we were gobbled up by our customers and we grew big without looking for it; there were 18 of us and we had to employ two people for logistics… it was a bit too much for our liking.”

La Fabrique du Temps owes this success in particular to its close cooperation with Laurent Ferrier, another former Patek Philippe employee who had spent his entire career at the manufacture. On the eve of his retirement, Laurent Ferrier approached them: he wanted to produce a beautiful watch, in the old style, respecting absolutely the most classical watchmaking codes. Laurent Ferrier would look after the case, Barbasini and Navas the movement. The “beautiful watch” became the incredible success we know today. In next to no time, the watchmaking skills of Laurent Ferrier came to be appreciated by the most demanding collectors the world over, who saw in the brand one of the purest expressions of high watchmaking tradition. 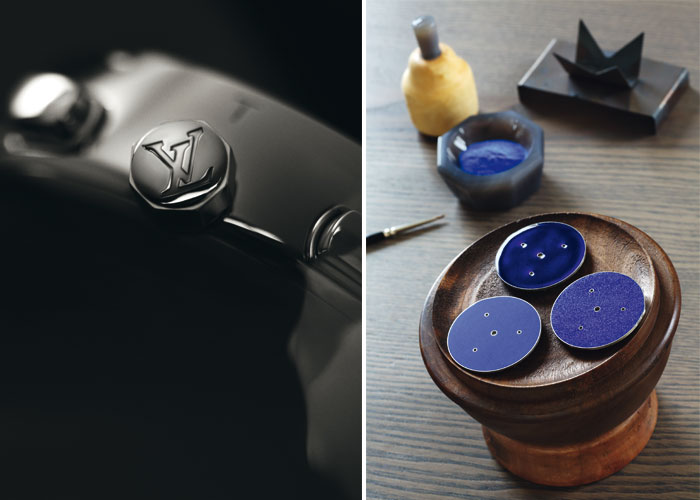 HAMDI CHATTI KNOCKS ON THE DOOR

He had just been put in charge of the watchmaking and jewellery arm of Louis Vuitton, and was looking to establish an authentic horological credibility for his brand, which he intended to place at the heart of high-end watchmaking. “It was actually the men who convinced us, Hamdi Chatti and José Fernandez, the director of operations based in Switzerland,” they explain frankly. “We like to work for genuine people and both of them were men from the field, who had worked at the bench and knew what they were talking about. And we found their project interesting.” 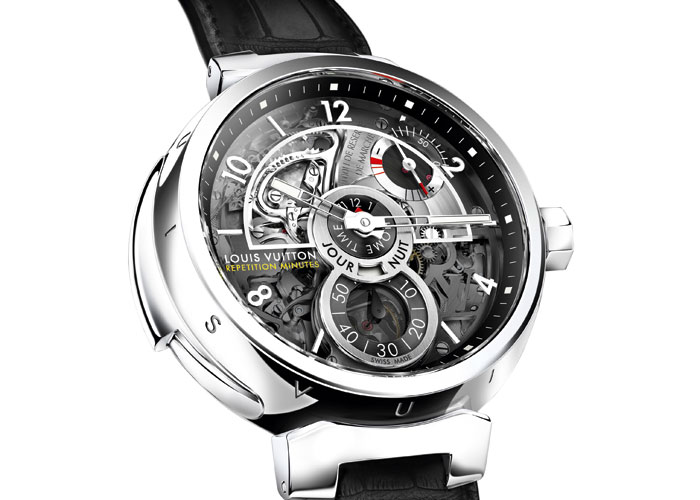 Louis Vuitton’s project? A project for a global watchmaking manufacture but one that would maintain a “human size of around 100 people when up and running”. Land had been secured in Geneva, a building was being constructed to bring together the Louis Vuitton watchmaking workshops from La Chaux-de-Fonds and La Fabrique du Temps. “But beyond this project for a manufacture, it was also the precise terms of the specific watchmaking project of Louis Vuitton that convinced us.” 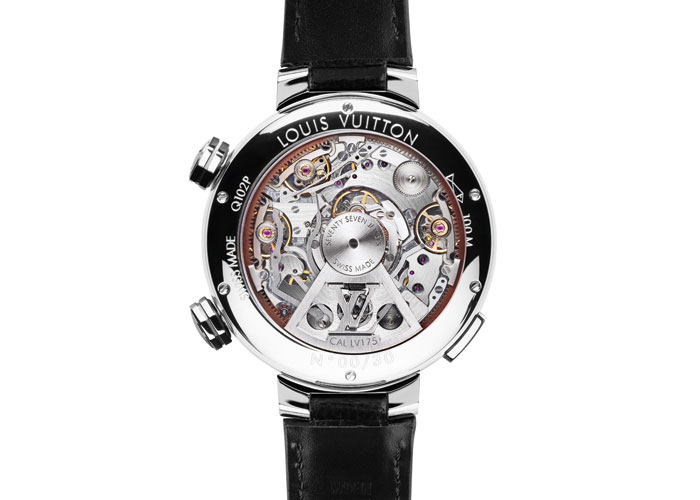 TAMBOUR TWIN CHRONO
A four-time single-push button: Although the LV175 Twin Chrono automatic movement is complex, its handling is easy thanks to the use of an innovative four-time single-push button at 7 o’clock which controls all the bi-chronograph functions. Press it a first time and the hands of the two chronograph counters at 4 and 7 o’clock start simultaneously. Press it a second time and the hands on the counter at 7 o’clock stop, while the hands on the counter at 12 o’clock start to move. Press it a third time and the time-count of the counters at 4 o’clock and 12 o’clock stops. Press it a fourth time and all the counters reset. A three-level column wheel: The LV175 Twin Chrono self-winding manufacture calibre is composed of 437 components, two of which play an essential role: the column wheels. The first wheel ensures the control of the minute hand and has a classic design. The second column wheel has a completely unique shape. Situated on the bridge side, it has three different levels which are used to start and stop each motor and to control the seconds-hand reset hammers.

There were two clear themes: sailing and travel. It was up to the watchmakers to think up new expressions and new complications based around these central themes. “What we want to do above all is pure watchmaking, totally legitimate, completely mastered. Our long-term aim is to produce pieces stamped with the Geneva Hallmark.” They give three examples that are emblematic of their research for Louis Vuitton: a minute-repeater designed and produced entirely in-house, the very interesting Twin Chrono with its four regulating organs and a ladies’ tourbillon with micro rotor.

Taking a closer look at these timepieces, we discover the entire poetic fantasy of the two men, allied with their great horological rigour. The Tambour Répétition Minutes? An idea as “simple” as it is poetic sets it apart from other minute-repeaters on the market: it doesn’t repeat the time – what’s the point, since you can read it? – but instead signals a second time zone, or home time, which reminds the traveller nostalgically of the time back home. The Tambour Twin Chrono? Possibly the most beautiful chronograph. Ultra readable with its three large counters, its main application is meant to be at sailing regattas, since it allows two elapsed times to be calculated simultaneously, as well as the difference between the two, which is clearly readable on the upper counter. Technically speaking, four independent engines linked by a differential power this piece. But, above and beyond its specific function, this very particular and highly readable chronograph will undoubtedly win over customers who will use it to time anything but a regatta. 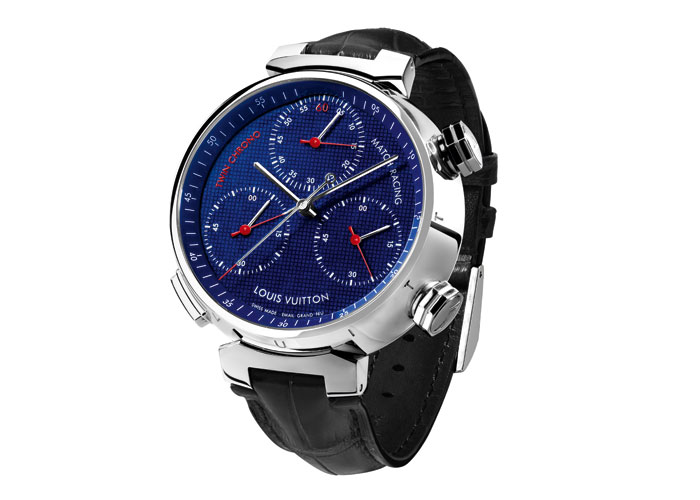 TAMBOUR TWIN CHRONO
Grand feu enamel dial: Designed by Léman Cadrans and hand-made by a master enameller, the Tambour Twin Chrono dial is composed of a white gold plate with a subtle guilloché, covered by a deep blue grand feu enamel that is sufficiently translucent to reveal the pattern.

One of their great successes is also the Spin Time Regatta, a very innovative watch whose countdown timer uses small coloured blocks that rotate on their own axis for its display. This complex mechanism was developed on an ETA 7750 base. Which begs the inevitable question: Will Louis Vuitton develop its own base calibre? The two friends hope so but it’s not their decision to make: “It would have to be done for the entire LVMH group, since in order to produce a base calibre with a realistic price, around CHF 200 rather than CHF 500, you need a huge industrial scale. It would be a key initiative.” As they wait for this hypothetical decision, what interests the two watchmakers the most is the “challenge of building up a purely horological brand. But the lines are moving and the arrival of Michael Burke at the head of Louis Vuitton is very positive, we sense a great willingness to develop the brand’s watchmaking arm. And Louis Vuitton also bought Léman Cadrans; in this particular area there is plenty of potential, in particular thanks to new technologies such as lasers etc....”. 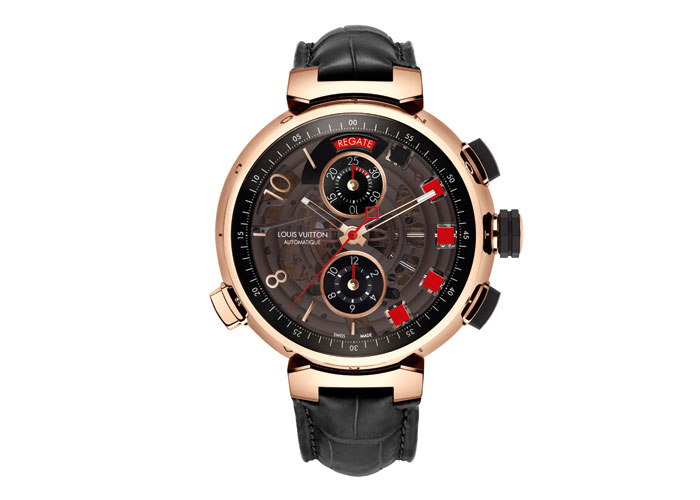 TAMBOUR SPIN TIME REGATTA
In 2010, Louis Vuitton presented an innovative way to display the time with the Tambour Spin Time collection. Its secret: the hours were displayed by the simultaneous rotation of cubes showing either a blank or numbered face. Capitalising on the Spin Time calibre, Louis Vuitton offers a new model specifically for regattas: the Tambour Spin Time Regatta. On the side of the case, a red pusher at 8 o’clock controls the regatta complication. Press on this pusher and the indication “Chrono” in the window at 12 o’clock changes to “Regatta”. At the same time, the chronograph counter rotates forwards by five minutes. In this way, the minutes remaining before the start of the regatta are taken into account in the display of the elapsed time. As if by magic, the five cubes displaying the elapsed time rotate to reveal a red colour that contrasts with the blue background. Easy to use and very intuitive, this unusual high-end complication developed by the watchmakers at Louis Vuitton allows skippers to see at a glance the time remaining before crossing the starting line during the five minutes before the start of the race.

So what about the future? They smile: “Yes, in our heads and in our boxes, we are a few years ahead... it will still be based around travel... for example, a ladies’ piece that is very poetic and very Louis Vuitton, with a special display... But we want to take our time. The most interesting direction in our opinion is simplicity… and reliability! You cannot build up a genuine legitimacy with just two movements in a short space of time. But we also have an enormous advantage: the commercial power of Louis Vuitton!”. Not bad for two horological dreamers, whose immense good taste gives them discretion and the pure pleasure of working at the top of their art.

At lunch with… Romain Gauthier