Time for change in Moscow


The 2003 Moscow Clock & Watch Salon offered a comprehensive overview of the Russian system of buying, selling and distributing watches. The Salon is a particularly friendly environment in which to do business, but it clearly needs the participation of the leading Swiss brands to add a little more glamour to the event and change the Russian consumer's predilection for the ultra-classical watch.

Time for change in Moscow 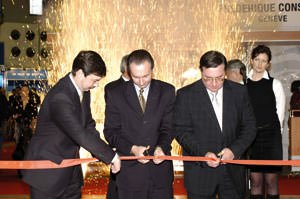 The 2003 Moscow Clock & Watch Salon offered a comprehensive overview of the Russian system of buying, selling and distributing watches. The Salon is a particularly friendly environment in which to do business, but it clearly needs the participation of the leading Swiss brands to add a little more glamour to the event and change the Russian consumer's predilection for the ultra-classical watch.

One cannot help but be a little surprised on visiting the Moscow Clock and Watch Salon. On entering the well-lit hall one is confronted with the familiar sight of busy and functional stands, the hubbub of business discussions and the red carpeting along the aisles. Naturally, almost everyone is talking in Russian and the signs are more often than not in Cyrillic, but then you suddenly realize that there is something odd about the presentation on the stands ... with a handful of exceptions, each exhibitor offers a selection of brands.
For someone used to ambling through kilo-metres of 'one brand only' stands at BaselWorld, it is something of a cultural shock to find, for example, Appella watches on four different stands that belong to four different distributors, two of whom were only separated by the width of an aisle. And seemingly they are all vying for the same clients.
Another odd visual encounter was seeing a Swiss distributing company called Chronolux, which has offices in Moscow, exhibiting such diverse and competitive timepieces as cK Calvin Klein (Swatch Group), TAG Heuer (LVMH), Jaeger-LeCoultre (Richemont Group) and Hermès (independent). In addition, Chronolux also represents the Swiss Watch Federation there.
But that's the current name of the game in Russia.

The Russian way
The official figure for watch sales in Russia for 2002 is 26 million. The sales potential within the country is enormous, however at present, salaries don't permit the average consumer to be extravagant with their luxury spending. In Moscow, which has around 12 million residents and a daily population of around 17 million, people are considered to be reasonably well paid, the average wage being around US$ 300 a month. Move out to the sticks and the salary may be as low as two to two and a half times less.
Ultra-conservative tastes also play an important role. The Russians are entrenched in an horological time warp whereby the only watches that sell in quantity are the very classical mechanical watches with a simple dial that shows hours, minutes and possibly seconds - mechanical movements account for something like 85% of sales. Because of price, the most popular brands are Russian - Poljot, Chaika, Volga and Vostok.
But tastes are slowly changing as more of the imported brands appear in the retail outlets and on the wrists of prime time and sports personalities. But the situation would change even faster if the important Swiss brands actually participated in the Moscow Salon instead of relying entirely on the participation of multi-brand distributors.
Having said that, the Russian system, whereby a distributor also has a watch wholesale business and, quite often, his own retail stores, seems to be the norm.
But clearly the vast potential of the Russian market has not yet be tapped. The Moscow Salon is certainly trying to change that, but it needs some impetus, some additional eye-catching participation from the foreign manufacturers.

The organizer's view
“Our Fair is THE marketing and economical event for our exhibitors,” explains Igor L. Prudnikov, President of Rosinex, the organization behind the Salon. “Today, we have an open watch market, which means that the industry's policy is not as affected as in other areas - as, for example, the pharmaceutical industry. For exhibitors it is the real chance to promote their products to both the Russians and the nearby states.
”There is no professional organization for the watch industry in Russia, but our Salon highlights all the advantages of the industry. Our main objective is to bring together the Russian manufacturers and have them participate alongside overseas manufacturers.
At our first Salon in 1999, the Fédération Horlogère Suisse (FHS) participated along with a small group of Swiss brands. But they stopped participating. I'm sure they had their reasons, maybe the brands found a distributor or perhaps their target was different.
“Initially, the Salon was only for professionals, the main aim being to help develop the manufacturers' contact with the retail chains. But we decided to try and bring everyone together in order to present and promote the watch industry to both the professionals and the public. Now we have the public coming to see the watches and for this, our fifth Salon, we had six different TV channels covering the official opening.”

And the Swiss?
The question of why only three Swiss manufacturers (RSW- Rama, Alexis Garin and Jovial) were actually participating was immediately broached.
“Naturally, we would like to see more Swiss manufacturers exhibiting in Moscow. They could participate at whatever level they want, with their distributors, with their own stand or even purely for promotional purposes, whatever suits them. But of course, they have to decide about their main targets. Most of the Swiss companies want to position their brands at a high level in the eyes of the public. The Swatch Group, for example, doesn't want to share a stand in the manner of the distributors who have several brands on show. But we are going to enlarge the Moscow Salon by opening a second level in the hall. Their participation is now open to discussion and obviously we would like to be able to co-operate with them.
”An important factor in Russia worth noting is that there is no competition between the Russian and Swiss manufacturers because their products are on completely different price levels. Consequently, there is no 'political' competition. We at the Salon want to present the Swiss companies to both the professionals and the public more widely."

Focus on design
“Next year, in an effort to change the Russian approach to design, we are going to organize a competition for both designers and watch companies,” Prudnikov continues. “The problem we face is that the Russian manufacturers don't really need to change their approach since almost all of their production is sold in Russia. But we are trying to change their manner of thinking and over the five years of the Salon, Russian watches have taken on a slightly more modern look.”
Out of interest, it is interesting to note that during the old Soviet Union system, 50% of Russian made watches were for national use and 50% were exported. Today that has dramatically lowered to somewhere between 5 and 10% of exports. A pity because apart from the novelty value of owning a Russian watch with a mechanical movement, the price/value ratio is particularly interesting.

Conclusion
From an observer's point of view, the Moscow Salon is doing a remarkable job of promoting watches to both retailers and consumers. The sighting of BaselWorld's supremo, René Kamm, making a tour of the Salon (and his first ever trip to Moscow) with Igor Prudnikov and Lena Akindeva, the Salon's Project Manager, also indicates the esteem in which he personally holds the Salon.
For those readers interested in statistics, the Salon has grown from 715 m2 five years ago to 2,500 m2 this year and from 62 to 163 exhibitors, 118 of whom were Russian nationals with 45 from abroad - Hong Kong, Korea, Switzerland etc. There were 14,600 visitors - 13,900 Russians and 700 foreigners - and business appeared to be brisk.
The prospective for developing watch sales in Russia is enormous and non-Russian companies really should be thinking about investing in the development and promotion of their brands at this event in order to be in on the ground floor on what is potentially a vast, burgeoning market.
As the saying goes ... the future is now!

In the next edition of Europa Star (1/2004) there will be a 'Special Russia' section in which we take a look at the Russian manufacturers, analyse the wholesale, distribution and retail systems, and see just who the major players are in this potentially lucrative market.