Is the tide turning in global football sponsorship? After Bulova replaced Hublot as the official timekeeper of Manchester United, it is now the turn of Rotary to surprise us with the announcement that it has become the first official timekeeper of another major Premier League team: Chelsea FC. The family-owned Swiss Made brand which is very big in the UK has signed an exclusive four-year sponsorship deal as the ‘‘Global Official Timekeeper of Chelsea FC”.

Like Chelsea FC, Rotary has over 100 years of tradition and an international following. The watch brand claims a reputation for “affordable” watches, which is what signals the change in direction in the big-money world of Premier League football sponsorships. Although luxury brand Hublot pioneered in this area and remains very active in football sponsorship, it has now shifted the focus of its attention on the luxury capital of Paris, signing up with Paris Saint-Germain within weeks of the Bulova announcement. After Bulova, Rotary’s new partnership with Chelsea FC creates a dichotomy within the English league that sees the affordable brands at one end of the spectrum sharing similar platforms with ultra high-end products such as those of Richard Mille (official watch of Manchester City) at the other. 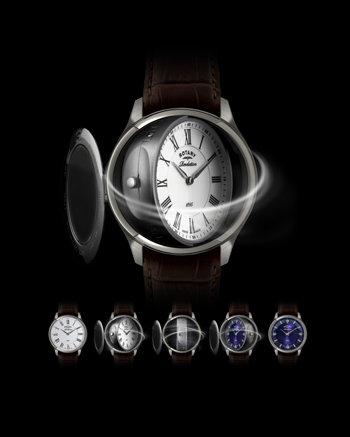 But Rotary’s success as a household brand name and a global reach that extends beyond the UK to over 40 other countries including Hong Kong, China, India, Indonesia, Singapore, the Middle East, Europe, North America and Canada, makes the partnership all the more interesting for the brand, as CEO Victoria Campbell explains: “This is an extremely exciting sponsorship for Rotary and one that we are very proud of. Like us, Chelsea enjoys a long-standing heritage and operates on the world stage. Our partnership represents a mutually beneficial strategic alliance given that we share many common values. We are committed to growing our brand awareness overseas particularly in South East Asia and Chelsea was our first choice given that their fan base in the region is huge.”

As Global Official Timekeeper Partner of Chelsea FC, Rotary branding will be prominent within the Club’s ground at Stamford Bridge. In addition to this, Chelsea’s star midfielder Frank Lampard will become the Chelsea Football Club Rotary brand ambassador for 2013-14. The global partnership will also spawn two exclusively designed ‘Special Edition’ watches, which will soon be revealed on a dedicated website.

Ron Gourlay, Chelsea FC Chief Executive, said, “We have never partnered with a watch company until now but believe Rotary are a perfect fit as we share a similar outlook and goals. We are very pleased to be joining forces with a Swiss fourth generation family-owned watch brand which has a worldwide name. I am happy to announce that Frank Lampard will become the Chelsea Football Club Rotary brand ambassador for the 2013-14 season and we look forward to building a great relationship with them.”