LVMH Moët Hennessy Louis Vuitton, recorded a 4% increase in revenue to reach €21.4 billion for the first nine months of 2014. Organic revenue also grew by 4% compared to the same period in 2013. All business groups grew except Wines & Spirits which continues to be affected by destocking by distributors in China.

With organic revenue growth of 4% in the third quarter, the trend remains comparable to that recorded in the first half of the year. An improved growth rate in Europe and the United States during the quarter compensated for the slowdown observed in Asia. 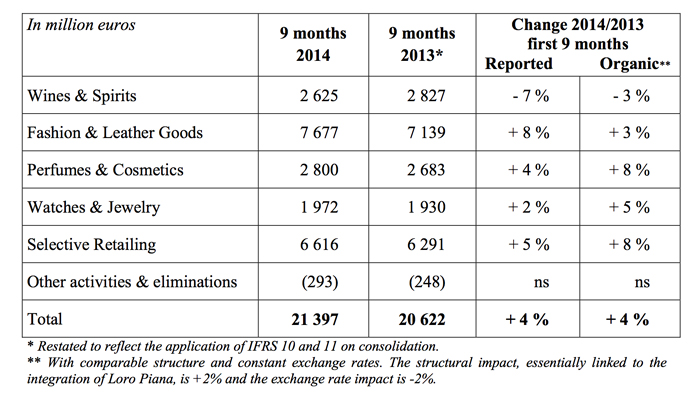 The Watches & Jewellery business group recorded organic revenue growth of 5% for the first nine months of 2014. The third quarter showed a notable acceleration in the jewellery segment, driven notably by Bulgari, while watches continued to be impacted by the cautious purchasing behaviour of multi-brand retailers in an uncertain economic environment. The launch of the new watch for women Lvcea by Bulgari and the success of Hublot’s iconic lines were the key highlights of the quarter.

Outlook In an uncertain economic and financial environment, LVMH will continue its strategy focused on innovation and targeted geographic expansion in the most promising markets. LVMH will rely on the power of its brands and the talent of its teams to further extend its global leadership in the luxury market in 2014.

During the quarter and to-date, no events or changes have occurred which could significantly modify the Group’s financial structure. The distribution of Hermès shares in the form of a dividend announced on 3 September 2014 will be the subject of a separate press release. 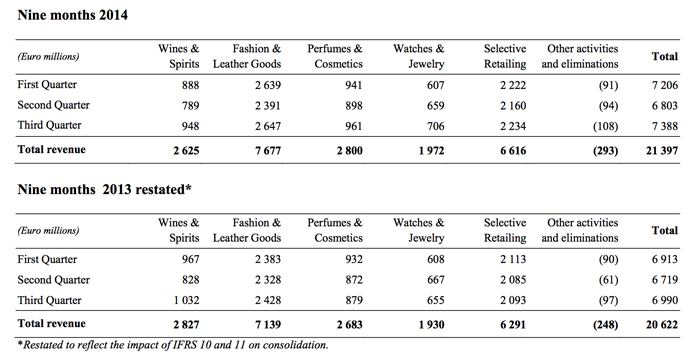 Revenue by Business Group and by Quarter