Before we start analysing the current situation, let’s cast our eyes back. Because, although the watchmaking business is all about time, it often has a short memory. We only have to go back about fifteen years to find the source of the problems that the watchmaking industry is facing today.

Before we start analysing the current situation, let’s cast our eyes back. Because, although the watchmaking business is all about time, it often has a short memory. We only have to go back about fifteen years to find the source of the problems that the watchmaking industry is facing today.

As Denis Asch explains (see “I wanted to sell watches,not prices”), attitudes towards purchasing a watch have changed considerably in 15 years.

In the early 2000s, Richard Mille (2001) and Greubel Forsey (2004) watches began their steady climb to the top. Back then, Richard Mille offered watches in a totally different style from the norm; in particular, he introduced research into new materials and innovative architecture, while the more neo-classical Greubel Forsey sought to take chronometric research and decorative excellence to new levels.

Rave reviews and successful sales, at often very high prices (which, in their case, were justified by their rarity), gave rise to numerous emulators. Among them were authentic, original approaches to quality watchmaking, but also numerous opportunist launches based essentially on price, the product being of almost secondary importance as long as it conformed to the latest fashion, as if the watch was the packaging for the price.

The large groups did not remain impassive as the fever rose, and they too began offering more and more extravagant products – talking pieces aimed first and foremost at generating buzz and showing how modern they were, like trees hiding the more financially rewarding wood. It was against this backdrop of technical, mechanical and stylistic inflation that prices quite naturally soared. Even the most banal watches muscled up in a testosterone-fuelled market ambience, baring their mechanical entrails more and more, as if trying to physically justify their swelling prices.

This inflation – and success – is corroborated by the Swiss export statistics for timepieces with an export price of CHF 3,000 and over (see graph). 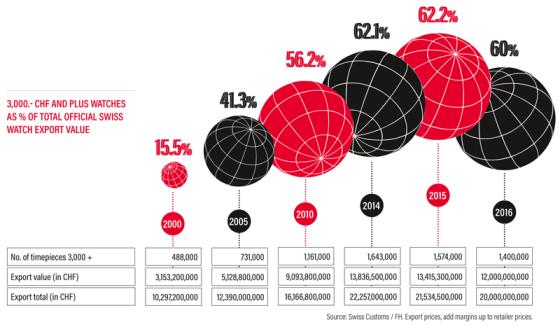 The figures are unequivocal: the share in value of the highest- end watches rose from a modest 15.5% in 2000 to peak at 62% in 2014 and 2015. Whereas over the same period, the total number of timepieces exported remained virtually stable, or even fell back slightly, from just over 29 million in 2000 to 28 million in 2015. In other words, watch prices underwent a virtually meteoric rise and the Swiss watch industry got high (and, consequently, dependent) on luxury.

While this situation was manna from heaven for watchmakers, it also paved the way for the current slump. The watch industry gradually retreated to the summits, producing fewer and fewer timepieces, but more and more costly ones – witness timepieces with an export price of under CHF 200: they represented almost half of the total value of exports in 2000 against only one-tenth in 2015.

The price issue is indeed at the heart of the current delicate situation.