We are not going to trot out the figures for China and Hong Kong, who are often accused of being the root cause of the current crisis.

We are not going to trot out the figures for China and Hong Kong, who are often accused of being the root cause of the current crisis.
I

t is true that the Swiss watchmaking industry has become extremely Sino-dependent, and the political decision by one single man, Xi Jinping, and the change of gear by one regime have been enough to disrupt the entire ecosystem.

But the downward trend set in motion during the past two years (China, combined with the other international tensions) is, objectively, not of the same nature as the financial crisis which made itself felt from November 2008 to December 2009. After a brusque but relatively brief dive of up to 25%, lasting one year, Swiss exports suddenly rallied, climbing more than 10% as of January 2010, and up by more than 30% by March.

One of the keys to the current situation probably lies there – come 2010, things resumed their previous course. The Swiss watch industry seems not to have learned any lessons from what became known as the “subprime crisis”. The steep drop in Chinese demand (or the sudden brake applied to supply, to be more precise) heralded quite a different crisis which, combined with other factors, made it a turning point: a price crisis, or rather a crisis fuelled by price issues, but also an identity crisis. 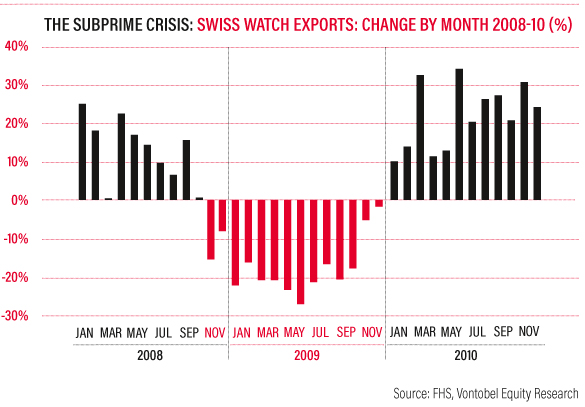 Whereas in 2010, watchmakers thought they could carry on as before and once again aim for the sky, things are very different in 2017.

In China, it all began mainly for reasons of domestic policy and Xi Jinping’s takeover of the apparat. And in the context of a general slowdown in Chinese economic growth, there was also a need to reassure the huge, emerging middle class with guarantees of integrity, firmness and opposition to endemic corruption. The anti-corruption campaign, as it has been called, is first and foremost a spectacular staging of this political ambition. And what could be more symbolic than targeting the “watch of corruption”, worn so proudly and ostentatiously, like a miniature portable safe, on the wrist of the powerful, semi-powerful and even mid-level civil servant?

But quite apart from its political role – the visible face of this campaign – the economic aspect materialised almost simultaneously, with the issuing of import restrictions aimed at Chinese tourists. No more returning from world tours with armfuls of gifts. No more wholesale distribution of business gifts brought back from Hong Kong!

And, as Bulgari CEO Jean Christophe Babin ironically comments: “You’re more generous when it’s not your money you’re buying with. When Business Class is no longer available, you’re more careful.” 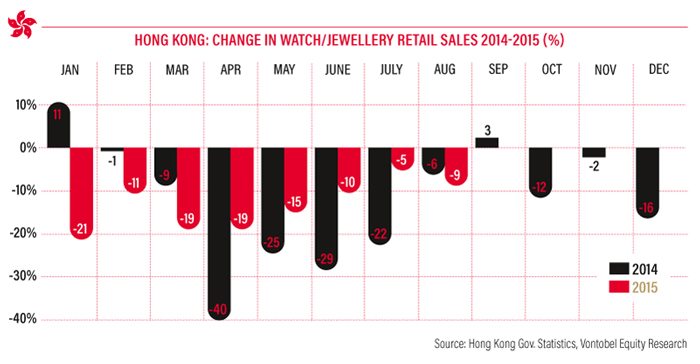 “In the last few years, Asia and especially Greater China have been the main growth drivers for the Swiss watch industry. In 2005, Greater China accounted for 19% of total exports and in 2012 its share had risen to 32%. In 2013 and 2014, exports to China declined somewhat, bringing Greater China share down to 27%.” Vontobel Luxury Goods Shop report 09-10-2015

In response to the fall in exports, the world’s factory is having to change and focus on home demand. Hundreds of millions of Chinese have been ordered to buy Chinese products, in China. In launching his anti-extravagance and anti-corruption campaign and putting the brakes on foreign purchases, Xi Jinping flicked over the first domino. The second fell on Hong Kong then, from hub to hub, the dominos fell as far as Paris, Lucerne and Interlaken.

IN MARCH 2015, JULIE LAULUSA, AN ASTUTE AND KNOWLEDGEABLE EXECUTIVE FROM THE MAZARS CONSULTING GROUP, DETAILED TO EUROPA STAR:

“The anti-extravagance and anti-corruption campaign began to have an impact on sales in mid-2012, although at that point the effects were relatively mild. In 2013 things began to snowball, with the result that sales fell sharply, by around 30-40%. That year, sales of high-end watches were estimated at $653 million, the same figure as 2004! This was no coincidence: the luxury watch, a discreet and yet greatly appreciated gift, had become a symbol of corruption. Bloggers and contributors to internet forums, in publicising the campaign, accentuated the impact even further”. (EUROPA STAR, MARCH 2015)

HAS THE “ANTI-EXTRAVAGANCE” CAMPAIGN PLAYED A ROLE IN THE STYLISTIC EVOLUTION OF SWISS WATCHES?

Julie Laulusa: “The anti-extravagance campaign, the moral prong of the anti-corruption campaign, followed a similar pattern. The watches that came in to replace the old stock were different; stylistically, they had no visible signs of extravagance. To give an example of how anti-extravagance was implemented in practice, in 2013, Louis Vuitton was forced by the Shanghai authorities to withdraw the oversized trunks on display outside its shop. In the view of the Chinese, a watch, and particularly a Swiss-made watch, should be made to last; you should be able to hand it down to the next generation. Engineering and functionality have increased in importance. As sales of watches intended as ‘gifts’ have dropped sharply, the customer profile has changed: clients are buying for themselves; they are investing, rather than spending. Little by little, the Chinese market is maturing”. (EUROPA STAR, MARCH 2015)

THE WATCH FILE The pandemic has led to the accelerated digitisation of our daily life. However, the watch industry finds itself still stuck at a stage similar to that of (...)