Europa Star had the good fortune of receiving Patrick Pruniaux, the new CEO of Ulysse Nardin and the man who contributed to successfully launch the Apple Watch.

Europa Star had the good fortune of receiving Patrick Pruniaux, the new CEO of Ulysse Nardin and the man who contributed to successfully launch the Apple Watch.
N

aturally, the conversation quickly turned to digital technology. With the qualified view that characterises the man who is probably the best-informed of any CEO in the entire watch industry in terms of new technologies, far from the radical ‘all-on-the-web’ propositions of certain brands... Perhaps it is necessary to go to Sicilon Valley, where our online future is being created, to take a qualified view!

Patrick Pruniaux began his career with the Diageo company for the Guinness brand before moving on to the Wines and Spirits division of LVMH and then branching off into watchmaking by joining TAG Heuer within the same group.

Four years ago, his departure to California to accompany the launch of the Apple Watch made waves, leading to the fear of a watchmaking ‘brain drain’ in the direction of the Silicon Valley giant. Those fears have now subsided. The return of Patrick Pruniaux to one of the most traditional brands of Swiss watchmaking – as the head of Ulysse Nardin – confirms both the ties between these two worlds and their fundamental differences... Encounter. 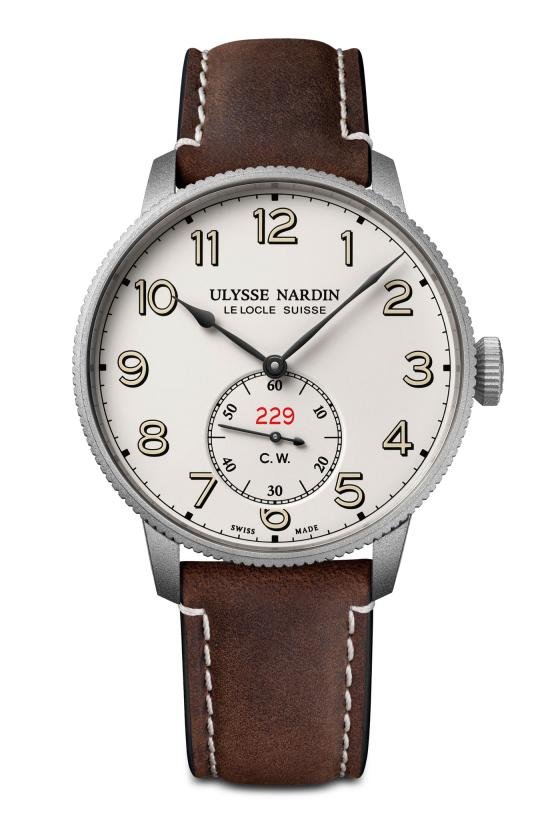 You are young, dynamic and very comfortable with new technologies, and yet you are at the head of a very old, venerable structure, to the point where we almost want to call you the ‘Macron of Swiss watchmaking.’.. To take the analogy a step further, do you consider that you represent a clean break with the past or rather continuity at Ulysse Nardin?

Probably a bit of both! To be perfectly honest, I experienced something rather rare in the case of a succession: a transition period of three weeks in the company of the former CEO, Patrick Hoffmann, and the former marketing director, Susanne Hurni. In a company, you have to get familiar with the figures, but also with the in-house culture. Even one week would have been a luxury, so three weeks...! Patrick Hofmann was very honest about the state of the company and the developments that he had in mind for it.

What is your analysis of the state of the company?

It is a company with incredible assets, an exceptional quality of manufacture, strong innovation abilities, and a strong human capital with a level of enthusiasm and passion that I have rarely encountered. Incidentally, it is similar to what I have seen at Apple. In principle, employees do not leave Apple. I might be the exception that con rms the rule! Now, it’s about rising to new challenges, and in particular accelerating the presence on certain key markets for Ulysse Nardin.

Your key market is historically Russia. Consequently – even before the considerable drop in the Chinese market that your colleagues have experienced over the last three years – you experienced a rapid inversion of growth in your own leading market, with the decline of the rouble and the geopolitical problems of the early 2010s in Eastern Europe... a kind of ‘pre-crisis’. How did Ulysse Nardin cope?

Clearly, the Russian crisis was hard-hi ing. And yet Ulysse Nardin showed a good level of resilience. We are fortunate to be a leading brand not only in Russia, but throughout the CIS and other geos, which includes several hundred million inhabitants. In the event of a crisis, the strength of the brand o ers be er resilience. We have good distribution in Moscow and throughout the countries of the CIS. 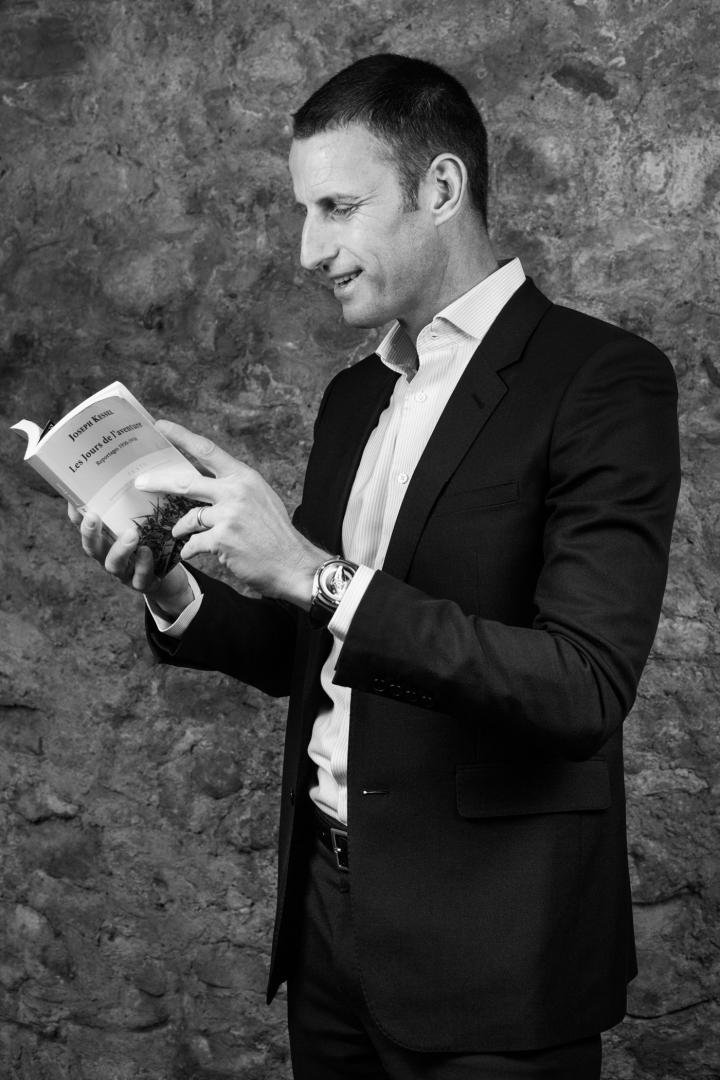 Patrick Pruniaux, Ulysse Nardin, photographed by Fabien Fabien Scotti at the Arcade Europa Star THE OBJECT:On Patrick Pruniaux’s wrist is the new Freak presented at the SIHH by Ulysse Nardin in 2018. In his hand is Joseph Kessel’s book Les Jours de l’aventure, a series of journalistic reports written between 1930 and 1936, from the Red Sea to the banks of the Rhine. “Journalists interest me more than novelists. His reports have retained their full power and pertinence. That is how you can recognise quality journalism: it lasts through time.” Kessel’s adventurous life inspires Patrick Pruniaux, reflecting values such as freedom, exploration, nature, the great outdoors... Themes that will probably reveal themselves throughout the year at Ulysse Nardin.

However, the need for diversification appears important for Ulysse Nardin. As does the need for a younger audience and brand image...

The brand is rather balanced in terms of prospects. I am, of course, very familiar with the strength of Ulysse Nardin in Russia, but it is more balanced than you might think in North and South America, Europe (including Russia) and Asia. However, there are markets in which we could be stronger. This is the case in the United States, as well as in China.

To do so, we must use all the channels available to us, in particular in China: from single-brand boutiques to multi-brand retailers to online sales. The entire watch industry remains very traditional in its distribution. But we can feel the beginnings of change. Today, the world might be talking about ‘digitalisation’, but I am not sure that that’s the right term. What is more important than anything else is direct involvement with the consumer. We can keep our intermediaries in place, but we must also speak directly to our clients as well.

E-commerce is the watchword at the moment, but online sales still only represent a very small part of total sales. Digital technology is especially used to build our reputation.

And maybe that’s all we’ll need! I firmly believe in craftsmanship, the quality of execution. That is what can make the difference, as I learned in my previous experiences. We can very well maintain traditional distribution channels while adding another channel – digital and e-commerce, even just dealing in small volumes – but in such a way that it will be an accelerator to boost the sales of traditional brands. 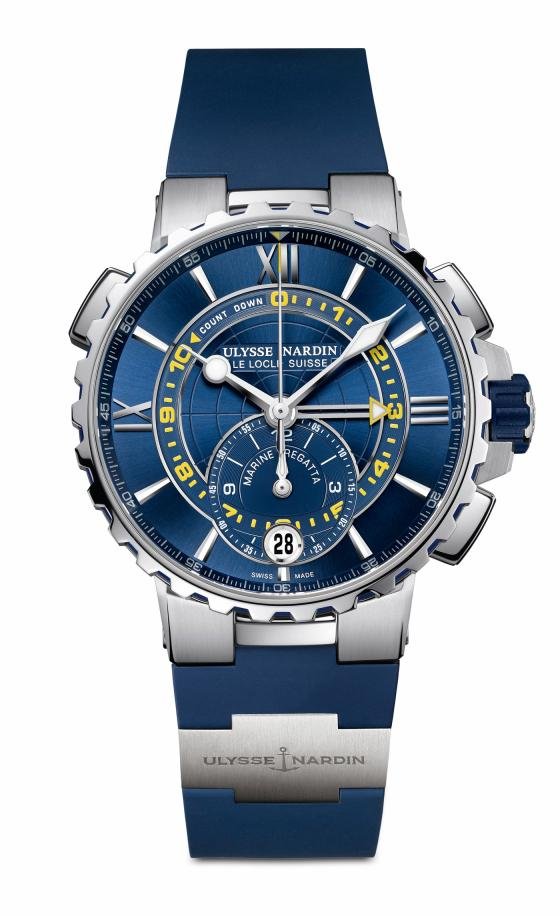 In reality, fresh back from California, I can tell you that the distinction that we make among the different channels – physical and virtual – is no longer pertinent. The only ones making that distinction anymore are in the watch industry. We cannot continue to oppose the two worlds. Look how you yourself shop: the question of the place where you purchase is becoming progressively secondary. You simply seek simplicity and immediacy as much as an outstanding consumer experience, whether on a website or at the boutique next door.

Still, purchasing a Ulysse Nardin watch is not on the same scale as reserving an online ticket for Barcelona on EasyJet!

But consumer behaviour has already begun to change. When a client enters a Ulysse Nardin boutique knowing more about a model than the sales representative, there is a good side – the client is familiar with our product – but there is also an uncertainty: are we offering a good in-store experience?

There is an enormous revolution that we need to lead for the sake of the entire watch industry. I always consider a consumer experience in terms of the amount that is spent. One of the worst client experiences that you can imagine is often the purchase of a luxury car. If you consider the ratio between the money that you are spending and the treatment that you receive, you’ll quickly realise how catastrophic it can be. On the other hand, you might step into a bookshop to buy a simple book, or into a store to purchase coffee pods, and you’ll be welcomed much more warmly, with a higher level of quality.

How can the in-store watch experience be improved, since the products are expensive and the expectations are high?

It can be done in a very modern way. A few years ago, someone told me that he doesn’t like entering luxury boutiques, since it is too intimidating. And he had the purchasing power! The dress code, the security, the sales staff... All are perceived as hurdles. So we need to work on that aspect: the ‘welcoming’ side of boutiques, including through training. 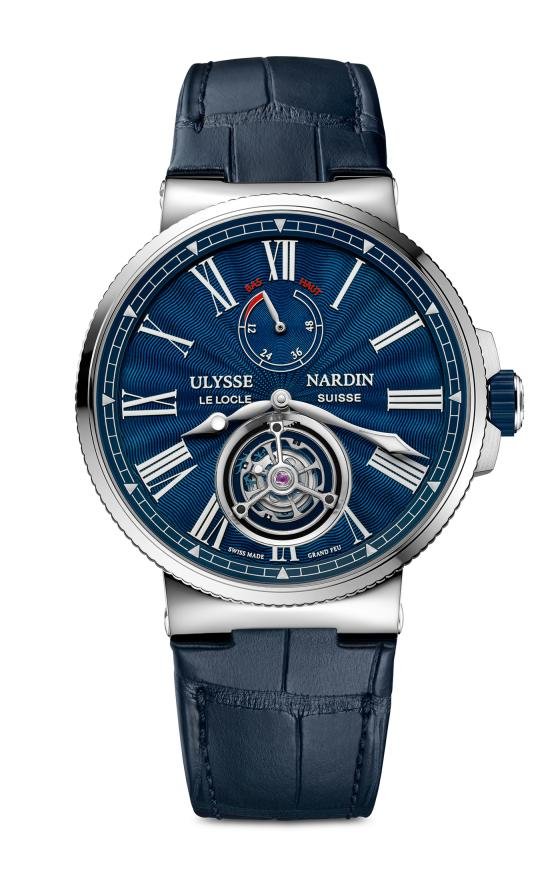 Your career illustrates both the resilience of traditional mechanical watchmaking that we have just evoked, and the breakthrough of the Apple Watch. What can you tell us about the adventure of the Apple Watch?

First of all, we’ve sold a lot of them. Connected watches are already a success, and this is only the beginning. If the CEO, Tom Cook, claims that Apple is today’s fore-most watch brand, I can tell you that he is very well-informed. The brand dominates a booming sector, and it is still in the learning phase. At the same time, I sense an increasing need for people to disconnect, and for that, too, this is only the beginning. That is why the themes of freedom and nature are very important, and that is what we would like to assert at Ulysse Nardin.

What about the integration of connectedness into the luxury watch? Is it possible to bring these two worlds together? After all, Apple did abandon its gold model...

I am very familiar with the eld, but for the time being, I do not see how connectedness would improve the value of a luxury watch. In any case, it would not correspond with Ulysse Nardin. You would have to be fast, since Apple has already gained ground in the connected watch eld. The question for traditional watchmakers is, rather, what am I offering my client, sincerely, to attract him or her to my product? I truly believe this, otherwise I would not have come back to Switzerland! However, the Swiss brands will not succeed simply by convincing themselves that the Apple Watch is not a success. It is be er to just admit it, and to see how Apple is converting millions of people to wearing watches.