2017 has been a challenging year for the Russian watch market. For the first nine months of the year, the value of imported watches increased by 5%, but that was achieved only through the mass segment.

2017 has been a challenging year for the Russian watch market. For the first nine months of the year, the value of imported watches increased by 5%, but that was achieved only through the mass segment.
T

he factors preventing market growth remain unchanged. Low income is the most important of these factors. From spring 2017, statistics have recorded some growth in retail turnover, mostly due to increased lending activities. Some markets, like the car market, for example, demonstrate fantastic growth figures. But not the watch market yet.

Another element standing in the way of luxury consumption is the government. Expensive items have often been purchased with cash, which is out of reach of taxation, as well as through gifts to officials. Tax rates remain the same, but the government is boosting its efforts to collect them and to control expenditure, which all helps to reduce the number of expensive purchases. Another major challenge for the watch market is the anti-corruption drive.

The major cause of the downturn is a change in consumption patterns. Ten or twenty years ago, customers bought watches to demonstrate their status. Nowadays, conspicuous consumption is being replaced by more discreet ‘old money’ behaviour patterns. All this is coupled with a decrease in watch advertising, which means no new watch buyers are being created.

Reliance on foreign tourists has failed; although the number of tourists from China continues to grow, they no longer buy expensive things. Instead, they have focused on affordable watches, often manufactured in Russia. In these circumstances, only the most powerful brands, and brands at the height of fashion, remain in demand. Most of the luxury brands are experiencing hard times right now. Many of them are courting lower-level retailers, something they would not have attempted a year or two ago. There is talk of the upcoming closure of several brand boutiques. 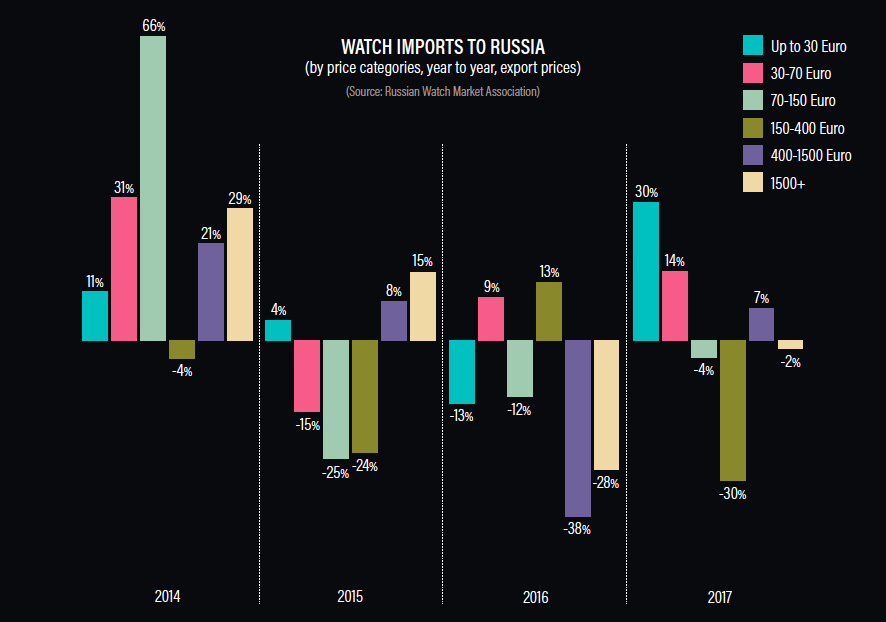 However, there are examples of interesting new projects. A Domino shop, located in a casino targeting tourists from China and South-East Asia, opened in Vladivostok this summer. Rich Time is successfully developing several independent luxury brands, and opened Louis Moinet, Carl F. Bucherer and HYT boutiques in Moscow this autumn.

Things are still complicated in the medium price range too. According to retailers, Breitling and TAG Heuer are in constant demand, although connected watches have disappointed. All in all, it feels like demand for classic watches is decreasing, and interest is geared towards something unconventional but affordable at the same time. Rado, for example, is popular, according to retailers. At the same time, the situation has reverted to how it was in the early 2000s, when 70% of sales were concentrated in Moscow.

A decline in advertising volumes, which started even before the economic recession, in 2013, also had a negative impact on the market. Decreased advertising was especially painful for the specialised watch print media, putting its very existence at stake.

Watch promotion is complicated by the fact that distributors are limited by the brands’ guidelines, and often cannot take steps that would be effective in the Russian economic environment. The second constraint is manufacturers’ policies, which create uncertainty among distributors about their long-term relations with suppliers.

Many brands are talking about shifting their advertising and activity towards the internet, but in reality they’re just cutting marketing expenses. Meanwhile, it is on the internet that the main changes have taken place. Swatch opened the first branded online store, and Mercury created their own site. The main trend in commerce is an omni-channel approach, as used by some websites and retail chains. One distributor, TBN Time Distribution, is also developing an interesting approach. All these projects are effective in the entry-level and mid-range segments, where regulation by the manufacturers is less stringent. Where high-end products are concerned, Russians prefer to choose online, but buy offline.

Russia is a rather peculiar country, very different from the others. The situation here will depend on the income of the population, and the promotion activity of the brands. The Russian market has access to experienced operators and extensive infrastructure, including a trade press, major watch exhibitions and business associations. The market has great potential for renewed growth. For example, since the spring, Russians have been spending more money off-board, and the automotive market has increased by 18%. Such things as trust among partners, and confidence on the part of local distributors and dealers in their suppliers, are vital today. In order to succeed, brands have to take into account Russia’s specific features, and show more confidence in their partners.