When a watch is also a genuine tool


Not all journeys are the same... Walkers, ramblers, trekkers, mountain climbers and other explorers do not have the same needs as the jet-lagged passengers of an intercontinental flight or businessmen wishing to reach the entire world by first light. On foot, you make slow progress (on average 4-5 km/hour) and have no need for universal time. But the orientation, altitude, temperature, weather forecast and a whole host of other information proves to be very useful, and sometimes vital.

When a watch is also a genuine tool

Not all journeys are the same... Walkers, ramblers, trekkers, mountain climbers and other explorers do not have the same needs as the jet-lagged passengers of an intercontinental flight or businessmen wishing to reach the entire world by first light. On foot, you make slow progress (on average 4-5 km/hour) and have no need for universal time. But the orientation, altitude, temperature, weather forecast and a whole host of other information proves to be very useful, and sometimes vital.
B

reitling can pride itself on having saved at least one life thanks to the micro-transmi er of the Breitling Emergency watch belonging to a grizzly bear hunter who was lost along the river Susitna, 190 kilometres from Anchorage in Alaska.

"Even if I ended up losing everything, I would always have my watch,” said Mark Spencer who, suffering from hypothermia, apparently succeeded in unscrewing the security stopper, unfolding the main antenna, and activating his watch’s microtransmitter, which then emitted an urgent localisation signal on the international civil aviation distress frequency, 121.5 MHz. This was in 2013. The moral of the story is that tool watches – which the first watches with Universal Time or GMT certainly were – can come in very handy indeed. 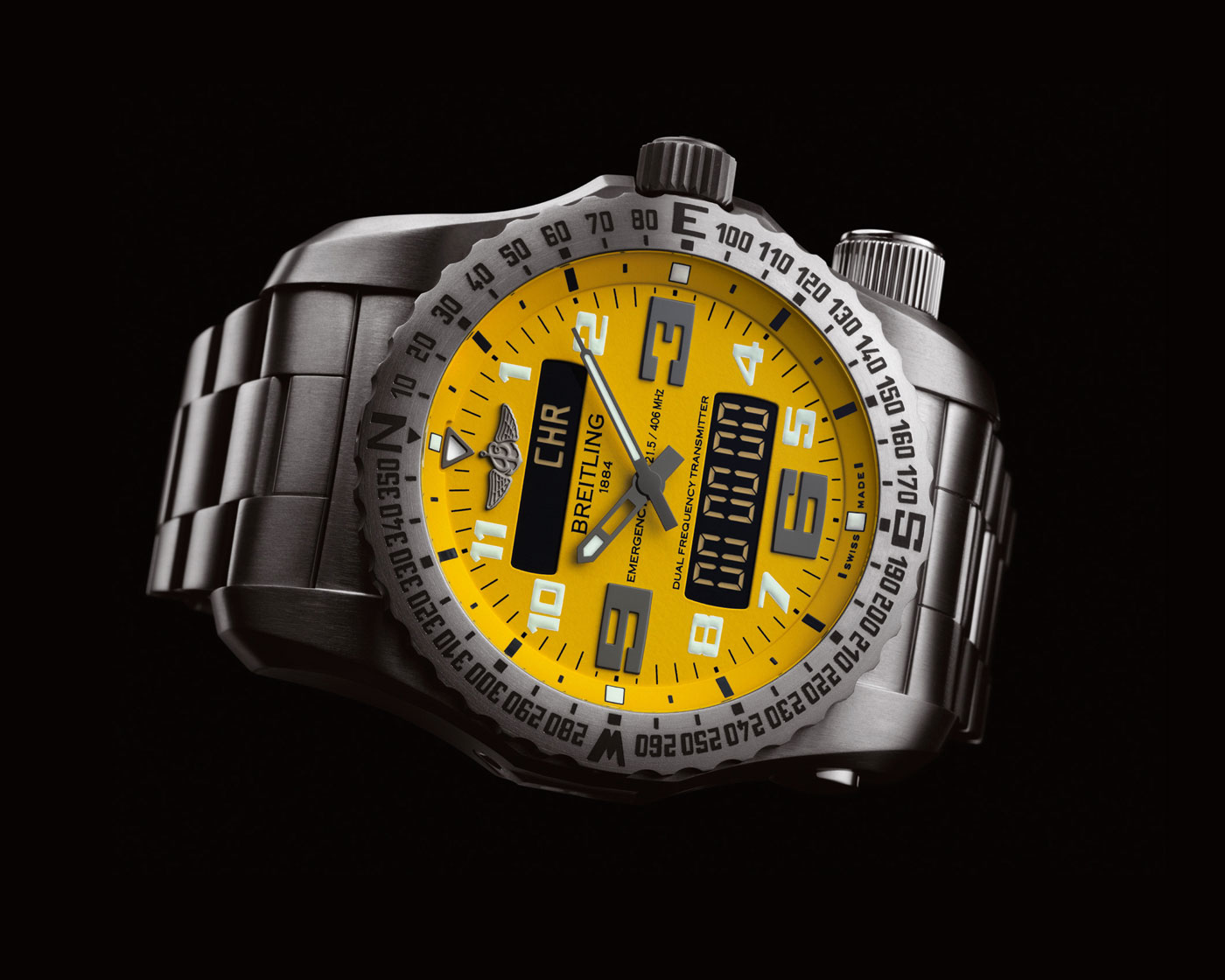 THE T-TOUCH, THE SWISS ARMY KNIFE OF WATCHMAKING

Nearly every hiker carries a Swiss Army knife in their pocket. The Tissot T-Touch performs the same multitude of functions on the wrist. We don’t know if the T-Touch has ever saved a life, but the list of ‘blades’ shows the scope of the services it can perform in all situations: Altimeter • Thermometer • Alarm • Compass • Weather forecast through relative pressure • Chronometer • Altitude difference meter • Second time zone • Azimuth Calendar • Weather forecast through absolute pressure • Countdown timer, etc. The T-Touch was created in 1999. It was the first touch-screen watch, a technology that at the time was reserved for the touch pads used by IT pros. Every touch of the screen attracts a weak charge at the point of contact on the so-called capacitive touch screen, which stores the electrical charges. On the edges of the crystal, circuits measure the charge and send the information to a controller, which processes and redistributes it.

This is all displayed both by the three traditional hands and by the LCD screen beneath the glass of the touch screen. It is a sort of analogue and digital hybrid developed by the engineers at Asulab in Marin who “were able to adapt this fun technology to watchmaking and create this display process that allows you to obtain information that you couldn’t formerly access”, according to François Thiébaud. An ‘augmented’ watch, in its own way. 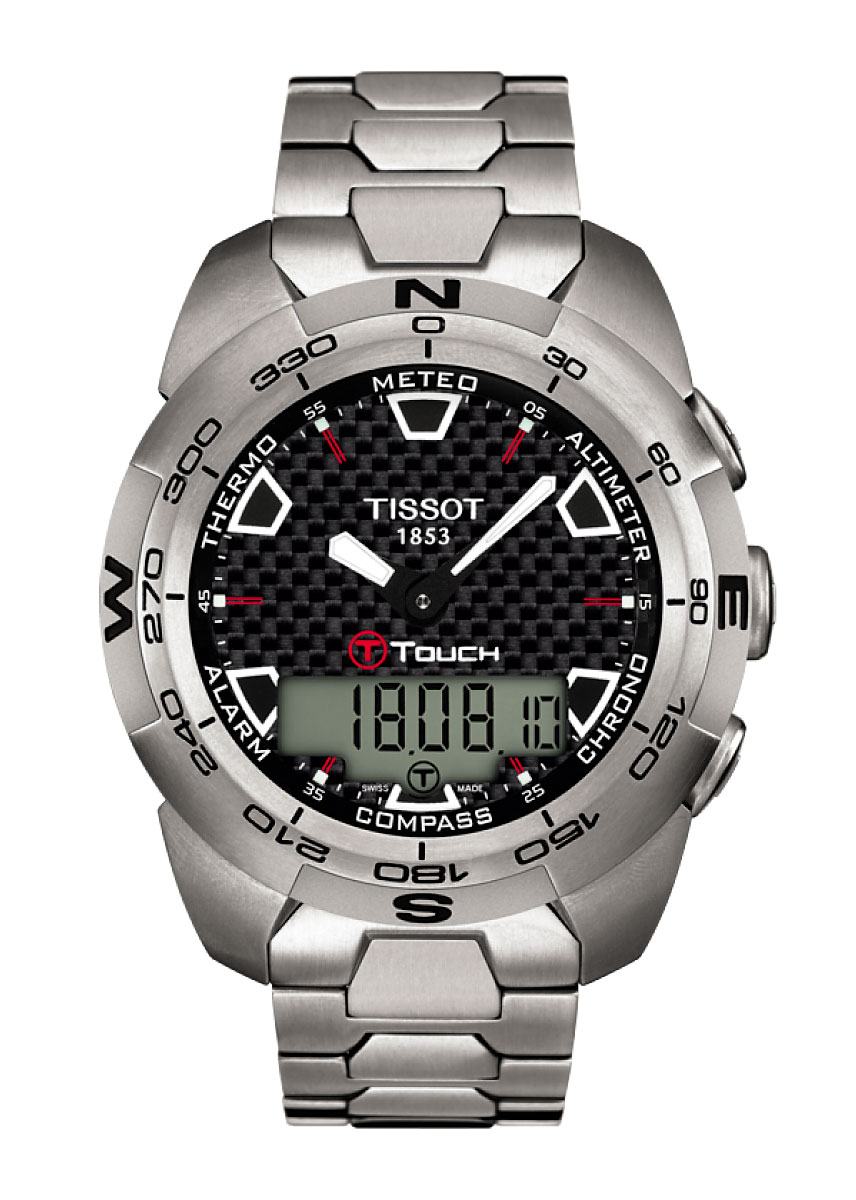 The T-Touch has since considerably widened its scope and seen an incredible number of o shoots. First it was transformed into the Tissot Silen-T, with its classic look, vibrating discreetly on its wearer’s arm to signal a reminder, then the Tissot High-T, for the American market, which from 2004 displayed breaking news, sporting results and the weather via radio frequency. With the arrival of the T-Touch Expert, Tissot again concentrated on its sporting priorities. The Expert allows you to access two neighbouring functions simultaneously, therefore combining the information. It is also more precise and robust than its predecessor. And it is water-resistant to 100m.

There are also specialised T-Touch watches for various sports. For divers, there’s the Tissot Sea-Touch which meets all the official criteria for luminosity, shock resistance, anti-magnetism, integrated timing, and solidity of strap. For sailors there’s the Tissot Sailing-Touch, featuring weather forecasts with histogram and speed measurement over a given distance. And these are just a few examples. Not to mention all the models with functions dedicated to di erent activities and various sports. The list is endless. But the touch-screen watch can also be more urban, particularly in its feminine version, and the Tissot T-Touch II is even sometimes adorned with diamonds. It also targets the younger market with the Tissot T-Race Touch, featuring 11 functions.

In 2014 Tissot introduced a new world première: a solar-powered touch screen watch. The T-Touch Expert Solar has 20 functions, including a perpetual calendar with day and week, dual time zones and two alarms, not to mention the relative pressure weather forecast, altimeter with altitude difference meter, chronograph with log, compass, Azimuth calendar, countdown timer and backlight. All it lacks is the tired hiker’s trusty corkscrew. 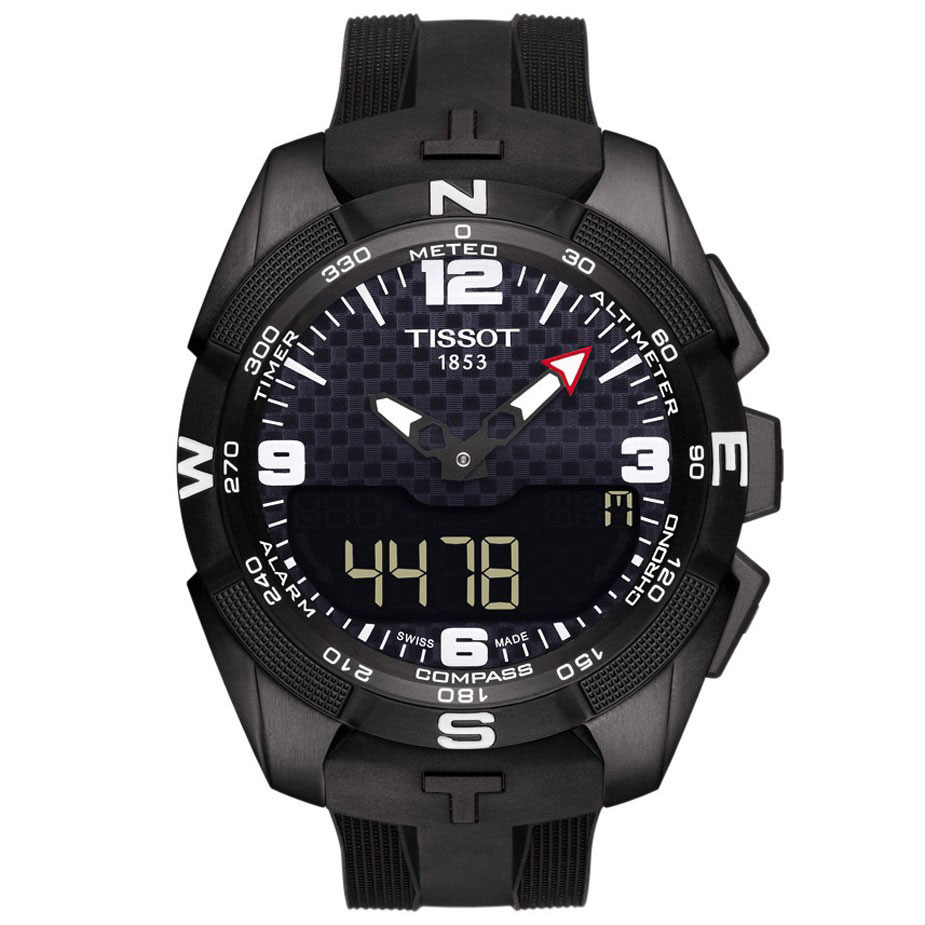 The LCD screen and solar cell are directly integrated into the screen. The solar panel itself is invisible, positioned behind the dial. You could say that the T-Touch is a ‘smartwatch’ before its time. That’s true, but it’s also completely autonomous, relying on itself alone and entirely dedicated to functions that are genuine tools, of direct use in the wearer’s activities. That’s what makes all the difference. And the difference is vital.