Jewellery and the new ways of wearing it


Nowadays, adornments for the ears and fingers are teaching us a thing or two about our anatomy. For a long time, our phalanges held no fascination for us, the mysteries of the helix, concha and lobule were known only to the medical world.

Jewellery and the new ways of wearing it

Nowadays, adornments for the ears and fingers are teaching us a thing or two about our anatomy. For a long time, our phalanges held no fascination for us, the mysteries of the helix, concha and lobule were known only to the medical world.
N

ow jewellery is everywhere, popularly occupying every square inch of our bodies. It has rocked the market from the lowest to the very highest echelons of society.

We women are being swept off our feet by the new jewellery-wearing possibilities. These novel ideas are now suffused with passion and daring: they are speaking out for freedom and captivating a whole new transgenerational clientele. Many a fifty-something woman can now be seen entering a top prestige location, turned (multi) piercing parlour due to popular demand. Take, for example, the White Bird in Paris (just a stone’s throw from the Place Vendôme), the sophisticated showcase for designers, where such sessions are held every month accompanied by High Tea.

Whether jewellery junkies for all time or more recent converts to the cause, more and more of us are starting to sit up and take notice of these creations for flesh long left fallow; “left fallow” meaning left provisionally uncultivated. For a long time, the body was indeed a desert waste, bereft of adornment, while jewellers and metalsmiths were producing pure marvels of exquisite execution. We were long witness to what can only be described as a prolonged abandonment of the body by Western societies, while in so many other civilisations, all parts of the flesh had been bedecked and bejewelled from time immemorial. Seen in a historical sense, the loss of interest is a recent trend and an entirely relative one.

When the whole body was a canvas

For anthropologists, to discover the first items of adornment was to reach out and touch the beginnings of mankind. Jewels are symbols, they stand testament to man’s symbolic thinking. In the Dordogne in France, there is a tomb dating from the Palaeolithic era depicting a child whose head, ankles and wrists are decorated with more than 1000 shells, as well as fox and deer teeth. Before writing was invented, adornment was a form of communication, a message that could be conveyed by the whole body. Jewellery had an identity function, marking a person as a member of a group, and also a social function, indicating status. Depending on the era, it co-existed, with varying degrees of ease, alongside the increasingly popular invention of clothing.

In the Western world, up until the First World War, only the face remained uncovered. Long sleeves, hats, veils, gloves reduced the surface of the canvas. Jewellery, in brooch-form, was attached or stitched onto the garment itself. The hippie trend provided a good excuse for the return of embellishments on more unconventional parts of the body. So, too, did the punk movement, which strove to “stylise a person’s body to mark his/her membership of a group, while nurturing a culture of hyper-singularisation”, to quote Philippe Liotard, an expert in body-altering practices.

Jean-Paul Gaultier, without question the enfant terrible of fashion, created a sensation on the runway in 1994 with his spring/ summer womenswear collection. Gaultier’s “Les tatouages” collection channelled Joan of Arc-type armour with face piercings, graffiti prints and nose clips. This seismic event occurred bang in the middle of the radical minimalist era. The purist’s less is more approach had meanwhile been taken to extremes, making even the tiniest accessory uncool. It finally imploded when the mischievous designer successfully imposed his own unbridled, joyful, cross-cultural vision of fashion.

Since then, accessories in general, and jewellery in particular, have become decisive factors in a fashion show’s success. They are what make the runway spectacular, in the same way as lighting or music. The piercing was irrevocably launched. Once a symbol of “kinkiness” in SM and gay communities, the safety pin ended up piercing the cheek in a rebellious demonstration of transgression and is now well on its way to becoming mainstream.

From Prada to Givenchy and back, Haute Couture adopts new ways of wearing

From hairpins sporting the Prada label through to Dior’s chainmail bibs, jewellery of every kind abounds in all the grand Maisons. Featuring in Chanel’s Spring-Summer 2012 runway show, pearls were used to embellish hair-buns and adorned the neck (and back) of top model Arizona Muse, in her show-closing catwalk.

As every brand well knows, jewellery contributes to the style of a collection. It is the distilled essence of a vision, the quintessence of a season’s inspiration. Often crafted in relatively cheap materials, including resin, acrylic, leather, and brass, they are the shortcut keystrokes for every budding fashionista on a shoestring seeking to fulfil a dream.

For designer Tiffany Bähler, jewellery is no longer the investment it once might have been. From haute couture to readyto- wear, the world of fashion has created a whole new clientele who follow trends by adopting bold statement pieces that contravene traditional wearing habits. Yet, these new ways are not everyone. For example, the facial embellishments created by Riccardo Tisci for the Givenchy Autumn- Winter 2015 show will not be readily copied. Charlotte Chesnais, a big fan of conundrums and young designer working for the likes of Balenciaga, Kenzo and Paco Rabanne is, however, in her element. Produced under her namesake jewellery brand, her silver or vermeil bracelets proved an instant success. A word of caution: you’ll need an instruction manual to set these jewels off to their best advantage! ou bien to figure out how and where to wear these beauties.

A lesson in style, Chanel Iman by Jacquie Aiche

Nowadays it’s possible to find a reasonably affordable ring for two or three fingers. A few centimetres further away, nailwear is also making a notable breakthrough. Paris-based sisters Chloé and Chanael Knopfer, co-founders of the Asherali Knopfer jewellery line, established a reputation for themselves with their minimalist nail caps in black or white gold, mounted on a diamond- or tsavorite-studded band encircling the fingertip.

In Beverly Hills, you may bump into a super-cool designer walking around with bare feet and a long tousled mane on her way to her celebrity hang-out showroom. The body chains designed by Jacquie Aiche, born to American and Egyptian parents, are the offspring of an unlikely union between two cultures, Native American fossils and turquoise and hammered gold amulets from the Middle-East.

Meanwhile, over on the east coast at Jacob & Co, Rare Touch Glove has been around for a while, but it still managed to create a stir at the last edition of Baselworld. Midway between luxury prosthetics and hand corsetry, these precious gloves shine with the fire of 382 brilliant-cut diamonds inlaid into rose gold mesh.

Finally, the Chanel 2018 cruise collection recently unveiled at the Grand Palais proves, if proof were needed, that headbands and head jewellery are more fashionable than ever. 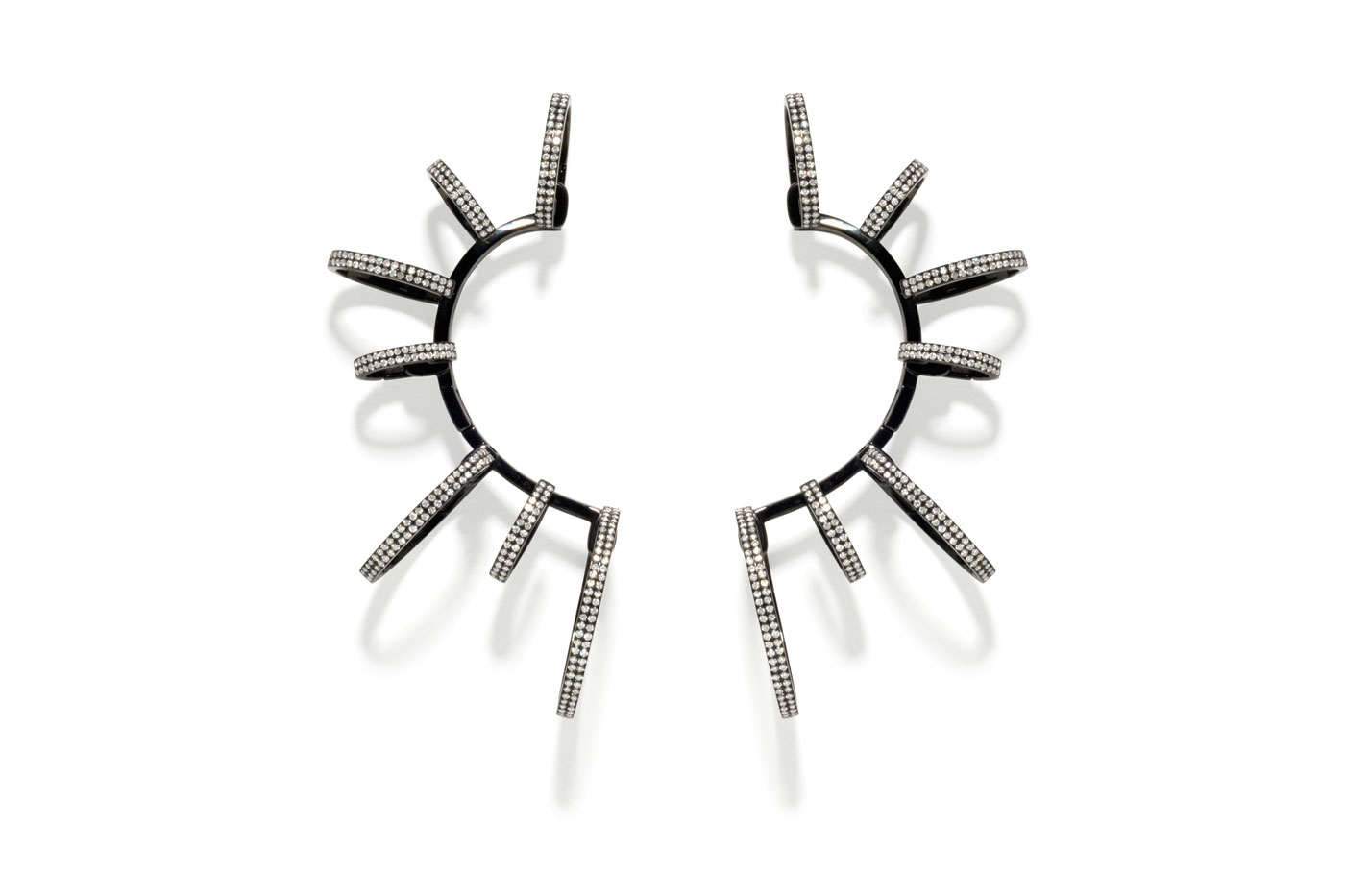 The exceptional case of the ear

Hoops, chandeliers, clips, studs, sleepers: the vocabulary associated with earrings is evocative of a singular world that says much about lovers of ear adornments. Ear-lobe piercings are the oldest known act of body alteration. In cultures throughout the world, women, and many men, wear earrings every day. Buddha himself was no exception. His elongated ear lobes are a reference to his princely origins and to a time when they were adorned with impressive jewels.

In 2011, Gaia Repossi designed an ear cuff for his Berbere collection, inspired by his studies in social anthropology and archaeology. The organic ear embellishment soon became a must-have among fashion designers. Ever since, the High Jewellery creations of the Maison Repossi have decorated the bodies of stars and starlets at red carpet events all over the world.

It is certainly a whole new world for the adventuresome spirit. The terra incognita of the ear has inspired many a designer’s imagination. According to Elizabeth Fischer, in charge of the design, fashion and accessory department at HEADGeneva: “It’s here to stay. Any new territory is highly motivating for the designer. Before short hair styles were in fashion, the ears were kept firmly hidden, they were not revealed until the nineteen twenties. But ear piercing was a taboo subject”. Yet another bastion has fallen. Multiple piercings thus give us a delicious sense of transgression. What joy!

We have finally understood that jewellery has broken free. It has found its own territory, the more it advances, the more space it needs. The thirst for territorial conquest has resulted in the blurring of boundaries. Take, for example, the masks made by the Maison Margiela, headed up by the Belgian designer and supreme master of anonymity, who asked his models to walk the runway incognito. The crystalembellished rosette facemasks continue to fascinate us and constitute a work of art in their own right.

Theatrical, yet not quite so obliterating, the Swarovski crystal veils created by the Australian milline, Reni Kestel play on their precious duality and mystery.

Demonstratively ostentatious, shawls and capes crafted in diamonds by the Chinese brand Kimberlite Diamond are sketching the contours of a new world of excess and immoderation.

Perhaps we are witnessing the “gemmification” of everyday objects, clothes, glasses, headsets, and mobile telephones? It is as if we see no beauty in banality, the mundane is no longer sufficient, it can only exist if embellished and adorned with refinements. Jewellery, joie de vivre, it’s the same difference!