The “baby” brands of Kickstarter


The internet is truly a democratic medium, and its impact has also been felt on the watch industry. We’re increasingly seeing crowd-funded watch projects online that are looking to control the narrative and take financing away from the banks and into their own hands.

The “baby” brands of Kickstarter

The internet is truly a democratic medium, and its impact has also been felt on the watch industry. We’re increasingly seeing crowd-funded watch projects online that are looking to control the narrative and take financing away from the banks and into their own hands.
A

nd many of them promise to bring us a “revolution” of one type or another. So how are these “baby brands” of Kickstarter faring? Below, we highlight some of the more successful – and not so successful – Kickstarter campaigns of the year. 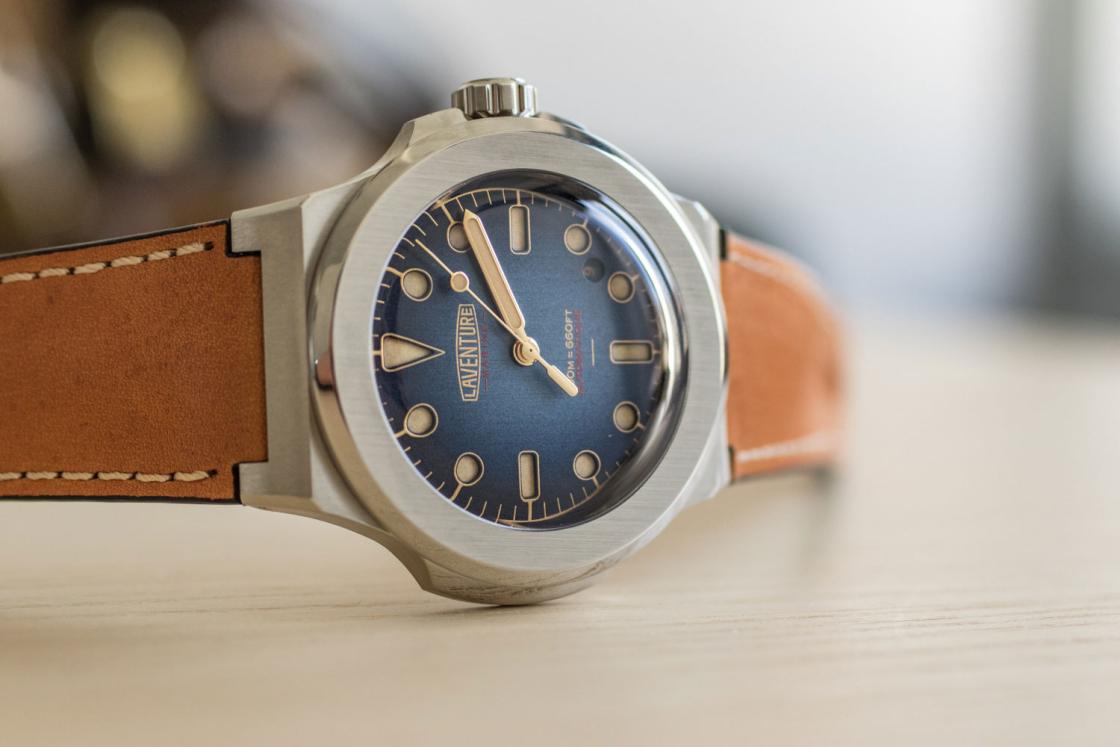 Start-up brand Laventure calls the town of Neuchâtel, Switzerland, home. It’s the base from where brand founder Clément Gaud decided to venture out into the independent world of watchmaking earlier this year. He looked to Kickstarter to do so, where his project quickly raised 201,400 Swiss francs to bring the Laventure Marine to life.

As the name suggests, the watch is inspired by diving watches of the 1960s, buts this is a contemporary take on the classic design that is full of character. The watch is packaged in versatile 41mm stainless steel case that sports a nice, hefty bezel along with a domed sapphire crystal that protects the ETA 2824-2 automatic movement beating inside. What I like most about the Marine is the dial and its textured look. The colour darkens at the edges to give an aged feeling without the years of wear and tear, but it definitely doesn’t sacrifice on readability.

To wrap up the limited edition first release, each Laventure watch will be delivered in a very nicely packaged box inspired by the old books of Jules Verne: Les Voyages Extraordinaires.

CJR hits a trifecta with the Commander series 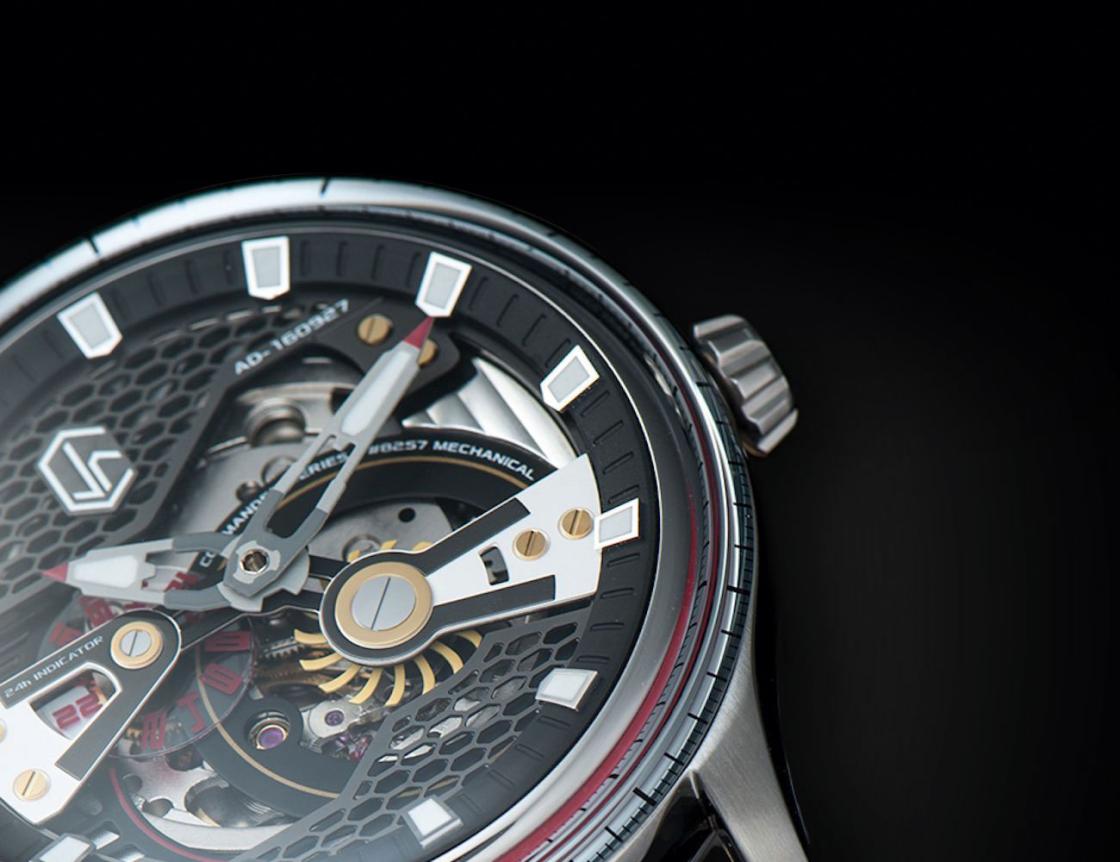 CJR is one of the more established start-ups, if we can consider three years of operation as “established”. The company was only set up at the end of 2014, but it has already impressed with two successful Kickstarter campaigns.

The Commander is the third series we have seen from CJR, and it continues with the aviation-inspired design of the earlier models. That is very clear, for example, in the domeshaped design of the watch, which evokes the cockpits of fighter planes. The second wheel also represents the spinning turbine on a jet engine.

This watch is a step up in terms of its design and engineering from the brand’s earlier releases, sporting an intricate yet well thought out dial. We get hexagonal grillwork on the top and bottom of the bold dial, with super-luminous hour markers and hands to ensure readability in low-light conditions. Overall, the new Commander certainly looks fit to be the flagship timepiece for CJR. It is a sleek timepiece that has managed to find a fine balance of form and function, and all that at a very accessible price of $449 USD. 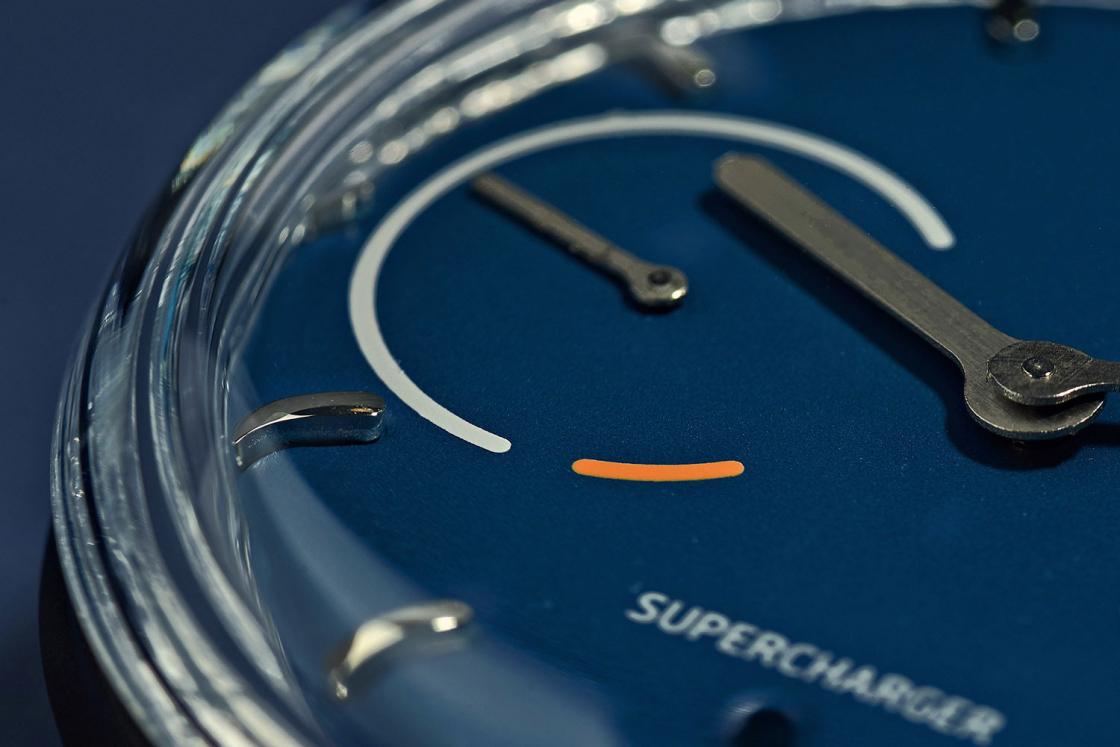 While performance and battery life have been improving with the next generation of smartwatches, Sequent is intent on getting rid of that problem entirely. This is another young and ambitious company based out of Switzerland that recently launched the innovative SuperCharger timepiece on Kickstarter.

The start-up has introduced a kinetic self-charging battery system, which promises to provide “infinite power supply”. Their patented movement is based on a traditional Swiss automatic movement that has been adapted with a self-charging battery system. The stored energy is used for s﻿elect smart features, including a heart rate sensor, GPS tracking and a notification system. What I like about the watch is the clean, well-balanced, and very technical looking dial that features a prominent power indication.

Starting with a modest fundraising goal of only 80,000 Swiss francs, the company has already raised over one million Swiss francs. No doubt the starting promotional price of only $149 USD had to do something with that success. First deliveries are expected in December 2017.

Is the time up on the Chronspire Basilisk? 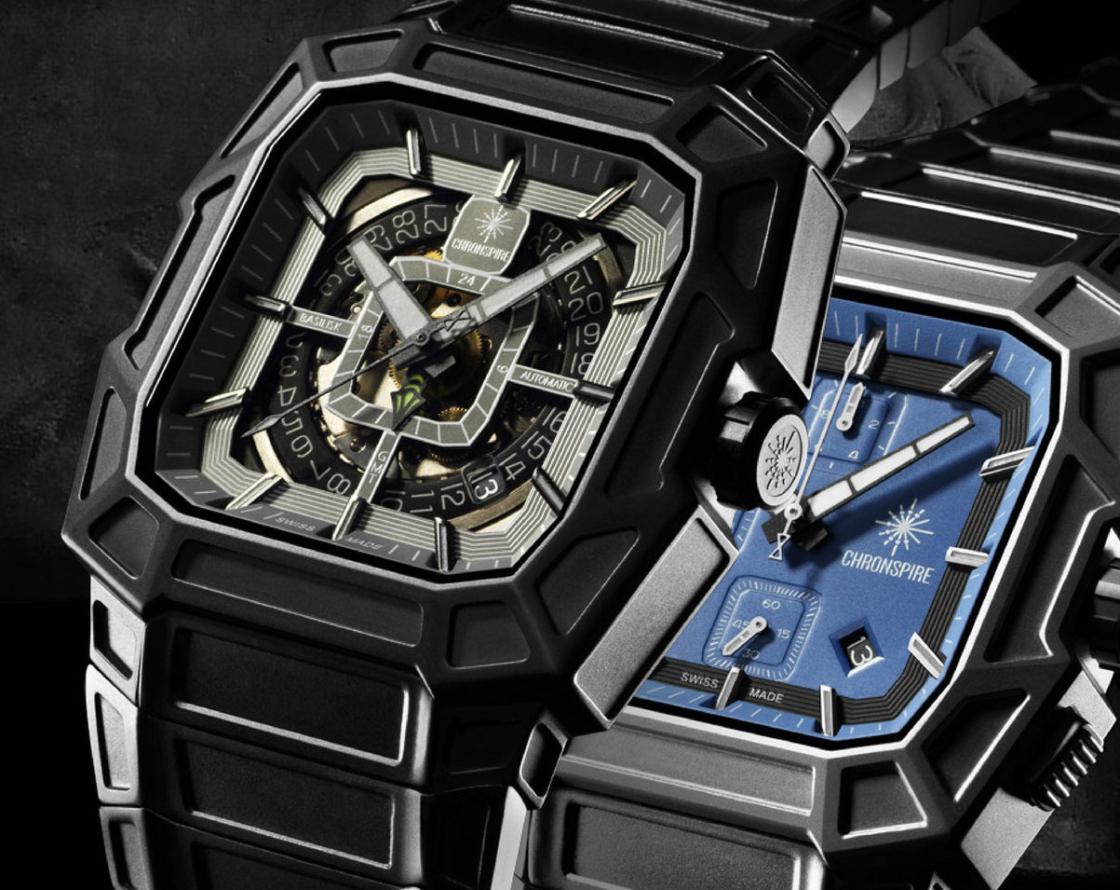 Start-up watchmaker Chronspire took inspiration from Chronos, the Greek god of time, but it seems that unfortunately time wasn’t on the side of this aspiring company.

The brand’s first collection, the Basilisk, was introduced on Kickstarter earlier this year. The signature feature of the Basilisk is something unique - a fully functioning hourglass that has been integrated into the back of the timepiece. To produce an even more special effect, the grains of sand have been treated with a Swiss Super-LumiNova pigment that allows the hourglass to become energised and glow, producing a stunning effect while in the dark.

Unfortunately, the brand’s Kickstarter campaign was cancelled with only 29,577 USD raised of the initial goal of 100,000 USD. That just goes to show that competition in the watch industry is as intense as ever, and perhaps even more so with the online crowd-funding scene. 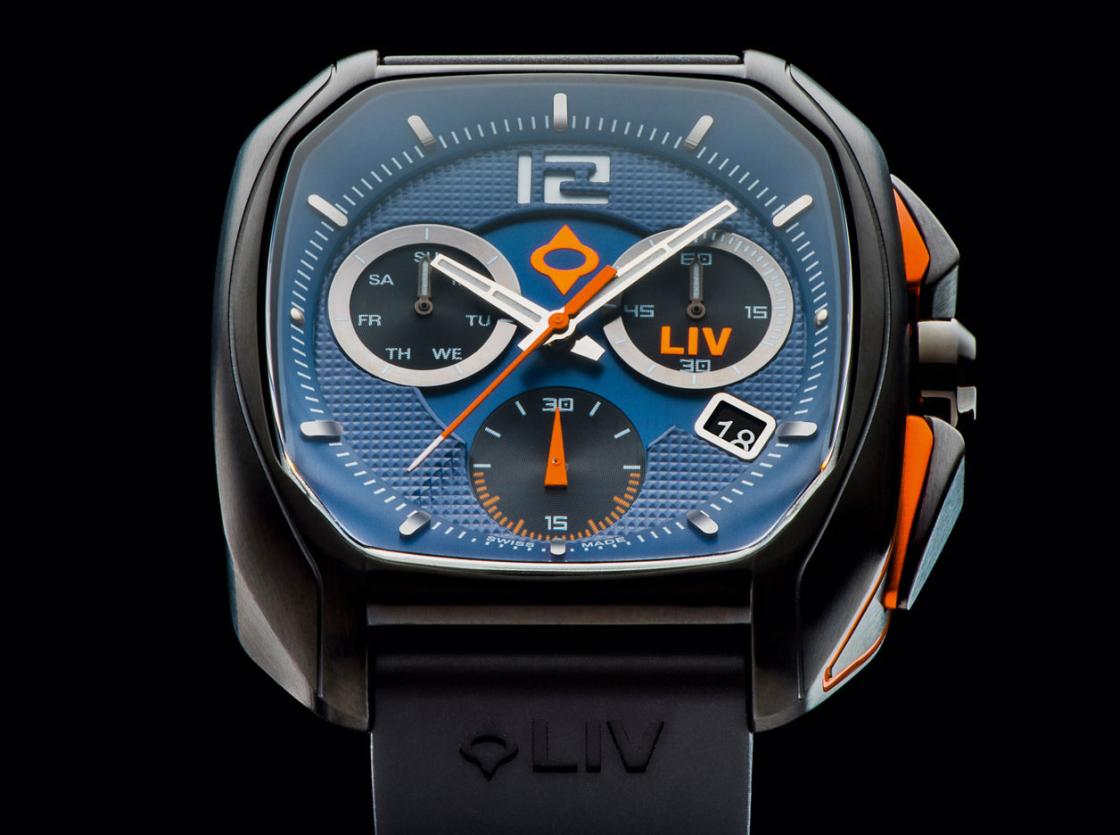 LIV was set up in 2012 with the motto, “Dare to LIV.” I suppose that would hold true for all new companies during the precarious early days, but this one did exactly that. Just over four years in the business, and LIV has really come to life with its third Kickstarter campaign. The latest Rebel series has been made available in four different models: a chronograph powered by the Ronda Z60 Swiss Quartz; an automatic fitted with a Sellita SW200-1 calibre; an automatic chronograph driven by the SW500; and, most recently a GMT model powered by the Ronda PowerTech Cal.515.24H Swiss Quartz.

Like with many young and ambitious start-ups, the objective of LIV Watches was to design quality affordable watches for people who don’t necessarily have the classic watch look in mind. And with prices firmly within the triple digits, LIV has been one of the most successful watch projects on Kickstarter, raking in about 1.7 million USD to fund the Rebel. Mission accomplished. 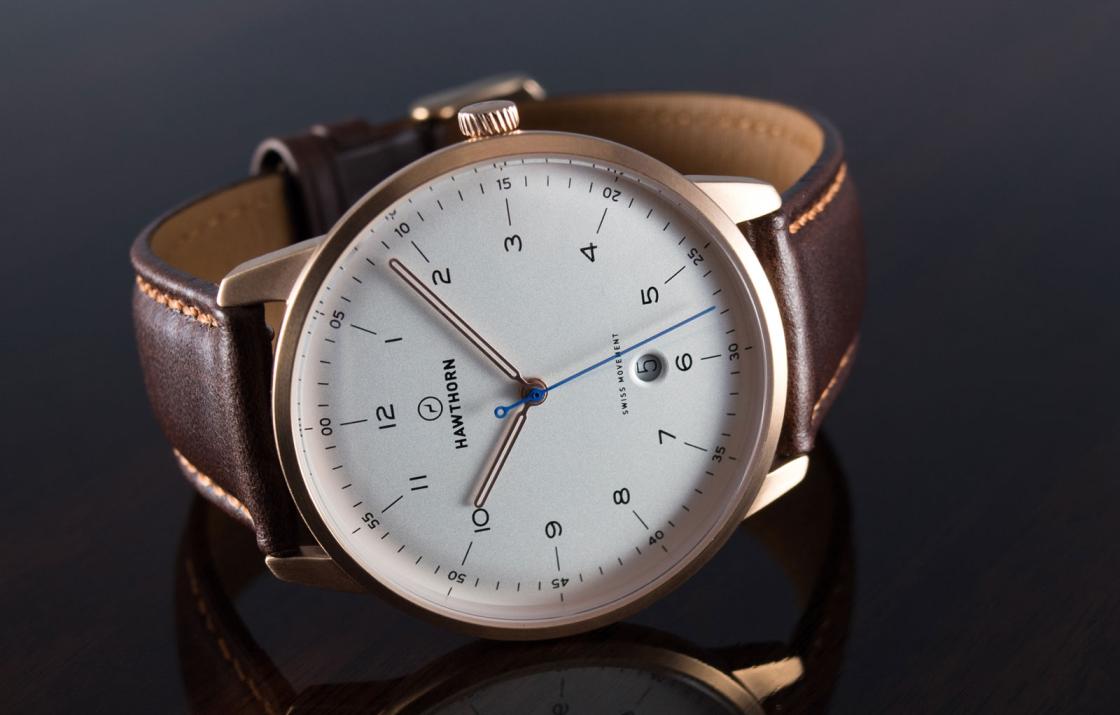 American start-up brand Hawthorn Watch Co. has a nice story to tell. The brand was inspired by co-founder Brian Dunnigan’s grandfather, a watchmaker based out of New Haven, who actually served during World War Two. Upon his return stateside, he studied watchmaking at the famous Waltham Watch Company.

Keeping watchmaking a family affair, this new brand was established by Brian in partnership with his college friend Jeremy Crossgrove, who is also the lead designer. It took the duo 15 months to design and engineer their first watches, the Heritage and the Heritage classic. Their design evokes the era when Brian’s grandfather started his watchmaking craft, back in the 1950s. The white and black dials are clean and legible, helped by a domed sapphire crystal and a stainless steel case that is only 7mm thick, which further enhances that vintage feel.

Just in case you missed the Kickstarter campaign, these clean and elegant watches are expected to retail for a reasonable 299 USD once they hit market.