Cuervo y Sobrinos has rediscovered one of its historical chronographs, created in 1946, endowed with a bi-compax layout and a Landeron 248 movement. The brands is unveiling the Historiador Landeron, a reinterpretation of said former classic, equipped with a fully restored Landeron 248 movement. The new model is available in two dial options, each adorned with period text.

Cuervo y Sobrinos has rediscovered one of its historical chronographs, created in 1946, endowed with a bi-compax layout and a Landeron 248 movement. The brands is unveiling the Historiador Landeron, a reinterpretation of said former classic, equipped with a fully restored Landeron 248 movement. The new model is available in two dial options, each adorned with period text.
S

ometimes when we look to our past, we rediscover a forgotten moment or beloved object. Cuervo y Sobrinos has returned to 1946, a bygone era, when the company’s Latin style was much in evidence. At this time, the prestigious brand produced a bi-compax chronograph which featured a Landeron 248 movement, an evolution of the legendary Landeron Calibre 48, a highly popular chronograph movement during the 1950s and 1960s. 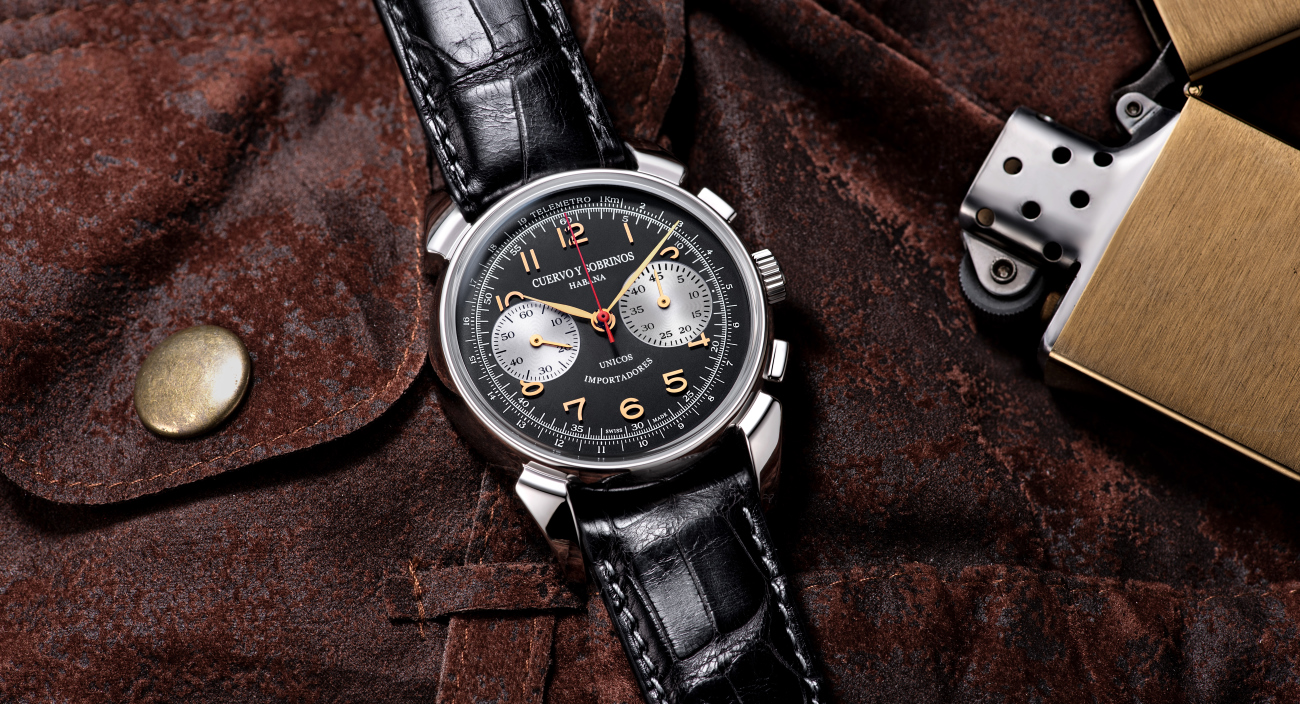 Today’s reinterpretation is equipped with a see-through case back, allowing sight of a fully restored Landeron 248 movement. Unlike most modern-day movements, the bridges are comparatively small, affording views of the wheels and levers at play. The various bridges are embellished with an understated brushed finish.

This reinterpretation of the aforementioned 1946 model is presented in a 40mm stainless steel case, consistent with modern tastes but bearing a close resemblance to the housing of the 1946 classic. The elongated lugs project noticeably, causing the watch to sit squarely upon the arm, affording a comfortable union with the wrist.

In 1946, Cuervo y Sobrinos made its own jewellery and watches, but it was also a prominent retailer in the American continent. The company sold some of the most important watch brands of the time with several firms engraving the dials of their timepieces with the Cuervo y Sobrinos name. These co-brand watches were produced by Longines, Patek Philippe and Rolex, to name but a few. In addition, the dials were often marked with the phrase, ‘unicos importadores’, meaning ‘only importers’, a reference to the exclusivity afforded to the prestigious retailer. Cuervo y Sobrinos has chosen to replicate this historical text on its latest offering.

Feuille-shaped hour and minute hands succinctly convey the prevailing time. The dial features two subdials, arranged on an east-west axis, a 45-minute chronograph register, positioned adjacent the crown, and a small seconds display opposite. The scale and position of the subdials imbues the display with a becoming symmetry, augmenting the overall aesthetic.

The Historiador Landeron is available in two dial variants, each infused with Latin creativity. The first model features a black dial with contrasting silver-toned registers. Golden hands and Arabic numerals add a touch of sophistication, while the red central chronograph seconds hand appears rich and vibrant, traits which are omnipresent in downtown Havana. 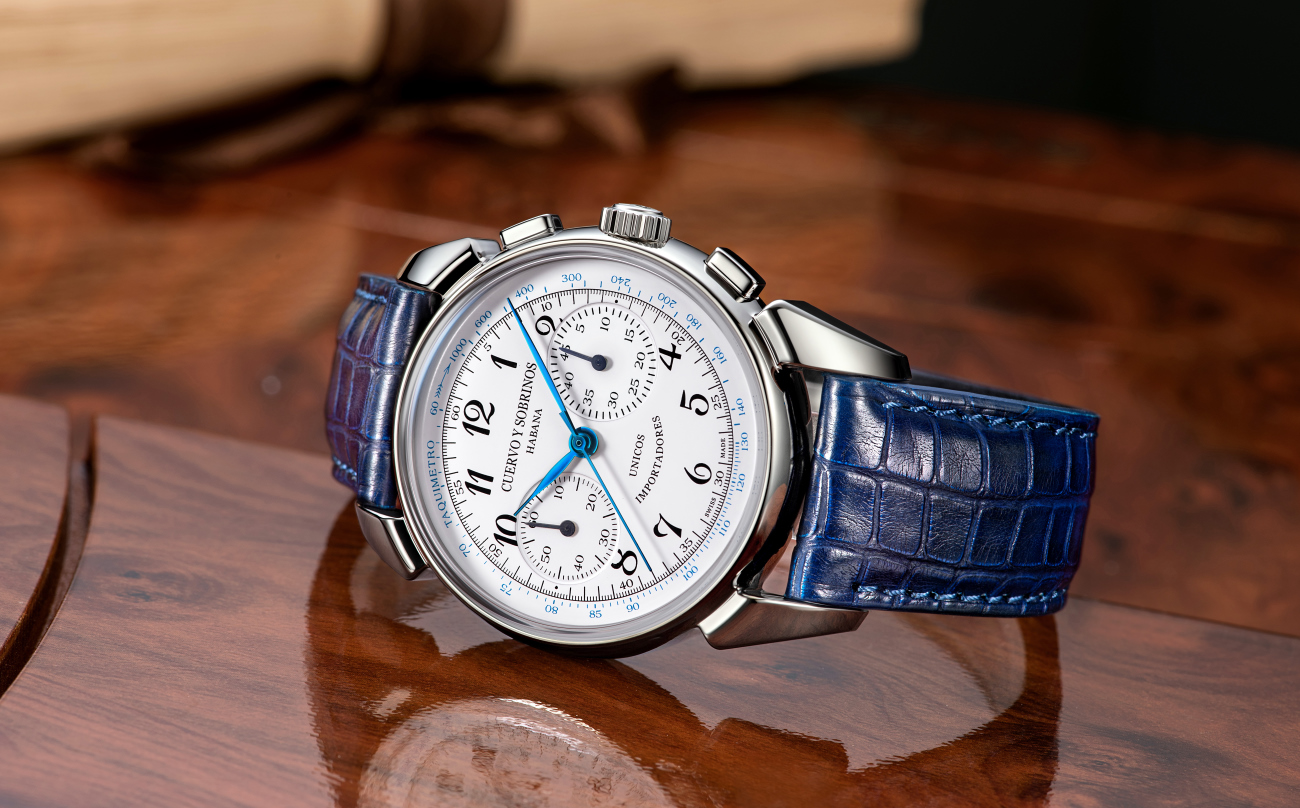 Consistent with the original watch, the black dial variant is equipped with a telemeter scale, a popular feature during this period. The observer actuates the chronograph on seeing an event and then halts the chronograph when they subsequently hear the sound. The wearer can then determine how far away the phenomenon is using the accompanying telemeter scale. 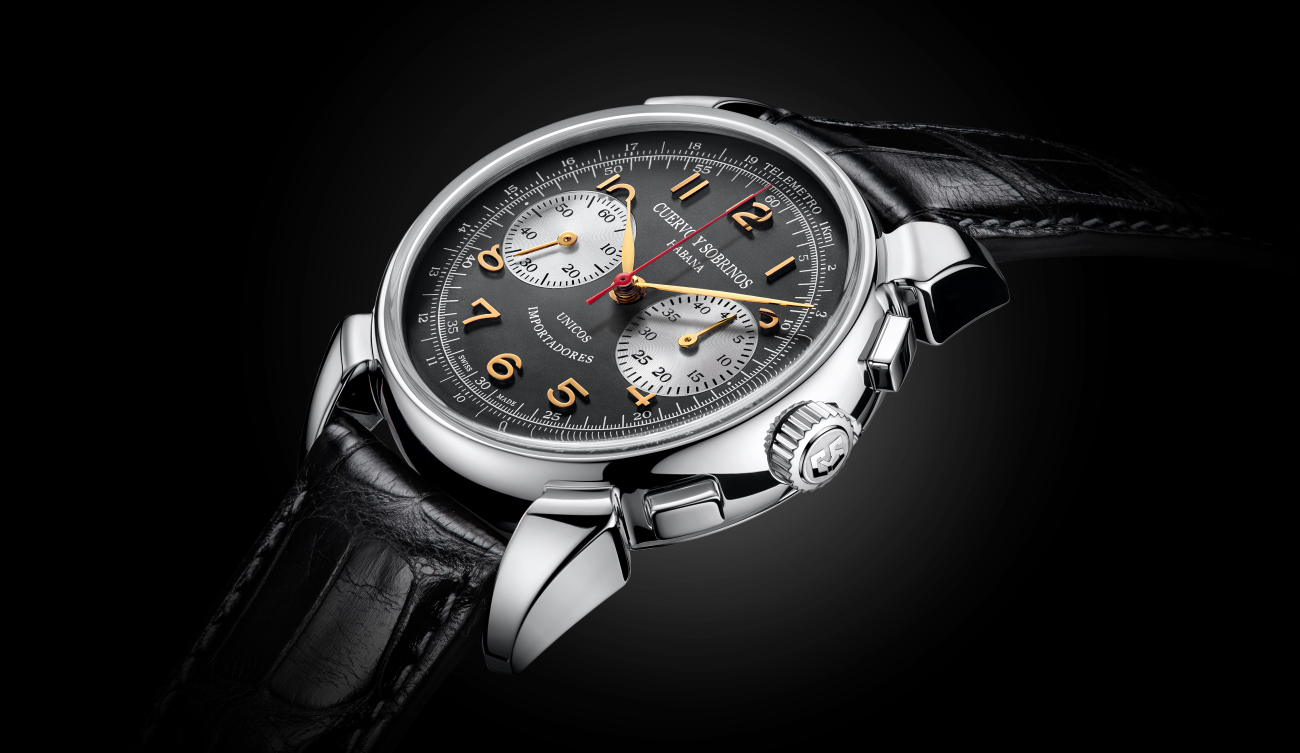 The second dial option features a white dial, paired with blue hands and a blue tachymeter scale. Its tone is a tad more reserved than its sibling. The hours are denoted with black, intricately-formed Arabic numerals. They supplant the mere perfunctory, exuding elegance and period style.

Cuervo y Sobrinos has looked to its past and rediscovered a horological gem from 1946. However, while the Swiss Maison is proud of its history, it embraces modernity, hence the model features subtle refinements suited to contemporary living. Indeed, the Historiador Landeron is a reinterpretation of a former classic, perfectly refined for today’s watch collector.