Fifty years after the Doxa Army was born, the brand honours its history with the Swiss Army’s elite divers unit by reissuing, for the first time, a limited edition of the famous model that has become an instantly recognisable cult timepiece.

Fifty years after the Doxa Army was born, the brand honours its history with the Swiss Army’s elite divers unit by reissuing, for the first time, a limited edition of the famous model that has become an instantly recognisable cult timepiece.
D

oxa stands out in the Swiss watchmaking landscape as one of the finest examples of a discreet watch brand with a rich and exciting history. Now located in Biel, in the heart of the watchmaking industry, and owned by the Swiss Jenny family, it remains one of the legendary brands in the field of diving watches. Numerous patents and prizes at national and international exhibitions, too, have contributed to its remarkable history and outstanding heritage.

Rewind to the early 1960s. The space race is on and the whole world is looking to the stars. At the same time, another universe, much closer yet just as mysterious, also calls to us: the Sea. Urs Eschle, head of development for Doxa watches, clearly sees where all these fascinating documentaries, TV shows and magazine articles about underwater adventures lead to. Watches developed expressly for diving have been around for quite a while, but their cost is still prohibitive. Urs decides that something has to be done. The year is 1964.

The diving watch Urs Eschle envisions would not just be reliable, affordable and attractive to the growing number of scuba enthusiasts; it would also be up to the toughest standards as a tool watch for professional divers. He sets up a team that includes professional divers such as Claude Wesly, whose missions with Jacques-Yves Cousteau and active involvement in the Précontinent I, II, and III undersea habitat research programs initiated in 1962 (similar to the Sealab project carried out a few years later by the US Navy) have already gained him living legend status. 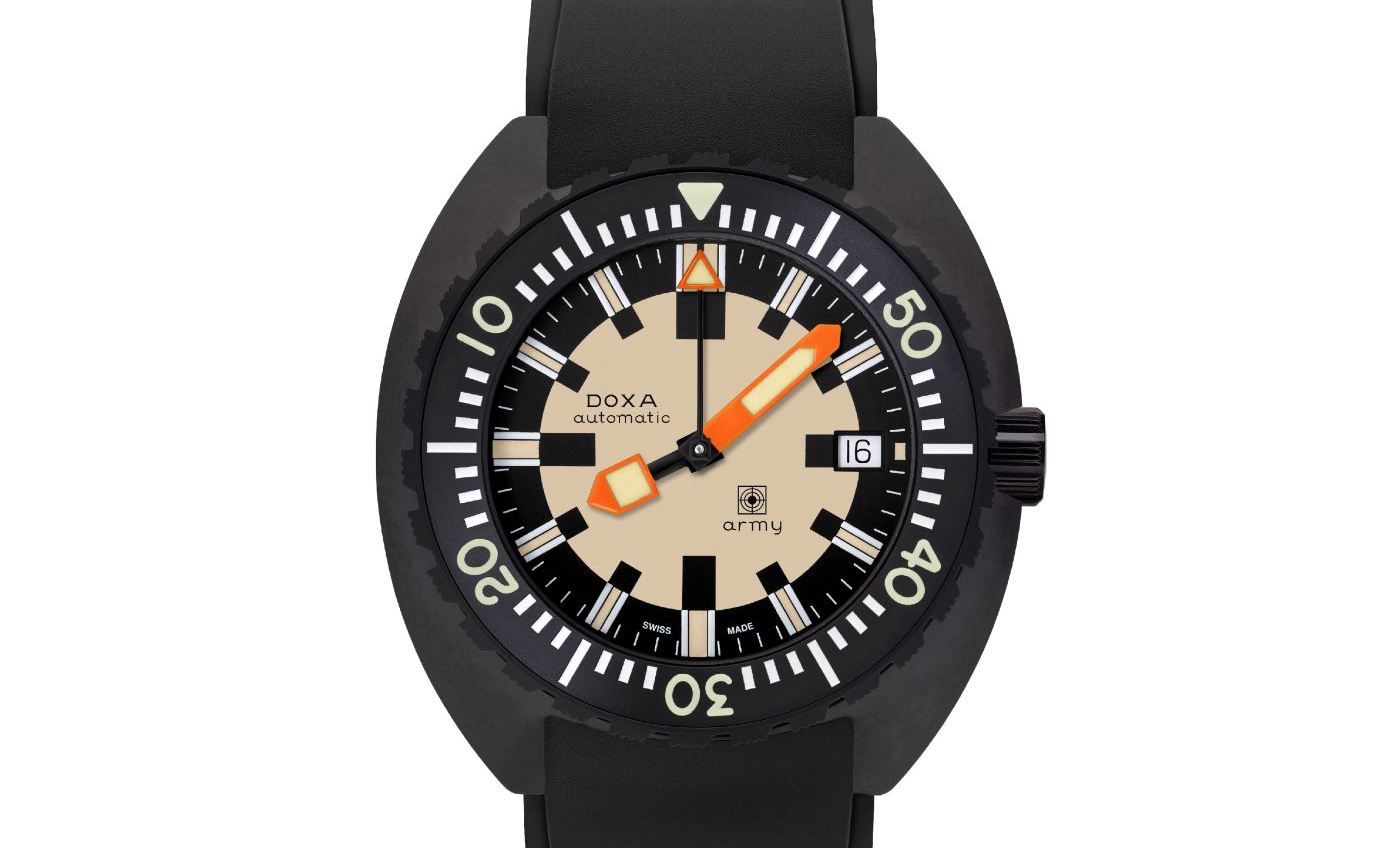 The team around Urs Eschle understands that the underwater environment is not without risks and that divers depend on their timekeeper for their safety, indeed their life. So, it is with a deep and strong sense of mission that a three-year process to develop the perfect dive watch, the DOXA SUB concept, begins.

The SUB 300 and SUB 300T unveiled at Baselworld in 1967 are the first 100% professional diving watches designed to be affordable to a broader public. And because of their quality and the radical innovations they introduce, they quickly become the reference for uncompromising professionals as well. These two models, water resistant to a pressure depth of 30 ATM (short for atmospheres, i.e., 300 meters or just over 980 feet), are also the first diving watches ever to feature a patented unidirectional rotating bezel for calculating and monitoring the dive time to ensure a safe ascent without decompression stops.

Another first in the diving watch universe: the bright orange dial, a legendary hallmark of the Doxa SUB concept. There is method to this unconventional choice of dial colour: it is arrived at after extensive legibility tests at various depths. Besides cementing its credentials as a tool watch, the orange dial makes a DoxaSUB instantly recognizable from afar – and quite distinctive from the standard black or white dials on all the other dive watches at the time. In addition, prominent indexes and an oversized minute hand (after all, that is the main unit of time when diving) coated with beige Super-Luminova™, makes it easier still to register mission-critical information in the low visibility conditions encountered underwater.

Within a year, in 1968, Captain Jacques-Yves Cousteau, co-inventor of the Aqua-Lung breathing apparatus and the spiritual father of modern scuba diving, is sufficiently impressed to adopt the DOXA SUB concept: the SUB’s orange dial becomes the sign of recognition on the wrists of the divers jumping into the water from the deck of “Calypso” to take millions of viewers on the legendary missions of "The Undersea World of Jacques Cousteau”.

In 1969, the Doxa SUB concept passes muster as the Official Watch of the Swiss Army’s Elite Combat Diving unit.

In 1966, the Swiss Army sets up a special force of military divers, trained to become an elite corps. The first members of this highly specialized Swiss diving unit begin training in 1968. It is also around this time that the DOXA SUB 300T passes the stringent evaluation procedure set up by the Swiss Army for the items that would be part of the standard equipment issued to its divers.

Between 1968 and 1975, Swiss Army combat divers are systematically equipped with a SUB 300T Professional – the same as the one launched in 1967, now more popular than ever with divers everywhere.

Approximately 150 SUB 300T Professional watches are issued to the Swiss Army’s elite divers. Etched on the back of each case: the serial number matching the personal diving equipment with each diver – who was also allowed to use the watch off-duty.

The SUB 300T is so popular with the Swiss Army’s elite diving unit that other units outside of Switzerland also adopt this model.

1969: Within the framework of its collaboration with the Swiss Army, Doxa develops a dedicated model, aptly designated “Army” – and branded “The ideal watch for military divers”.

The distinctive matte black case, matte black insert diving bezel and sand-beige dial eliminate any risk of glare whilst ensuring excellent readability in low visibility conditions. In fact, Dr. Peter Nussberger, the Swiss physician of world renown at the forefront of diving medicine (also referred to as undersea and hyperbaric medicine (UHB) and author of numerous reference works, actively accompanies the Swiss Army’s divers – and receives his personal Doxa Army as part of his own military service.

Jan Edöcs, CEO of Doxa, comments: “The Doxa Army is – due to its history with the Swiss Army, and its unusual original design – one of the most sought-after vintage DOXA pieces for collectors. It is truly a pleasure and an honour to call this cult model of our brand back to active duty with this new Limited Edition. This reissue remains painstakingly faithful to the original design, with the black matte ceramic case and COSC-certified precision movement adding a subtle dimension of materials and performance that is in tune with our times. Following the official recognition of the Swiss Army Divers by Swiss Federal Councillor Viola Amherd six months ago, we feel proud and privileged to celebrate not only an exceptional watch born more than 50 years ago, but also the excellent collaboration with our partner ‘Watches of Switzerland’.”

The Doxa Army occupies a special place in the brand’s history not only because of its connection with the Swiss Army. It was also one of the very first watches to use a coating process for cases that was relatively new to the watchmaking industry: the stainless-steel case was blackened by oxidation, giving it a matte black finish that prevented any glare, a key criterion for military equipment. This visual effect, quite original at the time, is maintained in today’s reissue through the choice of matte black ceramic for the case.

The Doxa Army remains a fine example of Doxa’s innovative spirit in the development of diving instruments perfectly adapted to each situation, be it for scuba pioneers such as Captain Jacques Cousteau and his team aboard the Calypso (who praised the patented no-decompression dive bezel introduced with the first SUB models), for professional divers (who appreciated the additional safety and utility of the helium valve-equipped SUB 300T Conquistador), or for use in the military (with the discreet Doxa Army).

Just like the first SUB with its original orange dial, the Doxa Army of that era is now one of the rarest and most sought-after models of the brand.

Today, more than 50 years after its debut, Doxa and its Anglo-American partner Watches of Switzerland are reissuing the Doxa Army in a very small Limited Edition of only 100 pieces.

Each watch comes in a packaging designed specifically for this edition and sporting the original camouflage pattern used by the Swiss Army at the time the watch was first issued. The box also includes two straps: one made from black FKM rubber and one NATO strap with a camouflage pattern. 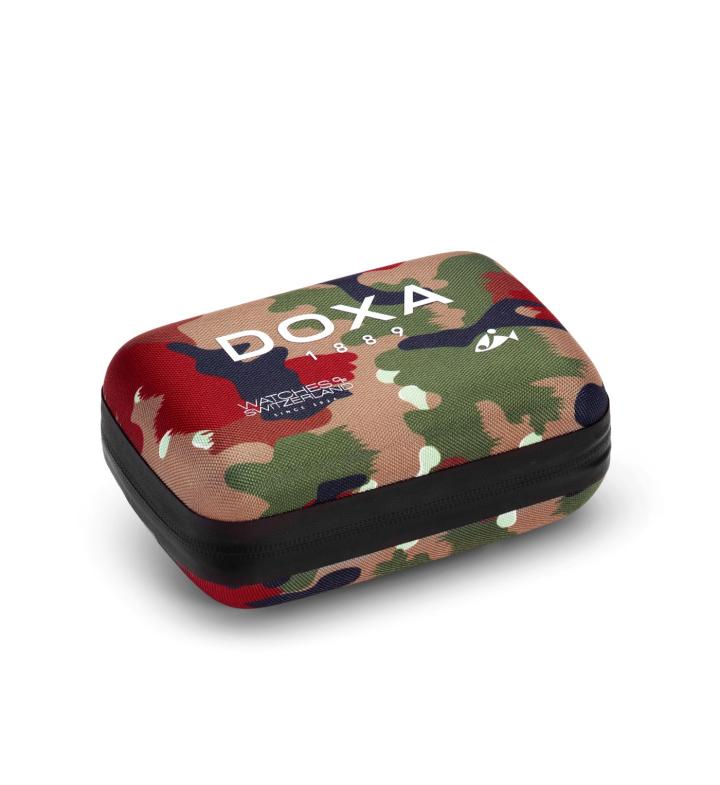