nheriting the style of its predecessor, Akrivia’s new Chronomètre Contemporain II (RRCC02) continues the distinctive aesthetic that’s now a signature of the brand. The character of the timepiece is exemplified by the all-new calibre RRCC02 within. Symmetrically constructed and finished to haute de gamme standards like the first edition, it is the culmination of three years of development.

While it is instantly recognisable as an Akrivia movement – it might even be mistaken for a first edition at a glance – the RRCC02 is a wholly new construction which combines twin barrels and going trains, along with an independently-driven jumping seconds that boasts a hacking and zero-reset function, all of which are features not found in the original model.

Akrivia was established to produce fine watches in the grand tradition of Swiss watchmaking, particularly that of the haute horlogerie brands long based in Geneva – an ambition that took physical form with the first Chronomètre Contemporain (RRCC I), which won the Men’s Watch Prize at the 2018 Grand Prix d’Horlogerie de Genève.

The crystallisation of founder Rexhep Rexhepi’s long-held aspirations, the RRCC I is an artful fusion of the storied past of Swiss watchmaking combined his vision of its future. The RRCC I combined classical design and finishing, but was subtly elevated with contemporary flourishes. The dial, for instance, is grand feu enamel, the standard material for dials in high-quality 19th century pocket watches, but endowed with a design that’s a modern twist on the traditional “sector” dial of the 1930s and 1940s. 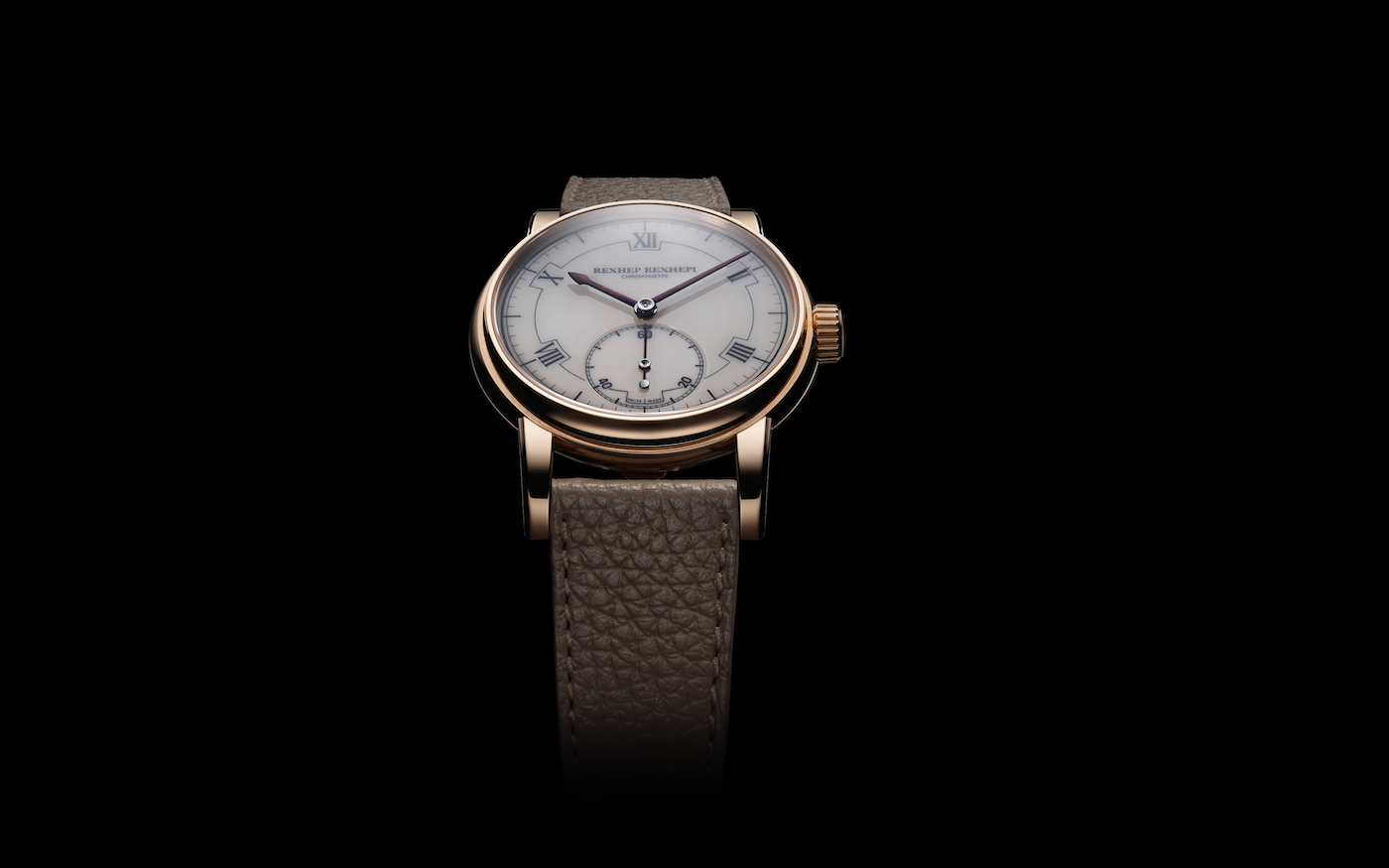 The RRCC02 is built on the same principles, but taken to the next level. On the front, it preserves the refined guise of the first edition. Once again grand feu enamel, the dial retains the chapter ring characterised by alternating Roman numerals.

The vitreous enamel dial is produced the old-fashioned way – with a skilled hand and a fine paintbrush – and then fired in an oven, a process that has to be repeated several times to achieve the glossy, indelible finish that defines true enamel. Once perfect, the enamel dial is lapped with an abrasive paste to hone the surface until it is almost glassy in its smoothness.

Painstaking as it is, the process has to be repeated because each dial is made of two parts soldered together: the recessed subsidiary seconds and the main dial. Notably, one of the subtle refinements of the dial from the first to second generation literally lies in between the two parts – the dial now does away with the gold retaining ring around the seconds register, allowing the sub-dial to join seamlessly with the main section of the dial. 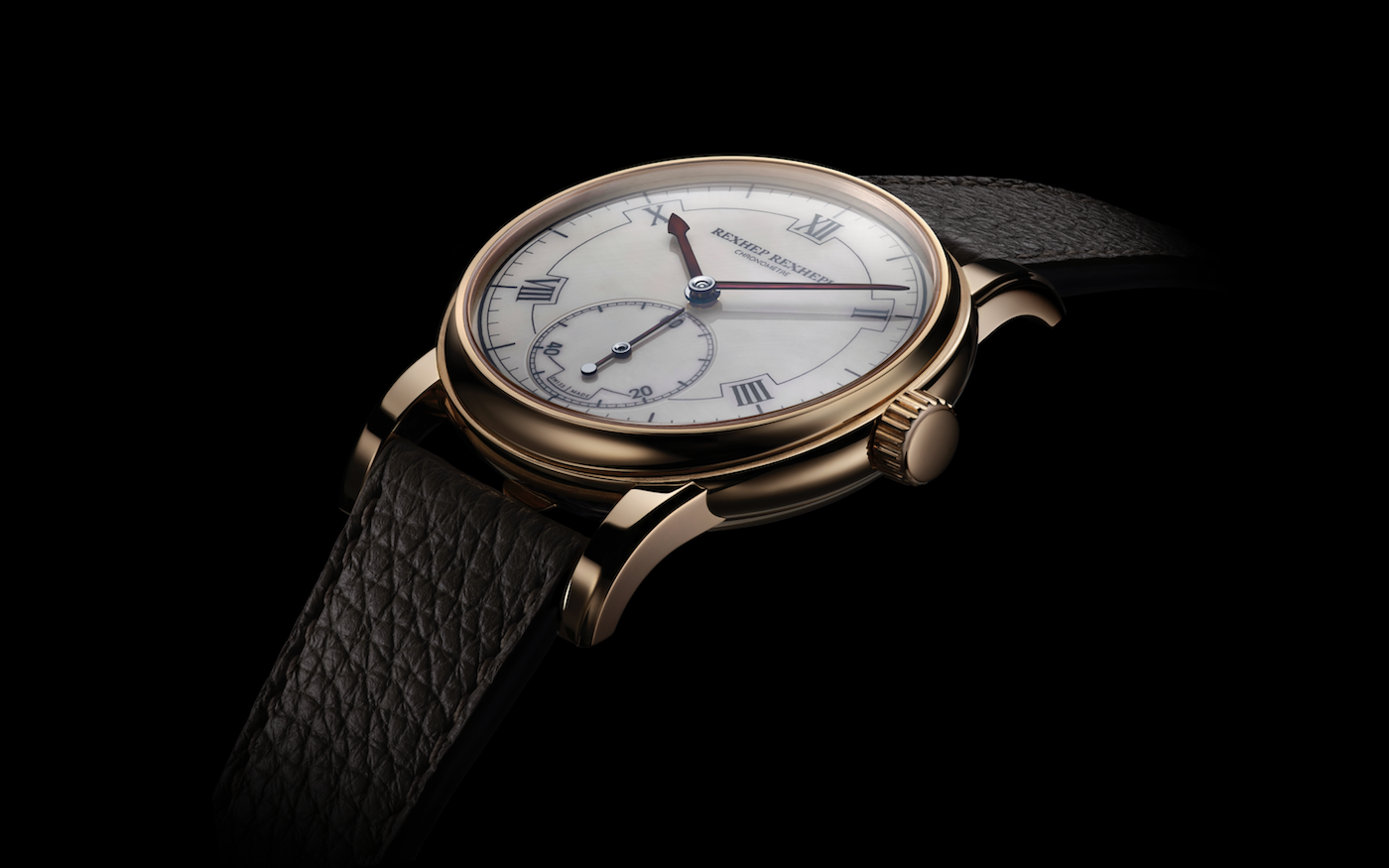 The markings on the dial are also fired enamel; first printed in liquid enamel and then fired once again to set the markings. Continuing the careful refinements that characterise the RRCC02, the markings have been subtly reworked – the hour markers are rendered in a heavier font, giving them greater presence.

The platinum case is paired with a fired enamel dial in piano black – lustrous, deep black with a glossy finish – with all the markings in ivory enamel. Seemingly stark and monochromatic at a distance, the black dial has a decorative detail apparent only up close: the seconds register is finished with a hand- engraved gratté pattern that’s then coveared with translucent grey enamel.

The chromatic opposite is the white enamel dial of the rose gold model. Faintly translucent in its subtle colour, the white dial has markings in black enamel for contrast and legibility. Once again the dial is distinguished by a detail visible only upon closer examination: the hands are heat-treated by hand at about 800 degrees Celsius to give them a rich purple surface. 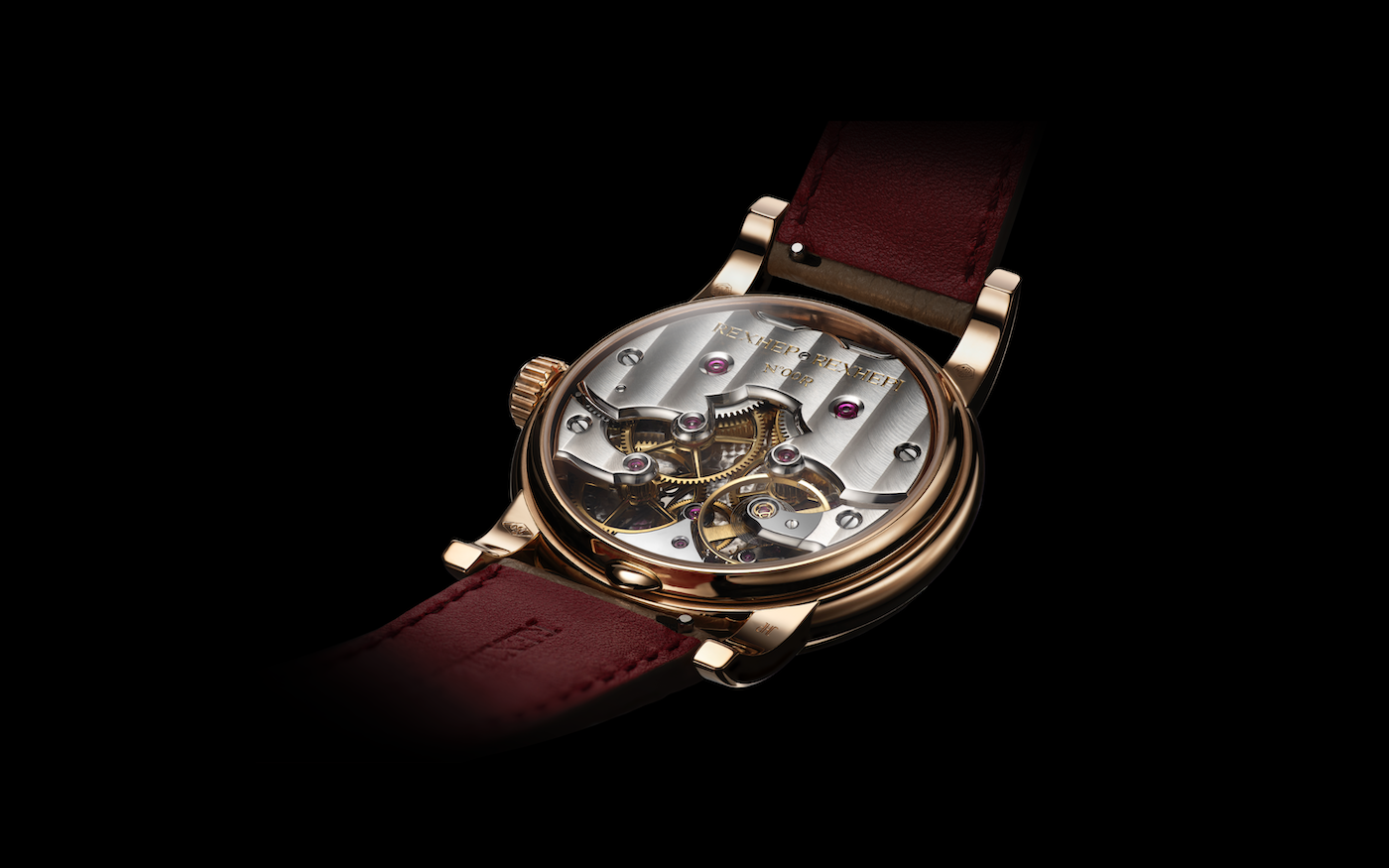 Turn the watch over and the RRCC02 movement has an uncanny air, appearing identical to its predecessor at first glance, but revealing itself to be a different reality with a second look, like déjà vu after a lucid dream. A wholly new construction with different mechanics and functions, the new calibre has been carefully conceived to echo the design of the first edition.

One barrel supplies energy to the balance wheel, the beating heart of the watch responsible for keeping the time. And the other drives the jumping seconds, allowing the seconds hand to leap forward crisply in one-second steps without impacting the movement’s precision. This twin-train construction is novel and stands in contrast to the conventional, single-going train setup of the first edition.

Beneath the seconds lies the hacking and reset function. Pull the crown and the seconds hand will instantaneously return to 12 o’clock and halt, a convenient feature that allows for precise time setting. The elegant simplicity of the function – the seconds hand resets and halts in the blink of an eye – belies its complexity.

Once the crown is pulled, a mechanical ballet unfolds behind the dial. The process begins with a long arm known as the hacking lever, which touches the rim of the balance wheel, stopping its oscillations and freezing the movement.

The same lever also activates the brake for the seconds wheel, halting its motion in order to safely accomplish the final step – the zero reset of the seconds hand. Relying on a heart-shaped cam and reset hammer, the reset mechanism is identical to that of a chronograph. The hammer falls, causing the cam to rotate until the hammer lies at the lowest point of the cam’s outline, sending the seconds hand back to 12 o’clock.

The keyless works under the dial, namely the mechanism that winds and sets the movement, were designed to be both robust and tactile, resulting in a crisp and satisfying action that can be enjoyed through the operation of the crown.

Beyond the new complications, the RRCC02 is a tangibly improved timekeeper that lives up to the “chronometer” appellation. For one, the calibre utilises a newly designed balance wheel that relies on regulating screws instead of circular weights. As a result, it boasts 60% more inertia than the balance of the first edition. Combined with a mainspring that delivers 40% more torque, the RRCC02 offers more stable timekeeping over longer periods.

The RRCC02 is contained within a case produced in-house by Akrivia at the workshop overseen by famed case maker Jean-Pierre Hagmann. Made up of 15 parts, including lugs individually soldered to the case middle, the case has been refined in ways that are significant but subtle over that of the first edition.

The purpose of the redesign was to perfect its overall proportions, resulting in a more harmonious balance between the various elements. That required tweaking every aspect of the case such that, despite the inherited aesthetics, the case is wholly new – none of the component are interchangeable between the two editions.

Amongst the refinements is a sapphire crystal with a more pronounced dome. Another is the geometry of the lugs, a defining feature of the first edition. The gracefully arched lugs were modelled on mid 20th century gentlemen’s watches, particularly those with cases produced by Emile Vichet, an esteemed case maker. They have been elongated on the RRCC02, giving them a more graceful sweep downwards. 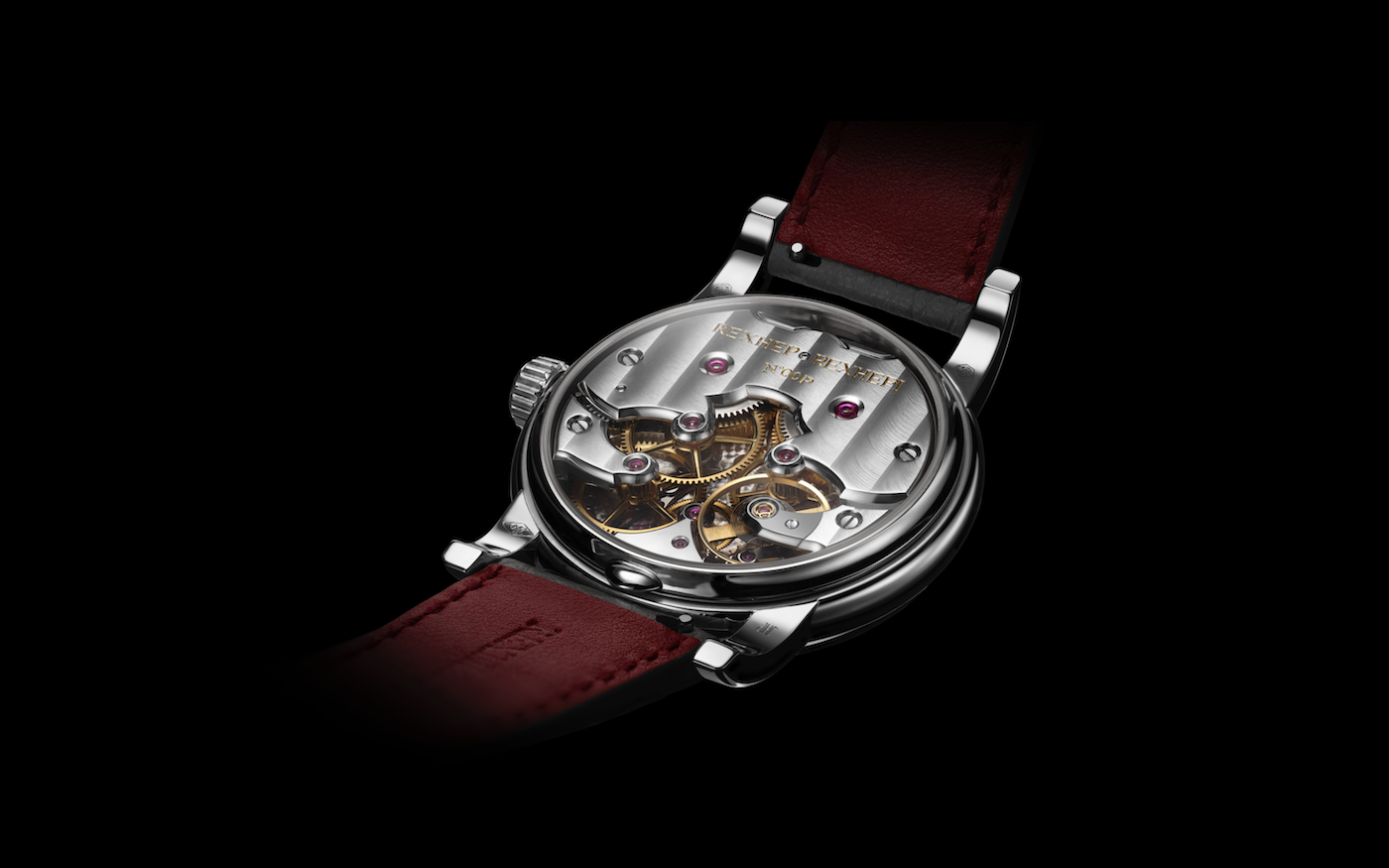