Counterfeiters are increasingly turning their attention to collectible watches, whose prices have skyrocketed. Sometimes all it takes is one tiny detail, which is easy to fake, to treble the price of a watch.

The face of the second-hand watch market has changed somewhat over the last fifteen years. While in the 1990s there were relatively few resellers to share the spoils, the situation is rather different today. And it’s understandable, when one sees the price disparity in the great majority of watches made from 1990 up to the present. This market now has its own little community of collectors and bargain hunters who have come to play in the big boys’ playground. It is not uncommon these days to attend watch auctions whose record sales figures are on a par with those seen at sales of classical or contemporary artwork.

The origin of this turnaround may be found, first of all, in a resurgence of interest by the public. Some watches already considered expensive fifteen years ago have now crossed squarely over into the realms of the frankly unaffordable, or have joined the pantheon of collectors’ watches that are quite simply in a different league altogether. Rather than looking solely at the speculative side of this phenomenon, it is interesting to consider the revolution it has brought about.

Although some people, even today, consider the second-hand watch market to be entirely separate from that of new products, there are clear indicators that this is not the case. In order to flesh out this hypothesis, let us look at some collectible watches that have increased in value, and analyse the influence this has had on the new watch market.

THE RED AND CORNINO ROLEXES

Leafing through auction house catalogues, we can see that what was commonplace fifteen years ago has now become a sought-after commodity. Take a look at the Rolex Submariner and GMT-Master. In both these cases it is now almost impossible to find a bargain, because the prices are virtually set to the nearest penny. Added to this phenomenon is the ‘special model factor’, where particular models are given a special name, such as the ‘Red’ for the Submariner, or the ‘Cornino’ for the GMT-Master 1675. In fact, the Cornino is no more rare than the ‘ordinary’ 1675, despite fetching up to three times as much, for a model that originally sold by the thousands. 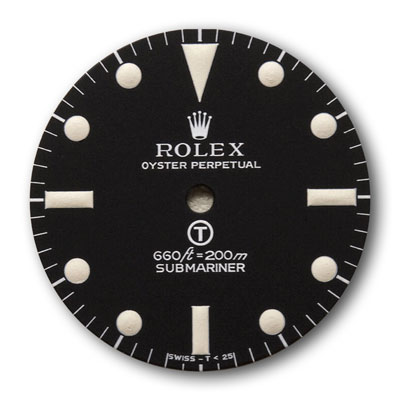 Without wishing to lay any blame at the feet of the collectors, or to decry the ‘creation’ of rare models, it is nevertheless true that from the moment a small detail on a mass-produced watch can make such a huge difference, the door to counterfeiting begins to gape wide open. In fact it is very easy for a counterfeiter to create a specific fake, thereby trebling the potential upside, just by beginning with a regular Submariner reference 1680, for example, which currently sells for between EUR 5,000 and 6,000. What if it could be turned into a ‘Submariner Red’, or a Comex? Or even a particularly prized version specially produced for Qatar? The sky’s the limit.

A vintage watch enthusiast, when considering purchasing this kind of model, would almost always be motivated by the hope of being able to sell at a profit. He will be well aware that the prices of certain models doubled, tripled or quadrupled between 2005 and 2014. What makes these particular models so sought-after? It could be the dial. But there is nothing easier to fake than a dial! And what happens when, five years down the line, the buyer learns that his Red Rolex Submariner is just a fake? If he wants to restore it to its authentic condition he will need to find an original dial, unrestored and with its vintage patina. These days, old watch dials change hands for between EUR 1,000 and EUR 15,000. Investing such a sum in a watch dial, and decreasing the value of the watch in order to make it authentic (replacing the dial with what is known as a ‘service dial’) simply represents a net loss. And any means that there may be of gaining redress for this kind of fraud would also add considerably to the final bill.

There are dozens of similar examples. Many have paid the price, some very dearly. Anyone who has been scammed with a dodgy Submariner will recover relatively quickly, but when it’s a so-called Comex, or a Daytona Paul Newman, that’s another matter entirely. The bill can mount up pretty quickly.

THE COLLECTIBLE WATCH MARKET IS FLOODED WITH FAKES

So, fakes are not just a problem for the contemporary watch market. The most prized models have seen their prices rise, some of them very impressively. And to the great astonishment of all concerned, they do not look likely to fall any time soon. But the collectors’ watch market has started to become polluted with counterfeit pieces, and the phenomenon is spreading like an oil slick. It’s quite an achievement these days to find an authentic Tudor Marine Nationale.

It has also become practically a full-time job just keeping up with the collectible watch market. All it takes is for a particular model to have a record sale, and prices across the market are completely skewed. Let’s look at one well-known example: Jean-Claude Killy’s Rolex was sold for nearly 650,000 dollars by Sotheby’s in 2013, on the high side for a watch considered to be worth around EUR 160,000 on a good day. A few weeks later it was impossible to pick one up for less than EUR 250,000. Another factor, the condition of the watch, is also beginning to lose its importance. Some buyers these days are prepared to jump off a cliff for an oxidised dial. It’s a complex situation. But how can you be sure of getting good value in a marketplace where fakes are becoming endemic? The solution is to withdraw, regroup and don’t jump head-first into a sale without doing your homework. It is far better to think things through, and learn what has become almost a profession in itself. 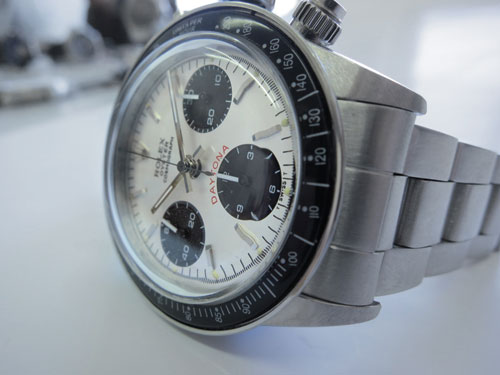 Counterfeit of a Rolex Daytona Ref. 6263

Some watches are relatively easy to fake, and the reason is simple. Often, what makes a model rare is some visible detail: typography (characters used on the dial), a production error in a particular year, colours, logos, etc. Also, given that a watch consists of just a case, a dial, a strap, hands and a movement, there’s not a lot to it. The most banal example we can think of is this: Rolex apparently (according to ‘experts’) produced a series of GMT-Master models for the army. Which army? Some will say Peru, others might say Argentina, Saudi Arabia, or even Italy. But consider this: no record or document discovered to date has identified the origin of these models with their full blue bezel. While these watches look superb, particularly when the hour markers are nicely oxidised with a brassy patina, we are bound to point out that the model is rare, and that makes it very expensive. Today, we can find regular Rolex GMT-Master ‘Blue Bezel’ models going for over EUR 10,000. What’s the problem, you might ask? Well, the only thing that makes this 1675 ‘very rare’ is its blue bezel. And a counterfeit blue bezel can be sourced on the black market for under 50 dollars. In conditions like these it’s not easy to know what to do.

So it is a very real problem. The situation would be quite different if it was about pure watchmaking details, such as the mechanism or a given complication, but that is not the case. Today, the high ground is occupied by a maximum of three brands. It is therefore more essential than ever to learn something about the subject before making hasty purchase decisions.

Would you like to know more about the second-hand watch market, and learn how to recognise genuine models with the aid of technical resource materials? Real and Fake Watches by Fabrice Guéroux is available from Watchprint Editions – www.watchprint.com.