he art of jewellery developed in France in the 17th century. At that time, goldsmiths and silversmiths were tasked with enhancing the brilliance of cut precious stones by setting them on jewellery. The difficulty of this work lay in ensuring the stones were anchored securely while at the same time letting light pass through them. 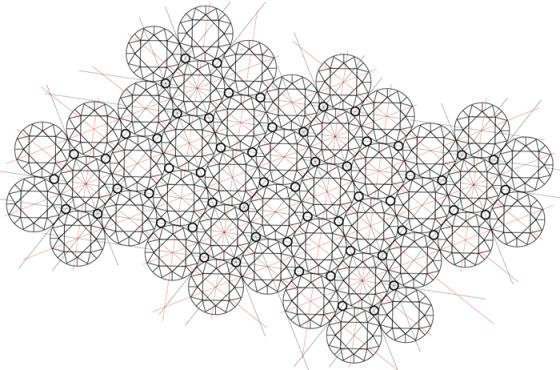 Various mechanical techniques were developed to respond to the need to eliminate gluing and soldering. In the first case, the risk of a stone falling out was too high. In the second, thermal shock could damage the stones. The art of gem-setting consists in cutting a seat into which the stone is to be placed. After the stone is placed into this seat, metal is then folded over it.

In theory, any part of a watch can be set, whether it’s the case, crown, hands, bridges, plates or, of course, the dial. The limits are essentially practical and are determined by the material into which the stones will be set. But here, too, there has been progress in recent years. Whereas gem-setting was generally restricted to precious metals, it has started to appear on much less traditional materials, such as carbon fibre (Hublot in 2014 and more recently Richard Mille).

Gem-setting is even becoming increasingly associated with digital technologies. For example, the company MW Programmation has recently started training gemsetters in how to automate the preparatory phase and quickly set a stone intoany solid material. It may have begun as artisanal work, but gem-setting, just like watchmaking more generally, has not been able to outrun automation! 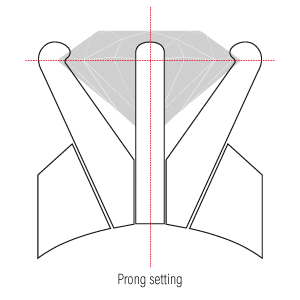 PRONG SETTING involves tightly holding the stone between several metal prongs, the size and shape of which can vary considerably. This technique is rarely used in watchmaking. In addition to a lack of space, it is also rather too fragile for an object that is worn every day and is thus likely to be subject to impacts.

BEAD SETTING a technique similar to prong setting, is used by certain watchmaking brands for round paved stones. In this case, the gemsetter works on a metal strip, drilling it with the help of a tool, thereby raising beads that will be used to keep the stones in place. Two beads are enough, in principle, to set a stone. But if there is enough space, the gem-setter can raise more, with some serving a decorative function between the stones. 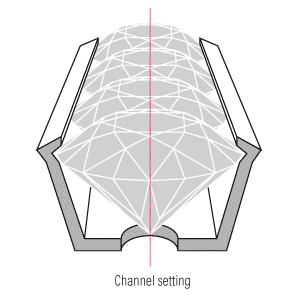 CHANNEL SETTING is a technique commonly used in watchmaking. The stones are set between two parallel grooves in such a way that there is no space between them. In order to obtain best results, leaving as little material visible as possible, the stones must often be re-cut.

SNOW SETTING was developed by Jaeger-LeCoultre around fifteen years ago and is a way of giving a unique look to each watch. Diamonds of different diameters are placed side by side. These differences make it so that no two pieces can ever be exactly alike.

MYSTERY SETTING also known as invisible setting, was patented by Cartier in 1933 and trademarked by Van Cleef & Arpels three years later. This technique involves using round stones with grooves that can be slid onto the metallic mount. These grooves are arranged in such a way that the mount is hidden within the stones. This essential technique requires years of training to master.

ILLUSION HEAD SETTING requires the diamonds to be held in place by prongs set directly into the jewellery piece, and then folded over the diamonds, which are themselves embedded in the mount. 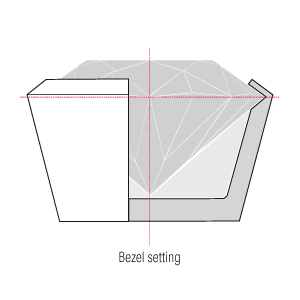 BEZEL SETTING is certainly the oldest and sturdiest setting technique for gold jewellery but is rarely used in watchmaking. The diamond is secured in place by surrounding it with a thin gold plate, which is folded over the length of the perimeter of the stone bymeans of a reciprocating hammer. Although aesthetically pleasing, this technique reduces the visibility of the stone, which some consider to be a flaw.

BURNISH SETTING is similar to bezel setting, but here the diamond, which is usually brilliant cut, is completely embedded in the metal. The exterior metal is then folded over by means of a reciprocating hammer.

BAGUETTE SETTING is probably the most complicated. Depending on the piece, calculations are made at the level of microns. Seats are prepared so that the stones can be placed perfectly. A burin is then used to create burrs along the length of the stones. These burrs serve the purpose of keeping the stones in place. The final step is hammering, which is done to flatten the metal against the stone.