There are many things that one can do and see in Hong Kong and each and every trip there brings an abundance of fresh discoveries. It might be a new restaurant (strangely enough there is glut of Chinese eateries– but not so many takeaways, that must be an Anglo-Saxon feature), a new prestigious corner site for a McDonalds (Hong Kong has to have the greatest per capita / McDo ratio in the world), new cloud-scraping landmarks (Hong Kong builders have to be the world’s fastest - and they still use bamboo scaffolding for the skyscrapers), captivating luxury shops (Hong Kong remains a wonderfully magnetic duty free zone). The list is endless.
However, Hong Kong is also fascinating because of the local use of the English language and the people you meet there.

Signs
Now don’t misunderstand me, I’m not knocking the locals for their linguistic failures, if the truth be known I would like to have the same level of understanding of their language as they have of English. However, being succinct on a sign is not simple – as many English and Americans will avow. Having said that – on with the story.
As is my wont, one evening after the Hong Kong Watch & Clock Fair, I made my annual visit to the Temple Street night market. It is here that you can find some wonderfully inexpensive gifts and a fake of nearly everything from a calculator to a Rolex and a Ralph Lauren shirt to a Louis Vuitton handbag . This year, as the humidity slowly enveloped me like an overpoweringly warm, wet blanket, I entered into a small supermarket and took a bottle of refrigerated mineral water from the drinks display. Whilst waiting to pay I noticed a small self-explanatory sign on the counter: ‘For your convenience, we recommend courteous and efficient self-service.’ 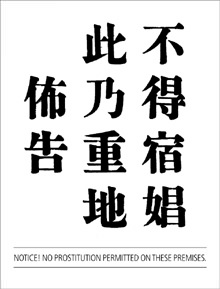 A smile or two later and after having sidled into many a shop doorway to benefit from the air-conditioning, I turned into nearby Nathan Street. For those of you who have never visited Hong Kong, it is abound with camera and computer shops, genuine watch and jewellery stores, street traders selling ‘real’ Cartier, Gucci and Panerai watches, androgynous creatures offering foot and other body part massages, clothing emporiums and tailor’s shops. I stopped to look into one of the latter in a very unwelcoming alley and noticed that in addition to all the credit card signs on the door there was a magnificent printed notice beside the open panel stating that ‘Ladies may have a fit upstairs.’
Being neither a lady nor epileptic, I moved on to discover nearby a mass of business plaques on the wall of a building. Amongst the importers, exporters and travel agents there was a plaque for a group of dentists that religiously extolled their talents: ‘Teeth extracted by the latest Methodists.’
Having exhausted myself from the long hike up and down the road, I decided to stop for a late evening Schweppes tonic water (with just a little dash of gin) in an elegant bar. It was particularly quiet and as I looked around, the reason was there for all to see. A carefully printed notice enclosed in a clear plastic support on the counter read, ‘Ladies are requested not to have children in the bar.’
The following day, having soaked a few shirts with humidity, I decided to drop them off at a Chinese laundry that I had seen on my walkabouts. They clearly catered for non-Chinese speaking visitors since a large sign in the window read: ‘Ladies, leave your clothes here and have a good time the rest of the day.’
I left in tears.

People
I once again took the funicular railway up to The Peak, Hong Kong island’s highest point. Here you can enjoy the breathtaking panorama and whilst I was doing just that, a charming lady stopped alongside me, oohed and aahed for a moment at the spectacle and without further ado, turned to me and, in her unmistakable southern drawl, declared “I’m American. I must apologize for President Bush!”
I also met U. Hueng Loe, my Chinese acupuncturist, who had a body-piercing stall in a market where he was trying to earn enough money to get back to Geneva, and my special watch designer friend, the Mad Monk. But I’m out of space, so I’ll leave them for another occasion.
And they say that travelling by plane is a way of seeing less of more. Hah. Don’t you believe it!