“Be not suspicious towards all, but be cautious and firm.” Democritus

The influx of smartwatches from Apple and other international electronics giants is forcing the watchmaking industry to undertake an uncomfortable but no doubt salutary exercise in perspective. By encroaching on what we have always regarded as ‘our’ turf, Silicon Valley is sowing discord in Watch Valley.

And in the background, a bigger question about the future of the watch looms: what will watches be like in the future, in 2050 and beyond? Will new communication technologies feature in their design? Will some sort of ‘hybridisation’ eventually take place? Or will luxury mechanical timepieces continue to coexist with cheaper ‘connected’ watches, as they do today? After all, streaming has not killed off cinema (although it has decimated video rental stores), any more than the internet signalled the demise of paper – as we at Europa Star well know!

In launching its watch, Apple barely attempted to hide its indifference to the venerable mechanical watchmaking industry. According to the New York Times, its senior designer, Jonathan Ive, did not mince his words when speaking about Switzerland’s future as the centre of watchmaking. It appears that, through an ‘unfortunate’ combination of circumstances, many high-tech gurus have come to view the wrist as the new El Dorado for the latest wearable technology. But while arch-rival Samsung modestly christened its new wrist-mounted gadget the ‘Gear’, Apple bypassed the simple ‘wearable’ to glorify its offering with the title ‘Watch’. How presumptuous…! 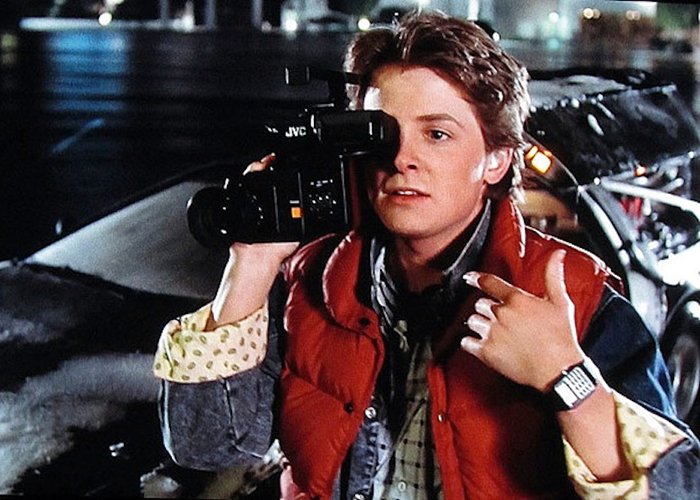 Marty McFly in the movie ‘Back to the future’

The Californian giant clearly has one particular niche – that of the sub-500 franc fashion watch – in its sights. It would be foolish to meet disdain with denial. Swatch will be bringing out its fitness watch next year; groups such as Festina have announced in our pages that they are developing smartwatch capabilities. Fossil is joining forces with Intel and Google. The next Baselworld will be a barometer. Behind the facade of studied insouciance, a flurry of initiatives are taking shape backstage. Some false starts and dead ends are inevitable but necessary. As the Swiss Centre for Electronics and Microtechnology recently noted, many technologies that facilitate connectivity were invented and patented in Switzerland. A little like quartz, back in the day... But let’s not reawaken those memories!

Some time ago now, Swatch Group decided to join forces with a prestigious industrial player to launch an innovative new product. You may remember it: they called it the ‘Smart’…

Over the centuries the watchmaking world has continually reinvented itself by absorbing new technologies and new materials, albeit unwillingly. It must not let itself down this time. Perhaps it has made the right choice by refusing to be rushed into anything, or at least by giving that appearance... These devices with their faintly gimmicky air have a short lifespan. Do we really want to be permanently connected, at the mercy of peremptory alerts from our wrists?

Given the short horizon of the smartwatch, what we really need – aside from the knee-jerk reactions we can expect to see next spring – is a thorough and level-headed evaluation of the issues. The real question is this: will the quality watchmaking sector, the beating heart of ‘mechanical value’, which is not directly impacted by Apple today, dare one day to ally itself with the new technology for digital connectivity, to create more subtle and elegant functions than merely counting calories (which could be distracting during a business lunch...)? Some time ago now, Swatch Group decided to join forces with a prestigious industrial player to launch an innovative new product, the result of ‘thinking outside the box’. This diminutive newcomer successfully put the bigger boys on the back foot. You may remember it: they called it the ‘Smart’…

*A note to our faithful readers: the Editor-in-Chief Pierre Maillard will also be back in the future, for the next issue.