THE B01 FROM BREITLING

The history of Breitling, as we know, rests mainly on precision watches and the chronograph. As an example and small reminder, it was Breitling that invented the two independent pushpieces that became the norm for modern chronographs, that of the activation pushbutton in 1923 and that of the return-to-zero button in 1934.
Breitling has also moved ahead in the domain of the movement, having anticipated the clos-ure of the ETA ‘faucet’, especially that of the Valjoux 7750. To get an idea of the brand’s early strategy to create its own chronographic movement, we need to go back to 1997 when Breitling acquired Kelek, the renowned specialist in modular chronographic mechan-isms and principal supplier to the brand in this segment. Becoming ‘Chronométrie Breitling’, this fully integrated entity has supplied the design tools that allowed for the development of the B01.
From the beginning, this movement was designed for production on an industrial scale in large quantities. The design thus integrated not only the internal architecture and the construction of the movement but also the production methods for tens of thousands of pieces. It is estimated that the production tool located in La Chaux-de-Fonds has a capacity of approximately 50,000 B01 movements per year. All of Breitling’s movements are subjected to COSC certification and in 2009, the brand certified 68,687 mechanical watches and 39,533 quartz watches. This places Breitling in third place after Rolex with 607,512 COSC-certified watches and Omega with 187,558. (Note: In 2009 there was a global decline of 27 per cent in the number of pieces certified by the COSC compared to 2008.) 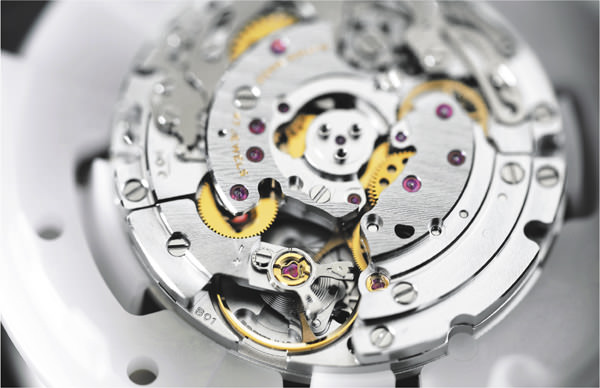 Simplify production, streamline after-sales service
The industrial demands have thus dictated the construction and certain specifications of the B01 automatic chronograph calibre in order to facilitate both the production and the after-sales service maintenance—in addition to its intrinsic performance and reliability.
In this regard, a new patented self-centring device for the return-to-zero hammers exempts the watchmaker from having to intervene manually on each movement in order to precisely adjust this function. An apparently modest development, but when combined with many others, it allows the brand to gradually optimize its production. A certain number of changes have also been made for the wearer, such as an exclusive special regulator as-sembly that allows the watch to be adjusted according to the type of wearer (since we know that the watch of a very active person does not react in the same way as that of a mainly sedentary person). Also for ease in usage, the instantaneous calendar of the B01 can be corrected at any time, without running the risk of damaging the movement.
The production chain (currently installed in a 6,000 square-metre facility), drawing inspiration from other industrial sectors, is totally commanded by software that automatically shuttles the movement during assembly to the next station where it undergoes either an automatic operation or a manual intervention.
Five years of development (and millions of francs of investment) have allowed Breitling to not necessarily reinvent the wheel—the lovely B01 is a traditional integrated automatic chronograph with column wheel and vertical coupling, beating at 28,800 vibrations per hour, with an excellent power reserve of 72 hours—but to attain a certain degree of autonomy, thus guaranteeing its independence for the tumultuous years to come, especially in the domain of the movement.

The landscape in terms of movements is in a great period of development and expansion, thus making it nearly impossible to look at everything happening now (unless we devote the entire magazine to this topic). We will come back to this subject in our next issue, Europa Star 6/10, and conclude our vast investigation with a third series on what is taking place in the realm of haute horlogerie and speciality timepieces. In particular, we will examine: Aghenor (Atelier Genevois d’Horlogerie), creator of many complications and especially retrograde displays; Christophe Claret, the reference in the field of high complications; the Concepto Watch Factory and various watchmakers such as the Artisans Horlogers (Laurent Besse) who participated in the development of the Mémoire 1 by Maurice Lacroix.