The Original from Glashütte


If you believe that fine watches necessarily need to come from Switzerland, then you are mistaken. The small hamlet of Glashütte near Dresden in eastern Germany is home to the Glashütte Original manufacture, where mechanical masterpieces are made.

The Original from Glashütte

If you believe that fine watches necessarily need to come from Switzerland, then you are mistaken. The small hamlet of Glashütte near Dresden in eastern Germany is home to the Glashütte Original manufacture, where mechanical masterpieces are made.

Who in Switzerland would have thought at the beginning of the nineties that one day the Swiss watch brands might face serious competition from Germany? Until then, Germany had been a reliable exporter of cheap quartz clocks and ultra-precise radio-controlled watches. The field of fine mechanical watches, however, had been left to the Swiss alone. With the German reunification in 1990, however, memories came back that near Dresden there had once been a small town with a watch industry that, in its heyday, had been comparable to that of La Chaux-de-Fonds.

Making watches to fight poverty
We are talking about Glashütte, about 50 kilometres east of Dresden, a town in the shape of the letter “T” due to the two valleys of the Priessnitz and the Müglitz rivers that meet there at right angles. The name Glashütte has nothing to do with glass, but derives from the silver ore that had been found and processed there in earlier days. When the mines were exhausted in the middle of the 16th century and neighbouring countries started to offer cheaper ore, Glashütte and its surroundings were hit by severe depression. Unemployment and hunger spread. It was only in the 19th century that help came from the city of Dresden. It arrived in the shape of a watchmaker. Ferdinand Adolf Lange (1815-1875) had completed his apprenticeship with the watchmaker of Dresden’s court, Johann Friedrich Gutkaes, then took to the road and perfected what he had learnt with Josef Taddäus Winnerl in Paris. Upon his return he married his master’s daughter and applied to the state proposing that he might be able to help Glashütte by establishing a watch industry there. To his surprise he received a grant, and went on to teach unemployed farmers and miners to become watchmakers. The fact that Lange actually succeeded in making watchmakers out of his “students” must still be regarded as a miracle. He even encouraged them to become entrepreneurs by founding small enterprises producing spare parts.
In the course of the years some of the subcontractors developed into watch brands that competed with each other and Lange’s own company, F. A. Lange & Söhne, pushing quality ever higher. Among them there was one brand that simply had “Glashütte Original” embossed on its dials. But World War II brought prosperity to a halt. The watch industry was forced to produce instruments for planes and time fuses for bombs. That is why Glashütte’s watch industry was destroyed toward the end of the war by a devastating Soviet air raid. The post-war rebirth of free enterprise was stopped again by expropriation through the SED-regime in 1951. 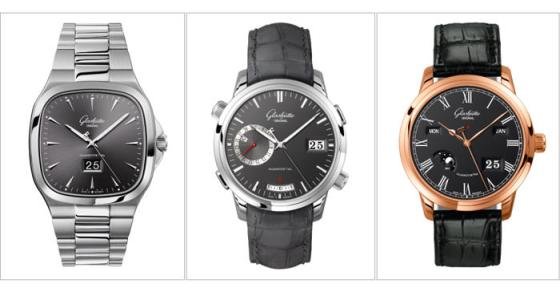 Phoenix from the ashes
For forty years the VEB (Volkseigener Betrieb or “people-owned enterprise”) Glashütter Uhrenbetrieb had produced cheap watches for the communist market. It had developed its own quartz calibre and an automatic movement, the Spezimatic. After the fall of the Berlin Wall, the company’s entire infrastructure, including an ugly building from 1989, was put up for sale. It was the Bavarian businessman Heinz W. Pfeifer who recognised the potential of this factory that contained the machinery and the workforce to produce movements from scratch. In 1990 he bought the complex and revived the name Glashütte Original. In the company’s registered name Glashütter Uhrenbetrieb GmbH the spirit of the GDR continues to resound. Its marker “GUB” is still found engraved in the base plates of the movements. In the course of only a few years Pfeifer turned into reality his dream of an autonomous manufacture producing watches with the traits that to him were typically German. His watches had to be heavy and edgy, just like German cars had been in the seventies. To the delight of collectors, in 1996 Pfeifer revived another brand whose name he had bought with the package: Union Glashütte. These watches were cheaper in material and make, but they contained exclusive manufacture movements, otherwise only found in Glashütte Original watches.
In 2000 the Swatch Group bought Glashütte Original in the shadow of the battle for Les Manufactures Horlogères (IWC, Jaeger-LeCoultre and Lange). Pfeifer remained CEO until he was replaced by Frank Müller in 2002. In 2008, Müller was replaced by Günter Wiegand, who had been with the brand since 1982 and had thus seen most of its ups and downs.

A true manufacture
The manufacture is characterised by its high production intensity which can be seen in the great variety of in-house movements that all bear the typical Glashütte characteristics: the ¾ top plate instead of separate bridges, swan’s-neck adjuster, gold settings and, in some cases, hand-engraved cocks for the balance-wheel. When touring the production workshops with visitors, Günter Wiegand invariably reminds them to “count the lathes and milling machines, and tell me if you see a similar quantity in any other manufacture”. Apart from the regulating organ every movement component is produced here, even the screws and gears. Being a part of the Swatch Group of course helps getting the missing components like balance springs, balance wheels and escapements. In many cases the dials, which are made with great care, are equipped with the so-called “Panoramadatum”, a patented king-size date which is Glashütte Original’s answer to Lange’s big date.

Wide range of models
As opposed to Lange, Glashütte Original offers a wide range of different models and prices. From an attractive entry line with stainless-steel cases to highly complicated watches, some of which are lushly set with gems, Glashütte Original offers models for any budget and taste. The company’s master watchmakers are particularly proud of one of their specialities: the flying tourbillon developed according to plans drawn up by Alfred Helwig, a local watchmaker responsible for many revolutionary inventions of the thirties and forties.
Since the takeover by the Swatch Group the original lines have been subject to a gradual facelift, making them fitter for an international market. New lines have been added, of which the “Sixties” is especially noteworthy because it recalls some of the models produced in the GDR era.
To the dismay of some collectors the name “Union Glashütte”, together with its affordable models, disappeared soon after the Swatch Group had taken the reins at Glashütte Original. It only re-emerged in 2008, completely re-designed and equipped with modified ETA-calibres that are assembled in Glashütte.