MB&F – “In watchmaking, there are not enough egoists” [Video]


MB&F – “In watchmaking, there are not enough egoists” [Video]

Art or design? Art or artisanal? What differentiates a work of art from a design object? Where is the boundary? To find answers to these questions, we talked with Max Büsser, the founder of MB&F, in a place that is known for blurring the borders, the M.A.D Gallery. MAD stands for Mechanical Art Devices, while Gallery refers to the first boutique opened by MB&F, in Geneva. The M.A.D Gallery sells the brand’s famous Horological Machines and Legacy Machines, but it also exhibits other very unique mechanical works and photographs from around the world. One example is the extraordinary motorcycles created by the Japanese designer Chicara Nagata.

So, is it art or is it design?

“Art exists in an egoistic dimension,” affirms Max Büsser, “while design is in an altruistic dimension. In other words, an artist ideally must not think about pleasing others, but only about expressing what he has in himself. A designer, on the other hand, must think of others, of the use that they will make of his creation. In the beginnings of watchmaking, the artistic part was important in terms of decoration and the actual invention. Then came industrialisation and the watch turned into an object for the masses. But, since the 1970s and the appearance of the quartz movement, mechanical timepieces have become technically obsolete. We can thus state categorically that, from that moment, the mechanical watch should only be created as an art object, either as a one-of-a-kind creation or as a series, as artists do. But, alas, there are not enough real egoists in the watch industry, meaning people who think not in terms of the market, but rather and above all about themselves, about their own creation, without being worried if they please or don’t please. All the ‘designers’ exhibited in this gallery have in common this egoistic approach. They are thus artists.”

So, can we classify MB&F in this category?

“From our first steps,” Max Büsser continues, “we have sought to create in an ‘egoistic’ manner. Our approach has nothing to do with any type of market study, but is the result of a much more personal and intimate introspective research. When, for example, we introduced the very extreme HM4 Thunderbolt, we asked ourselves ‘who is going to be able to buy this thing?’ And, while it succeeded well beyond our expectations, it was not because of any calculated effort, but rather because it apparently ‘spoke’ about itself, it ‘touched’ the sensibilities of many people. Like a work of art does.” 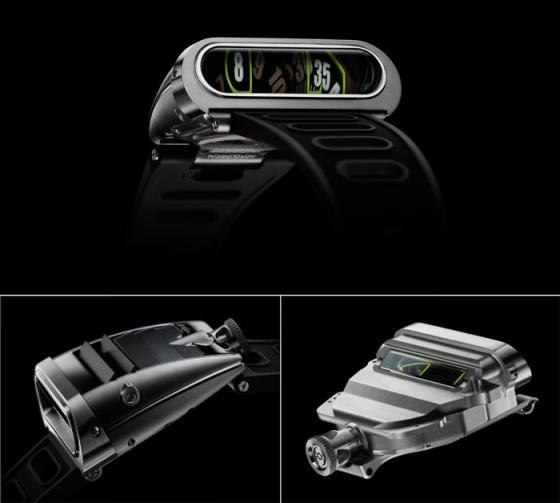 The new “egoistic” machineWe find this lack of a calculating mentality in the process involved in creating MB&F’s new “machine”, the HM5, which brings together two distinct worlds. “Let’s look at the 1970s,” adds Büsser. “At that time, if someone had asked the question ‘what will you be wearing in 2012?’ no one would or could have predicted the mechanical neo-classicism in vogue today. We were sure that people would be living on the moon and that they would be wearing electronic machines on their wrist, devices that would represent a complete rupture with the canons of traditional timekeeping. Since I have always been fascinated by the futuristic lines invented during this period, which we find, for example, in cars such as the Lotus Esprit designed by Giugiaro, the Lamborghini Miura, and the Lancia Stratos designed by Bertone, I decided to look at the most innovative watch designs of that epoch. I noticed that brands such as Girard-Perregaux, Bulova and Mido had de-signed pilot’s watches with streamlined cases and slanted dials, that could be set back to facilitate reading the time in bright light. Among these brands, Amida—which quickly disappeared—had created the Digitrend, a totally hybrid watch whose simple mechanical movement (a Roskopf) powered the fake LED made of plastic! The HM5 ‘On the Road Again’ is inspired directly from this timepiece.” 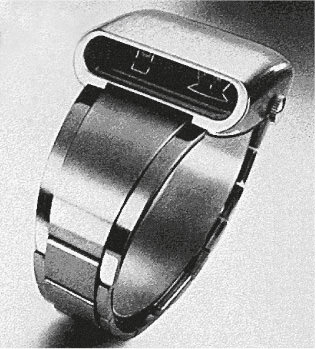 As if it drove right off the pages of the 1970s, the HM5 ‘On the Road Again’ evokes all the design codes of the supercars of the period: angular lines, rear spoilers, low-slung exhaust systems… But these characteristics are not just an allusion by the designer (Eric Giroud), they have a function. The spoilers can be raised up thanks to a sliding pusher situated on the side of the case. In this way, they let light into the inside of the case, light that will charge the Superluminova numbers located on two discs, which are placed flat under the spoilers. Yet, these numbers are displayed vertically in the groove—the “dashboard” if you will—of the case crafted in zirconium. To succeed in this endeavour, a sophisticated and highly precise optical glass was specially developed in the form of a reflective prism made of sapphire crystal that bends the light 90 degrees and magnifies the numbers by 20 per cent. Also useful, the role of the two small exhaust systems is to remove the water that could enter by the partly-opened spoilers.

In this miniature chassis, we find a second case, a sort of complex casing that ensures the water-resistance of the movement. Developed on a Sowind (GP) base, by the constructors Jean-François Mojon and Vincent Boucard of Chronode, this automatic movement features bi-directional jumping hours (thus adjustable in both directions) and minutes. It can be viewed through the transparent sapphire crystal case back.

To sum up, is this an “egoistic” or an “altruistic” watch? Is it an artist’s watch or a designer’s timepiece? The very recent Public Prize of the Grand Prix d’Horlogerie in Geneva, which was given to MB&F’s Legacy Machine 1, demonstrates that the public sometimes votes for an “art object” designed “egoistically” by big kids inspired by their superheroes or by Jules Verne.

Physical travel may have been interrupted, but we have never calculated so many time zones from home, what with all the Zoom meetings and remote sessions. (...)