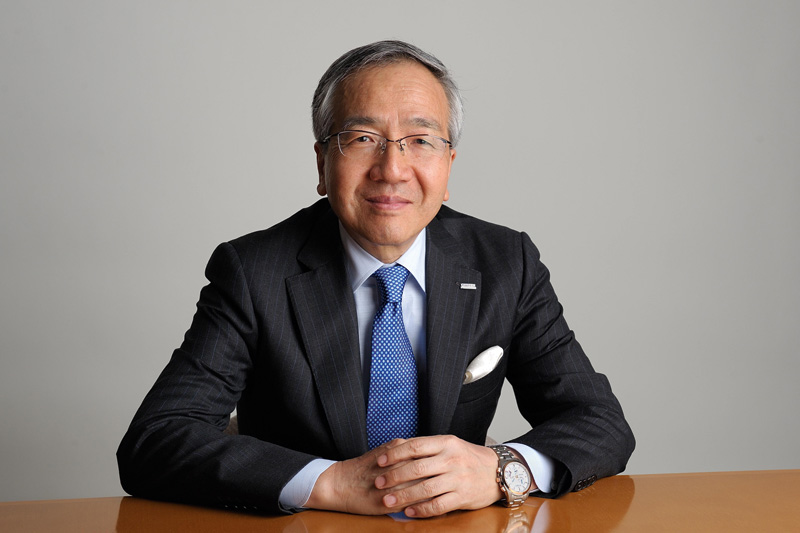 Last November, in an interview with Citizen Holdings Company CEO Toshio Tokura at Citizen headquarters in Tokyo, I asked if Citizen was interested in acquiring another Swiss watch brand. He said he was. “An acquisition of a particular established Swiss brand is something that we are thinking about.”

The brand on Tokura’s mind, we know now, was Frédérique Constant. In May, the Citizen Group announced that it had agreed to buy Switzerland’s Frédérique Constant Holding SA, owner of the Frédérique Constant, Alpina and DeMonaco brands, for an undisclosed sum. It’s the second time in four years that Citizen has bought a Swiss watch company. In 2012,  Citizen surprised the watch world with the purchase of Prothor Holding SA, owners of the mechanical movement manufacturer La Joux-Perret and the Arnold & Son brand for ¥5.76 billion (equivalent to $60.5 million at the time). Including its purchase of U.S.-based Bulova Corp. in 2008, Citizen has added 7 foreign brands to its watch portfolio in eight years ( Bulova, Wittnauer, Caravelle New York, Arnold & Son, and the three FCH brands). The foreign-brand buying binge is a sign of changing times at the Citizen Group, whose revenues totaled ¥348.27 billion ($2.9 billion) in the fiscal year ended March 31. The architect of those changes is Tokura. Since becoming president and CEO of Citizen Holding Co. in April 2012, he has initiated what he calls “drastic” changes that are transforming the group’s watch business. Among the highlights:

Tokura’s strategy seems to be working. Citizen timepiece sales have risen 29.9% over the past three years to ¥181.2 billion ($1.5 billion) in the fiscal year ended March 31. Once again, timepieces are Citizen’s most important product, representing 52% of total revenue and 67% of operating income.

That’s a big change from a decade ago, when watches amounted to just 34% of group sales, behind electronic products and devices at 45%. While best known for watches, Citizen is a giant, diversified industrial group, with five distinct business units, 129 companies and more than 21,000 employees. But, Tokura acknowledges, “As a group, we didn’t have a direction. We were unclear about which business to focus on. We needed to clarify what our portfolio is.” Tokura took care of that. “I told everybody that watches are the most important business for us as Citizen Group. That’s the first message I delivered.”

But he had concerns. “Looking at the watch business over the past 20 years, we didn’t see much growth,” he says. “We needed to solve that.” Tokura and his team identified two major opportunities to expand their watch business. One was to boost the image and sales of its core Citizen brand. The other was to take a share of the luxury-mechanical market by acquiring Swiss brands. 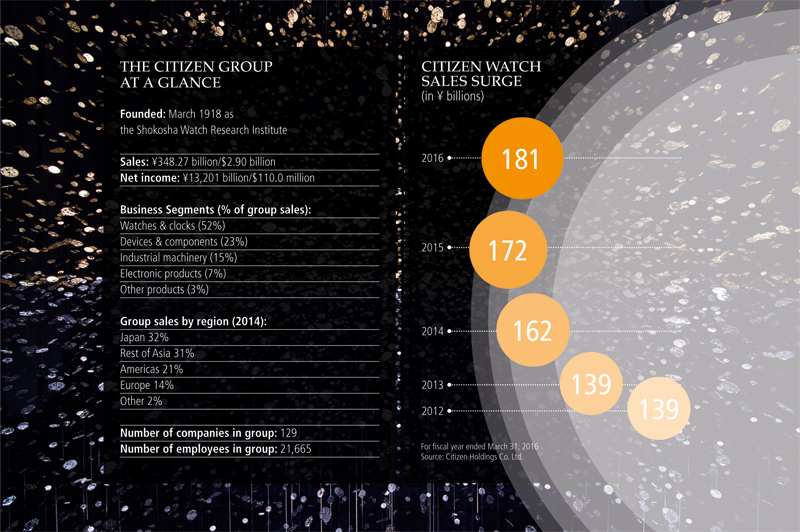 I. ECO-DRIVE ONE, THE NEW POSTER WATCH

At Baselworld this year, Citizen unveiled a stunningly thin new watch called Eco-Drive One. With a case thickness of 2.98 mm, it is the world’s thinnest light-powered analog watch. It marks the 40th anniversary of the launch of Citizen’s proprietary Eco-Drive quartz technology, which uses natural or artificial light to generate electrical energy to power the movement, eliminating the need to replace the battery. 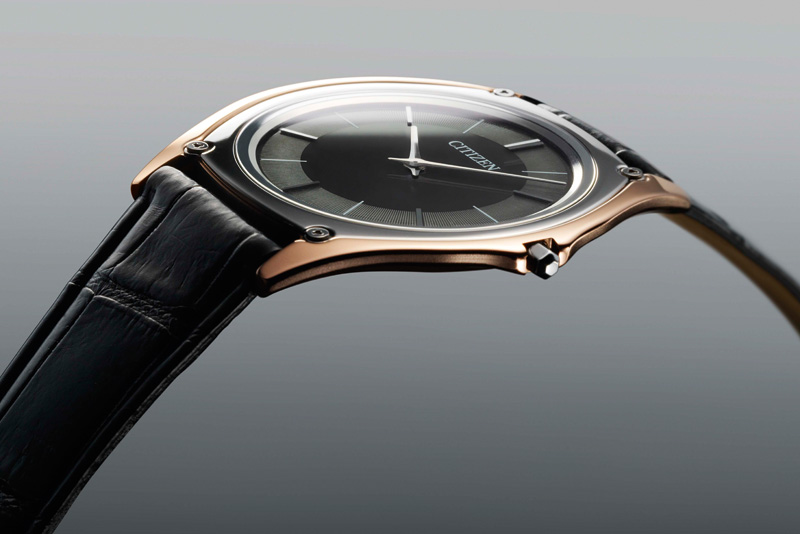 Citizen Eco-Drive One is the world’s thinnest light-powered analogue quartz watch with a 2.98mm case and 1.00mm movement. In spite of its thinness, Eco-Drive One runs 10 months on a single full charge by successfully reducing energy consumption.

Eco-Drive One is the poster watch for a new direction for the Citizen brand, blending beauty and technology. “This watch is all about beauty,” Tokura says. “But it is Eco-Drive technology and surface-coating technology that allows us to make the watch more beautiful.” Its Eco-Drive movement is 1.00 mm thick; to get it that thin, Citizen redesigned almost every part of the movement. To create the ultra-thin case, Citizen turned to new materials like cermet, a composite of ceramic and metal. The bezel is made of a binderless cemented carbide, which has superior hardness and resists oxidation. (The cermet case is on the limited version of the watch, priced at $6,000. A non-limited version with a steel case treated with Citizen’s own surface hardening technology called Duratect costs $2,600.) “Basically, a watch has to be beautiful,” Tokura says. “Technology exists to enhance beauty. That’s how we define it.”

That’s a shift for the Citizen brand. Citizen became a powerhouse in the high-volume, affordably priced watch segment on the strength of its advanced quartz technology like Eco-Drive (launched in 1976), radiocontrolled atomic technology (1993), and Satellite Wave technology (2011). Historically, at Citizen, technology trumped aesthetics. That attitude has changed in recent years, Tokura says. “Around 2007, we started talking about the integration of technology and beauty as a product policy. Yes, we are proud of our technology and precision. But we have this other strand of beauty, and we’re trying to combine the two. We are really focusing to make sure the beauty comes out.” Tokura hopes that products like Eco-Drive One will improve the image of the Citizen brand. He notes that the brand is known around the globe, distributed in more than 100 markets; 70% of sales come from outside Japan. “But it doesn’t feel like we’re presenting a consistent image to the world,” Tokura says. “We need to elevate the level of the brand and have a really consistent image across the board.”

Tokura describes Citizen as “the big driver to change our watch business.” But he understands that Citizen can carry the group only so far. It is not a luxury brand. Its strength is in the $300 to $1,200 price range (with a few special models priced higher). Above $1,200 is the domain of Swiss mechanical brands. “Beyond that,” Tokura says, “another brand will take over.” That would be Frédérique Constant.

In the Citizen Group’s annual report for 2012, the company explained why it purchased Prothor Holding. “Demand for premium Swiss-made mechanical watches is expanding, particularly in China and other emerging markets,” Citizen  said, “and we believe that participating in the premium luxury segment of the watch market is essential for the company to achieve its growth strategy in the watches and clocks segment.”

With La Joux-Perret and Arnold & Son, Citizen tiptoed into the world of luxury mechanicals. Arnold & Son, an obscure, small-batch producer of high complication watches, was an add-on. What Citizen really wanted was La Joux-Perret. “The mechanical watch technology – that’s what we were interested in,” Tokura says.

For two reasons. First, to protect Bulova. Citizen had purchased the American brand in 2008 to give itself a dominant position in the mid-range of the U.S. market. Bulova happens to have a collection of Swiss-made mechanical watches. When ETA, Switzerland’s dominant movement producer, announced its intention to restrict sales of mechanical movements to third parties, Citizen worried about securing movements for Bulova and began shopping for a Swiss movement producer. La Joux-Perret solved the problem. It also gave Citizen the chance to revive its own outdated mechanical watch technology. Citizen has produced mechanical watches for nearly a century. However, since the quartz revolution, it has focused primarily on electronic watches.

“Our mechanical technology is quite far behind because we stopped developing it,” Tokura says. “We have a lot of catching up to do. There are a lot of things we can learn from the Swiss.”

Prothor gave Citizen a toe-hold in the premium luxury market. The next step, Tokura told me, was to “buy a Swiss brand to really give us a footprint in that price range.” Frédérique Constant does that. The company, founded by Peter and Aletta Stas in 1988, is a leader in the so-called “accessible luxury” segment of the market. The core prices of the Frédérique Constant and Alpina brands are primarily between $1,000 and $5,000, with some models costing more than $10,000. The company does not divulge sales data, but FC Holding is substantially larger than Prothor Holding. (In 2009, Kepler Capital Markets estimated Frédérique Constant’s annual sales at CHF 150 million and annual production at 90,000 units.) Frédérique Constant also has significant mechanical watch production capacity. It develops, manufactures and assembles its own calibres, 19 of them since 2004, it says.

As with the Prothor Holding acquisition, Citizen will leave  Frédérique Constant’s current Swiss management in place. Citizen has plenty to do managing the Citizen brand, Tokura says, without trying to manage four luxury mechanical brands. “We don’t have the experience,” he says with a smile. “We don’t know that world. It’s such a mystery to us.”

THE WATCH FILES Never before in the company’s history had there been a period of such creativity and achievement. From the first Grand Seiko in 1960 to the automatic (...)