WATCH STRAPS shake off the shackles

Ladies’ watch straps are fed up of playing the weaker sex. They’re back with a vengeance, and with designs, materials and concepts – that have potentially far-reaching consequences. 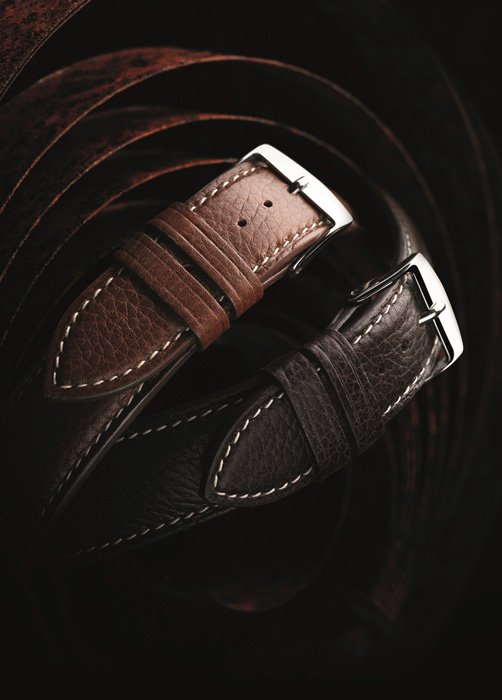 Where watch straps are concerned, the past few decades have been dominated by the Holy Trinity of leather, steel and rubber, the latter sometimes replaced by satin, evoking frocks and ballerina shoes to emphasise a timepiece’s feminine side. Rare were the watchmakers who showed any interest in this anatomical part of the watch: all the attention was focused on the face (dial) and heart (movement).

And so our interest was keen when we discovered the XS version of the J12, cleverly unveiled by Chanel as a set of single watch straps, ranging from supple to rigid. One model has the miniwatch sit on a cuff of precious gems and metals, another on a wrist brace, gladiator-style, or else on a ring, and even on a leather fingerless glove with Lagerfeld-ish connotations. Made by the artisans of Paraffection, Chanel’s arts and crafts arm, these designs are a clever, diachronic collusion between the company’s haute couture and watchmaking domains.

WHEN WATCH STRAPS WERE NOT WRIST STRAPS

Indeed, they inevitably call to mind the exquisite horological objects which, before the armlet espoused the wrist of the determinedly single Elizabeth I of England, were worn on the finger or wherever else was felt fitting. Then, from the period of the French Consulate and the Empire onward, fashion shortened sleeves and watches adorned naked arms. That marked the advent of jewellery watch straps, the use of fabric, reps or shot silk, while in 1810, Abraham Louis Breguet dreamed up for the queen of Naples a repeater watch mounted on a strap of hair interwovenwith gold thread. Soon, watch straps extended into stretch fabric and dabbled in enamel. They entwined the wrist in a snake-like embrace. And around 1950, the “marquise” wristwatch broke down the barrier between show watch and jewellery in the prettiest way possible. With the advent of mass production, timepieces took on a functional role and creative watchstraps became the exception, reserved for jewellers. The development we are seeing today robs the watch of its primary function, but grants it another, and no insignificant one: that of expressing status, personality, singularity. The young brands twigged this, turning a simple, tricolour fabric strap into a remedy – and a cheap one at that – for a moribund market. It heralded a more casual style. Now with watch straps anything goes, all the better to attract a younger customer base. Floral, tropical and plant motifs abound (Laruze), wax and cashmere prints are burgeoning (Charlie Watch, Louis Pion); arty is also in on the act (Komono x Magritte). And flannel – the number one choice for fashion stylists in the 2016/17 autumn collection – is already jostling for a place next to nylon and cotton straps.

The watch strap has at last become part of the story. The same can be said of the collaboration between Fossil and Me to We, a young company selling socially responsible products. It has given rise to watch straps that are “lovingly hand-made by ‘Mamas’, women artisans of Kenya, who use art forms handed down from mother to daughter for generations,” as the brand’s blurb says. But sublime as they may be, creators of desirability, watch straps alone cannot bolster a brand. Remember the furore created at the last SIHH by Les Exceptionnelles, watch straps designedto be an extension of the personality of three modern women, whose every move they accompanied with their long tassels? Are these variations on the theme of the Promesse collection now just dead letters? Unfortunately, we were unable to gain any further information from Baume & Mercier.

By contrast, at Poiray watch straps are part of a real strategy. The exercise is repeated over and over again – a stainless steel strap with drops of paint or an embroidered ribbon with pompons, Brazilian friendship bracelet-style. Even better is the square silk scarf which you can knot “any way you like” around the wrist, in complete osmosis with a counter-culture in which attitude replaces style. The Paris-based brand offers inspiration without dictation while creating scope for personal expression. The buckle system of Ma Première, as the company’s co-CEO Manuel Mallen explains, means you can take the tie of your nearest and dearest or a piece of her wedding dress to create your own, symbol-steeped strap But one question remains. If watches for women become assimilated with fashion accessories, might they not lose something of the soul and timelessness that haute horlogerie is all about? To avoid this pitfall, it would be a good thing if a luxury manufacture were to move into this space and deploy its know-how there. At Vacheron Constantin, we were told that, given the creativity of the company, they could well imagine the arts and crafts taking over watch straps (for women’s models), just as they have done with the dial and case. More in the next exciting instalment. Because the watch strap story is far from over.

* Thank you to Dominique Fléchon, an expert with Fondation de la Haute Horlogerie, for his kind contribution to the historical part of this article.

THE WATCH FILES Not always intuitive to fasten, the clasp is often a stumbling block for the owner of a new watch. So the best thing is to be prepared. But why are there (...)

TIME.KEEPER Hermès is a rare example – the only one, as far as we know – of a saddler turned watchmaker (among other things). In fact, it is through leather that Hermès (...)