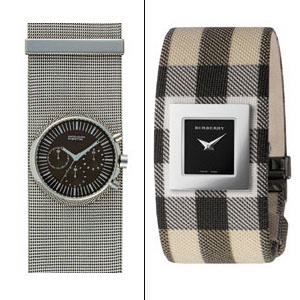 Benetton
More than ten years ago, while Italy was in the midst of the Swatch boom, Benetton had already attempted a first incursion into the world of watches. But this operation dragged on and did not enjoy the success hoped for, as had the clothing of the family-run business from Trevise, which had used very aggressive marketing and advertising campaigns that were then managed by the famous Oliviero Toscani. It was not until 2003 that the brand, emblematic of the casual prêt-à-porter, would again venture into watch territory. This latest endeavour should succeed thanks to the brand's association with the omnipresent and very competent Sector Group. New synergies are at work today, both on the commercial level (Benetton disposes of a world network of boutiques), as well as on the purely design level. We can well imagine what a man such as Franco Bosisio, artistic director of the Sector Group, might well draw from the brand of 'colors'. Bosisio also contributed largely to the phenomenal success of the Swatch Group in Italy and elsewhere in the world.

Burberry
Property of the Great Universal Store (GUS) since 1955, Burberry has enjoyed a strong and rapid growth under the direction of the American Marie Rose Bravo. Declaring that she wanted to copy the approach of the Gucci Group, Bravo intends to transform the venerable brand of trench coats into a nucleus of luxury of primary importance. With a total renewal of the brand and its collections, she accorded the Burberry watch licence to the Fossil Group.
The timepiece collection provides variety with three design groups; Heritage, Signature and Endurance. Heritage draws inspiration from British timepieces of the 1930s and 40s. The hallmark of the series is a sensibility that is straightforward and expressive of fundamentals. The Signature line features interpretations of the Burberry trademark check and can be found in subtle gradations on dials, case shapes and straps. Finally, the Endurance collection combines Burberry's heritage in the world's history of exploration, expedition and adventure of the past century and a half. Swiss chronograph mechanics and stainless steel cases are complimented by field-tested, water resistant construction. 70% of the business is in women's styles. Like Burberry's ready-to-wear, the timepiece collection is a balanced 50/50 men/women.
Burberry timepieces are distributed in approximately 750 doors worldwide: Burberry boutiques, high-end department stores and independent watch and jewellery stores. The majority of business comes from independent watch and jewellery stores followed by department stores and Burberry boutiques.