Operation Cabestan: When two independents come together to shake up the world of watches


Jean-François Ruchonnet and Vianney Halter have combined their talents to present an exceptional watch, one with a truly revolutionary design and a spectacular mechanism. Its name is Cabestan (patented model).

Operation Cabestan: When two independents come together to shake up the world of watches

Jean-François Ruchonnet and Vianney Halter have combined their talents to present an exceptional watch, one with a truly revolutionary design and a spectacular mechanism. Its name is Cabestan (patented model). 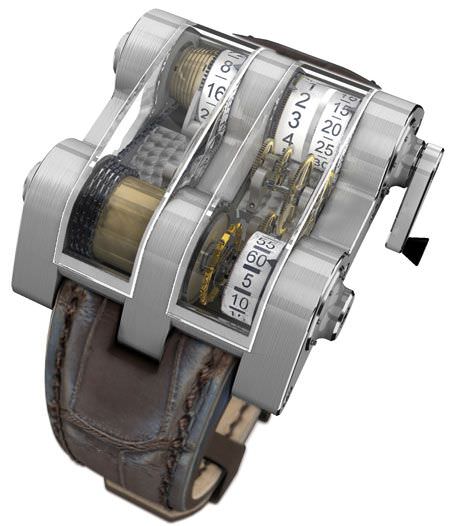 Both of these men are intensely independent; both have strong characters; both are known in the watch world for being outspoken. Yet, they are both also quite different. Jean-François Ruchonnet is a man in perpetual motion, imagining a thousand ideas a second, not able to stand still for an instant. Knowledgeable about everything, ultra-talented, and having started from “zero”, Ruchonnet is recognized as the designer of perhaps the best synthesized images ever seen in the watch domain. His very impressive client list reads like the Who’s Who of the watchmaking industry. But he does not stop there. He is also, quite notably, the inventor and designer of TAG Heuer’s famous Monaco V4 Concept Watch.
Vianney Halter is just the opposite. Calm, serene, fairly discreet, he is one of the most talented and creative young master watchmakers of his generation. Fiercely independent, you must see this artist, of French
origin, at work in his manufacture in Sainte-Croix, in Switzerland. It is a laboratory out of another age, enormously poetic, an improbable cross between the worlds of Jules Verne and Doctor Mabuse. Surrounded by a team of passionate young associates, he takes the craziest ideas and converts them into a type of watchmaking unique in its genre. Among other surprising timekeepers, he is credited with the very innovative Opus III, made for Harry Winston, which is the first watch to totally integrate digital indications on a pure mechanical basis.

Waiting for the V4 and the Opus III
But, apparently there’s a hiccup. As of today, neither the V4 nor the Opus III has been produced in series. Have these two creators imagined something that is wildly “innovative” but “impossible” to realize on an industrial level? The two colleagues are conscious of this “hurdle”, but they are defending themselves: these two watches will really and truly exist in the not-too-distant future. In fact, according to the brands in question, they are adamant that these watches are in the pipeline. The V4 will be sold starting in 2007; its construction has been entirely re-worked in view of its upcoming commercial scale production, and it is currently in test trials at TAG Heuer. The target date for Harry Winston’s Opus III is 2006, and it is currently in its testing phases.
So, with the roads leading to the sales of the V4 and Opus III cleared of their obstacles, our two heroes decided to combine their perfectly complementary talents in order to again surprise, delight, and even shake up the world of timekeeping. But, this is not the first time that these two men have collaborated. Seven years ago, they worked together to create the Antiqua, one of Vianney Halter’s first realizations. With the new Cabestan, however, it is something altogether different. 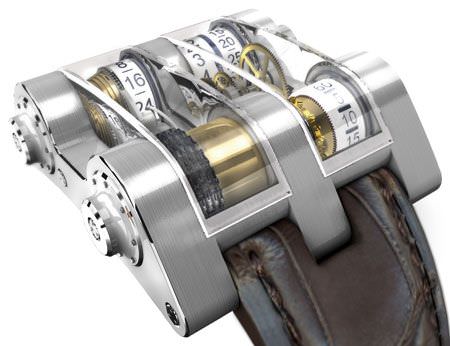 Code name: Cabestan
As Jean-François Ruchonnet (JFR to his friends) declares right up front, “This new timepiece, the Cabestan [capstan] is certainly very spectacular, but it is what I would call ‘techno-design.’ The watch is totally innovative from its design point of view, but on a technical level, it is not as complex as one would think at first glance. Although its construction is very particular, I would still qualify it as accessible and entirely ‘masterable’. In fact, it basically involves a repositioning of elements, which in themselves, are an integral part of traditional watchmaking: a tourbillon, a chain, and a fusee... In the same manner, the majority of the essential component parts come from the traditional assortment. It is the architecture of the movement itself that is unusual, not its individual parts.”

A spectacular architecture
This really spectacular architecture seems to be absolutely original. The mechanical design of the Cabestan, including its tourbillon, is totally transversal. The indications (hour, minute, seconds, and power reserve) appear on the cylinders located at the four “corners” of the watch.
Starting from the lower left, we find the barrel, which transmits its driving power to the movement by the intermediary of a chain. This chain is connected to a second cylinder, at the upper left, made up of one part of a fusee (placed horizontally as opposed to the traditional fusees that are always vertical), and the other of the cylindrical power reserve indicator (a total of 72 hours).
Still on the upper end, but this time on the right, we find two cylinders next to each other, providing the perfectly readable hours and minutes. In the lower right hand corner, we can see the tourbillon, which is also placed vertically and is directly linked to another cylinder, which quite logically gives the seconds indication, as the tourbillon makes one rotation per minute.
This completely original mechanical movement, with manual winding, a fusee and a tourbillon, integrates six ball bearings into its operation. It is also water-resistant to 30 metres. The entire movement is visible from above and from the side, under a double sapphire crystal (“Trimaran” model) with three recessed and curved sides, taking the form of a “hood”, all in a very sturdy design.
Winding the watch and setting the hour and minutes are effected using a winding stem in the form of a movable “winch” that links directly to one of the small “capstans” that are found at the four exterior angles of the case: at the upper left, it acts directly on the fusee and, by the intermediary of the chain, allows the barrel to be wound; at the upper right, it acts on the minute cylinder which is connected to that of the hours. The two other small “capstans” are only there for decoration and to complete the aesthetics of the case. Once the small winch is used, it is easily stored in the buckle of the watch’s bracelet.
This model (patent applied for in 2003), will be realized in a limited series of 135 pieces, of which 15 are in yellow gold, 55 in rose gold, 50 in white gold and 15 in platinum. Its dimensions are 46 mm in length, 36 mm in width, 15 mm in thickness, for a total weight of 230 grams.

Trilogy
From a design point of view, this surprising watch seems to thoroughly follow the nautical theme that it evokes, whether in the general shape of the piece, the “bridge” (dial) that is visible under the sapphire crystal, the use of the chain that denotes the chain of a boat’s anchor, or even in the capstans and winch.
The marine inspiration comes from a design trilogy that Jean-François Ruchonnet intends to carry out. “The inspiration for the V4 was the Earth and the automobile. For the Cabestan, it is Water and maritime activities. I have a third piece, waiting in the wings, which is totally innovative and dedicated to Air and aviation,” he says.

Intersecting competencies
The role sharing between the two project initiators is clear, as Vianney Halter explains, “It is a very balanced relationship because it is between two independents whose competencies intersect and are mutually supportive, which is not always the case when an independent such as myself has in front of him a large enterprise where relationships are therefore necessarily not balanced. JFR came with the project and it was up to me, as a watchmaker, to make it happen. However, to succeed, I needed the help of not only my own team, but also the support of his team, involving designers, constructors, and a commercial group, which I, alone, do not have.”

Exclusive Edition
The Cabestan is an exclusive timepiece not only due to its innovative architecture but also thanks to the choice of an edition strictly limited to 135 pieces, to be delivered from end of 2006 up to the beginning of 2008.
Hour, minutes, secondes, tourbillon and power reserve will take place inside this time vessel, selling for around 220,000 dollars.
The totality of the collection will be made in gold and platinum, and all will be water-resistant to 30 metres.

Open orders
One functional prototype will be presented at Baselworld 2006, and a pre-series of the first ten watches is planned for the end of 2006. These watches are now ready to be ordered through Vianney Halter, at Janvier SA in Sainte-Croix. Attention collectors, and those who love unusual objects !
This somewhat crazy adventure demonstrates that the most visionary independent watchmakers are often the source of watchmaking’s vitality, and of the renaissance of mechanical haute horlogerie. 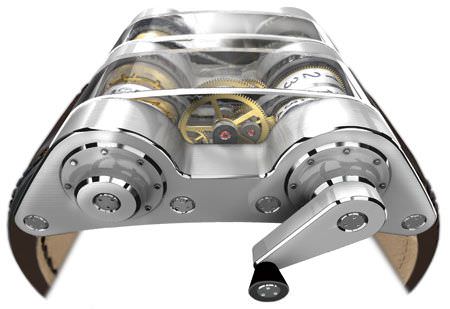