Rudis Sylva, a young brand with a long history


Rudis Sylva, a young brand with a long history

While many watch brands have used and abused the word ’authenticity’, Jacky Epitaux never mentioned it during the whole day we spent together. He had no need to use it because it would have been stating the obvious. The man lives and incarnates ’authenticity’.
He certainly can claim the region where we visited him, the Franches Montagnes, as his own. He was born here; he lives here; and he is ’inhabited’ by it in the most profound sense of the word. He knows every inch of forested terrain, every local farm, every meandering path. It was thus quite natural that here, to the east of La Chaux-de-Fonds, between Les Bois, where he was born, and Sonvilliers and SaignelÉgier, was where he decided to establish his brand, Rudis Sylva.

’The ladders of death’ on the French part of the Doubs river, were used for smuggling watches into Switzerland.
The Huot factory around 1860
Emile Huot


Harsh climate
The name Rudis Sylva is the ancient name for the village of Les Bois. In 1387, a man named Ruedin settled here, and was one of the first to begin clearing the forest. The term Rudis Sylva came from Latin and means ’The Forest of Ruedin’. The region itself was called ’Franches Montagnes’ because everyone who settled here at that time was exempt from taxes.
But the winters were long and harsh. The small farmers and the men who cleared the forest thus had to take on other work during this ’dead’ season, mostly in ironwork and locksmithing. Around 1730, farmers crossed the wild Doubs river below the village of Les Bois, which separated the Franches Montagnes area from the French region of Franche-ComtÉ, and introduced watchmaking to the area. They then became the early ’subcontractors’ who delivered their products to watchmakers in La Chaux-de-Fonds. Starting in 1852, the Huots made anchor and cylinder escapements, and the Baumanns fabricated cylinder escapements. So many other people were involved in watchmaking that by 1902, of the 1,400 inhabitants of Les Bois, 600 worked in timekeeping and made as many as 30,000 timekeepers per year.
In 1916, a dozen of these small companies joined forces and established FAR—Fabricants d'Assortiments Réunis—that manufactured various watch products. FAR ultimately gave birth to Nivarox, today a part of the Swatch Group, which produces more than 90 percent of Swiss mechanical escapements. As for the Baumanns—they started Baume & Mercier.


History’s revenge
Jacky Epitaux tells us this history—or even relives it in a way—with extraordinary passion. After having worked nearly 11 years at Dixi, a maker of machine tools, Epitaux moved to Zenith, which was owned by Dixi at that time. There, he worked with François Manfredini and Didier Leibundgut (today, Leibundgut is owner of Pequignet, see Europa Star 2.09) to reposition the brand around its famous El Primero calibre. While at Zenith, the young man fell in love with fine mechanical timekeeping and the arts and skills associated with it. When Zenith was acquired by LVMH, he moved to the R&R holding company, becoming its Vice President of Sales & Marketing. R&R owned Roamer, Caterpillar, Bruno Banani and Rodolphe.
When his friend Rodolphe decided to go independent and position his brand in the haut de gamme, Epitaux became CEO of the new company, setting up shop, quite naturally, in Les Bois. But the wheel made another turn and Rodolphe entered the fold of the Franck MÜller group.
This was the trigger that finally pushed Jacky Epitaux to create his own brand—Rudis Sylva. History had its revenge. “This region has always exported its savoir-faire,” explains Epitaux, “so why not try to enhance its image and totally produce our watches here”. He recounts this story while we are standing in front of a magnificent farm in Les Bois that belongs to his uncle. Its façade, with its alignment of small windows, behind which watchmaker-farmers toiled during the daylight hours, bears witness to its past. Above, sits one of the most beautiful sundials in Switzerland, dating back to 1750. As the sun shines through a passing cloud, we can see that it is surprisingly accurate. On its surface is painted the philosophic saying, ’Ultima forsan’ (’the last hour, perhaps’ in Latin). This sundial has also been faithfully reproduced by hand enamelling and engraving on the back of the Oscillateur Harmonieux, the first and fascinating timepiece by Rudis Sylva.

The Oscillateur Harmonieux, a world first
The major innovation of this timepiece is the one that gives it its name. Contrary to all watchmaking theory, which says that the balance must be free from all constraints, the Oscillateur Harmonieux is composed of two complete and toothed balances, which are connected to each other but driven by a single escapement and thus a single escapement wheel. In this way, the pallet gives the impulsion to the first balance that, in turn, provides an impulse to the second balance.
The two flat balance springs in the two balances operate in an asymmetrical manner. When one closes, the other opens, like two hearts whose beats alternatively compensate for each other. They use a principle comparable to that of resonance but, unlike the ChronomÈtre À RÉsonance by FranÇois-Paul Journe, it is a mechanical ’resonance’ (and not one created by an atmospheric effect), since each barrel is in contact via its teeth.
The permanent and symmetrical opposition of these two balances allows an instantaneous average correction in a vertical position (contrary to that of a tourbillon that requires a minute for correcting). This then eliminates the effect of gravity. The result is identical and quasi-constant amplitudes whether the watch is in a vertical or horizontal position. With its two balances mounted on a rotating plate, the precision of the Oscillateur Harmonieux, ver-ified by measurement, seems to be largely superior to that of tourbillons, even the classic carrousels.
The idea for this Oscillateur Harmonieux—which seems to contradict the rules of classic timekeeping—comes from the imagination of Romain Gillet, a descendant of a long dynasty of farmer-watchmakers, then of watchmakers in the French Haut-Doubs region who finally settled in the Swiss Franches Montagnes.
But it was an inhabitant of another snowy country, Finland, who actually developed this idea and took it to fruition. Mika Rassinen, an expert in complicated movements, and now working exclusively for Rudis Sylva, succeeded in creating an operational model. The first and very limited series of these timepieces will be completed in the near future by the addition of a chime. 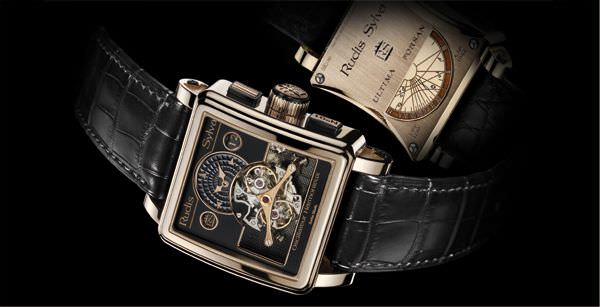 
Fabrication autonomy
Not far from there, in SaignelÉgier, the company Swiss Finest SA tooled and finished all the component parts of the Oscillateur Harmonieux. Directed by Fabrice Thueler, also a shareholder in Rudis Sylva, this centre, specializing in machining, milling, stamping, electroplating, rolling and cutting, manufactures the most complex components for an impressive roster of names in the Swiss haute horlogerie sector. Although we unfortunately cannot publish them in light of the rules of confidentiality, you would be surprised, even stupefied, to learn which brands are on the list.
With the exception of the escapements (Nivarox), balance springs (GÉnÉrale Ressorts), Incabloc and the gemstones, all the other parts of the Oscillateur Harmonieux’s movement, including the screws, are made by Fabrice Thueler. As Thueler himself explains, he “was a working man who bought an automatic lathe and set up shop in the back of his garage. It all began like that.” Today, he is at the head of an impressive production company, which will soon move not far away, to Noirmont, in a brand new factory built in front of the master’s house that will be the future headquarters of Rudis Sylva.

Superlative finishing
This brief portrait of the Oscillateur Harmonieux would not be complete without a last word on the quality of the finishing and decor-ation of its movement. They can only be described as superlative: chamfering and lines all hand-made with rounded corners; guillochage realized by hand in SaignelÉgier by Georges Brodbeck, composed of sliding trapezoids inspired by the ’pine tree style’ developed in the Art Nouveau spirit in La Chaux-de-Fonds during the 1900s by Georges L'Eplattenier (who was the professor of Le Corbusier, among other things); burin engraving; enamelling etc.
To summarize, everything in this watch comes from the Franches Montagnes region. This certainly gives it an aura of authenticity—a word, that here for once, is not overused.