Recently, Europa Star went to visit the largest Chinese watchmaker, at least in terms of volume, since its Ebohr and Rossini brands account for 23 per cent of the domestic market. Focused on the lower-end of the market, the group is now looking to advance into the mid-range with a number of new collections including Codex, a new Swiss Made brand. Tao Li, the group’s General Manager, talked to us about this strategy

Recently, Europa Star went to visit the largest Chinese watchmaker, at least in terms of volume, since its Ebohr and Rossini brands account for 23 per cent of the domestic market. Focused on the lower-end of the market, the group is now looking to advance into the mid-range with a number of new collections including Codex, a new Swiss Made brand. Tao Li, the group’s General Manager, talked to us about this strategy

The Chinese industry is entering into a new era, that of emancipation. Everywhere, it is investing in research and development, while also finally learning to design and communicate. The catching-up phase (did someone say ‘copying’?) is finally coming to an end. We are already seeing this in the automobile industry where, of a hundred or so Chinese brands, there will soon be only a handful—some of which will become future giants.
The same evolution is being seen in the watch sector with three groups in particular: Sea-Gull (founded in 1955, headquartered in Tianjin), FIYTA (1987, Shenzhen), and Ebohr (1991, Shenzhen). What are their goals? To carve out a market share in the lower and mid-range, especially in Asian markets. Tao Li, the Manager of Ebohr, welcomed us to his manufacturing facility in Shenzhen and talked about the original strategy of the group, now composed of several new brands, tourbillons and Swiss Made.

Europa Star: What is behind the Ebohr brand?
Tao Li: China Haidian Holdings, listed on the Hong Kong stock exchange, is the owner of the watch brands, Ebohr and Rossini.

ES: Is the group involved in other industries that have nothing to do with watches?
TL: Yes, this is still often the case with Chinese groups. But we are going to sell our copper wire production factories in order to concentrate on only one sector, watches.

ES: Could you explain a little about your development of the brands such as Rossini and Kana?
TL: The Rossini brand has been around for 25 years and is Number One in terms of sales in China, with more than 12 per cent of the market. It is our basic model, made in Zhuhai, south of Hong Kong. On the other hand, Kana is a new brand for the ladies, which has been developed in cooperation with Swarovski. These models are set with natural gemstones such as ruby, sapphire, topaz, black spinel, amethyst and garnet.

Attaching the sapphire crystals to a watch in the Gold collection, setting topaz on a model from the Kana brand and Tao Li, General Manager, with members of the management team. (Photo D.R.)

ES: What is the watch you are wearing?
TL: Ah, you noticed it. It’s true that it is very large. The case alone weighs 150 grammes. It is a Codex, a new Swiss Made brand from the company Swiss Chronometric, located in Bienne, of which we are shareholders. Here, I have two pre-series models.

ES: Will this watch be entirely produced in Switzerland? What is Codex’s target market?
TL: Except for the cases and the documentation that comes from China, all the rest is made in Switzerland. Codex is positioned on the same level as Longines and is targeting the global market, but with China as its priority.

ES: It is quite large while the current trend is a return to the ultra-flat watch…
TL: Yes, we noticed this trend at the last BaselWorld show, and we are also exploring this avenue. Still, however, Codex aims to be a very masculine watch as its slogan suggests: ‘Codex, Men Addiction’. On the inside is a solid ETA movement.

ES: Nicolas Hayek, President of the Swatch Group and, by extension, its subsidiary ETA, wants to discontinue supplying movements to all the small brands that are proliferating in Switzerland…
TL: (laughing) This is not the first time that Hayek has said this. Besides, this threat does not frighten us since there are other movement suppliers in Switzerland.

ES: Coming back to Ebohr, how many watches did you sell in 2009 and what was the average price?
TL: Ebohr has sold about 600,000 watches at an average price of 1,000 yuans (150 Swiss francs). Our short-term goal is to increase the average sales price to 2,000 yuans. To do this—in addition to our Gold, Classical, Automatic, Tungsten, and Slim series—we are going to create the Ebohr Complication range, with a specific logo and design carried out in Switzerland.

ES: What type of movements will these new pieces have?
TL: Automatics and tourbillons.

ES: I have a little trouble believing that Ebohr is going to start making tourbillons…
TL: We will have three suppliers: Sea-Gull for the twin tourbillon; Beijing for the vertical tourbillon and Shanghai for the flying tourbillon. Note, also, that Ebohr will rework the style of each calibre.

ES: That’s nice, but it will cost a fortune. Can your clientele afford such watches?
TL: (laughing) These watches will be affordable because we are planning on selling them for 10 per cent of the price of comparable Swiss watches. Soon, we will introduce a basic tourbillon timepiece for 10,000 yuans (1,500 Swiss francs). There is a real market for low cost complicated watches and Ebohr is looking towards the global market.

ES: How can your suppliers lower their prices to such an extent?
TL: The three movement suppliers I mentioned earlier are real specialists in the fabrication of complications but they cannot increase their production through only their own watch brands. Yet, they have the capacity to produce many more pieces and so they can lower their prices. We are going to help them.

ES: Why does Ebohr, like the other Chinese brands, only follow the trends of Swiss watchmakers?
TL: It is because Swiss watch brands create the watch trends for the entire world. This is a simple fact. 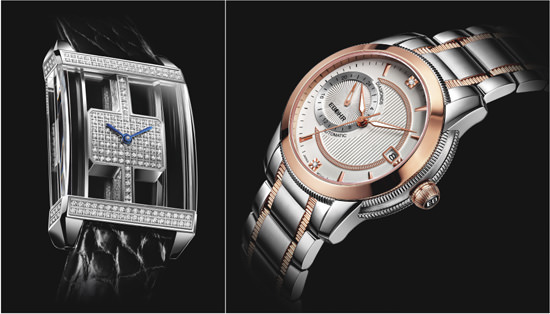 ES: You are in Shenzhen, the new world capital of electronics. Why not develop high-tech movements, such as atomic, photoelectric, electrodynamic or even thermoelectric types?
TL: Guangdong province is also a historical watch zone. But I understand your reasoning. In the domain of sophisticated electronic movements, the Japanese brands have such an advance that we would never catch up to their level. In any case, Chinese people like mechanical watches. In one year, the proportion of our automatic models has gone from 20 per cent to 40 per cent. When they buy a watch, people are not looking to have the most exact time possible. There is no race for absolute precision in watchmaking. If there were, atomic watches would have become the standard a long time ago.

ES: “It would be irrational to buy a watch to tell time!” declared Jean-Claude Biver, owner of Hublot, in regards to his brand’s All Black model, which is completely black—the dial, the case, the bracelet and even the hands…
TL: He is right and the proof is that logically watches should have already disappeared during our era since we have time everywhere—on our cell phones, in our cars, in the streets, in our houses and on nearly all electrical appliances. This demonstrates the very special relationship that people have with this type of jewellery. To have something more ‘alive’ and more ‘human’, you need a mechanical watch.

ES: Why do watches made by Chinese for Chinese have nothing Chinese about them? Why not draw inspiration from the Chinese culture, a culture that is so rich and so refined?
TL: The difficult times of the Cultural Revolution have destroyed our tradition and our culture. No one in China wants to return to the past. Currently, thanks to an open policy, the nation is going through a crazy period with a rapid change in lifestyle. Everything is new. Everything is fresh. People are finally allowed to exist, sometimes to excess.

ES: In the West, we often think of China as a sleeping dragon whose awakening provokes fear. The China of today has obviously sold its soul to Western culture, especially to American culture. The Koreans and the Japanese would never have accepted such a cultural invasion…
TL: What you say is totally true. Once again, many generations of Chinese have been sacrificed. The new generation are better educated and wants to finally enjoy life and be in fashion. For them, Western culture provides all of this.

ES: Contrary to FIYTA or Sea-Gull, Ebohr does not have a widespread sales network in the country. How are you going to sell your watches?
TL: Currently, we have only three Ebohr stores in China. By the end of 2010, we will have 40. We sell mainly through multi-brand stores. However, we believe more and more in direct online sales, B2C, business to customer. We are developing a platform that will allow us to not only present our products and meet the demands of our clients, but also to allow us to have a DIY, Design It Yourself, option. The client can thus configure his future watch by choosing the various pieces that go into it. Thanks to our flexibility in production, we can realize this made-to-order piece in two or three days. Finally, we are using our e-shop on Taobao (the Chinese equivalent of eBay) to sell our older models at a hefty discount.